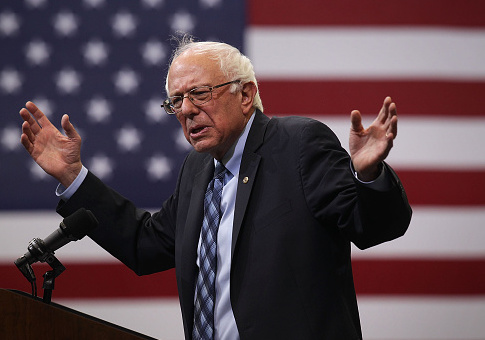 At yet another packed rally on Sunday in Oskaloosa, Iowa, Bernie Sanders took a firm and unequivocal position on the question of open borders. He said,  “If you open the borders, my God, there’s a lot of poverty in this world, and you’re going to have people from all over the world. And I don’t think that’s something that we can do at this point. Can’t do it. So that is not my position.”

This position by Sanders should come as no surprise. After all, he dragged his feet on calling to abolish ICE, instead calling to restructure it. He voted to fund the border wall, as well as to provide funding for ICE. Furthermore, he has been especially bad on international issues: speaking out against the BDS campaign and supporting the Trojan horse of “humanitarian aid” to Venezuela, providing a left cover for the Trump administration’s attempted coup there.

Although Sanders started out as an underdog in the 2016 elections, his 2020 campaign has started off with a bang. So far Sanders has raised more campaign contributions than any other Democratic nominee, and he continues to pack parks and stadiums around the country. Hundreds of thousands of people, disillusioned with corporate-backed  Democrats and angry at the hateful and xenophobic policies and rhetoric of the Trump administration, have flocked to Sanders, seeing him as an alternative to the neoliberal status quo. Yet, Sanders has made efforts not to ruffle too many feathers in the Democratic Party establishment, regularly voting with center and right wing Democrats on key issues, especially “border control” and funding for war.

In this respect, Sanders comments are consistent with his broader politics of soft imperialism. Indeed, for Sanders, it seems that poverty is merely incidental and that the massive number of people flocking to the US has nothing to do with the very same foreign policy he too frequently supports or provides cover for.

Immigration to the US doesn’t happen in a vacuum; it is a direct product of US imperialism and the many US sponsored military interventions around the world, organized against democratically elected leaders. These coups in countries such as Nicaragua, El Salvador and Honduras, and attempted coups in places like Venezuela and Cuba, have the goal of imposing austerity measures and providing more favorable conditions for US companies to continue to exploit Latin America’s people and natural resources as they have for centuries.

The dynamic between immigration and US intervention was evident in the most recent migrant caravan, which brought thousands of people to the US border from Honduras. In 2009, the Obama administration supported a coup against Honduran President Juan Manuel Zelaya, who had raised wages, increased pensions, and allied with other Pink Tide governments in Venezuela, Ecuador and Argentina, as well as with Cuba. The right-wing coup imposed worse conditions for the working class and more favorable conditions for the US corporations and the “War on Drugs”, securing a US foothold in Latin America during the Pink Tide wave and fueling the poverty and violence that drove families to make the long and difficult journey from Honduras to the US on foot. Stories like this are repeated in country after country across Latin America: immigration is a product of US imperialism, austerity and intervention.

Many people, angry about Sanders’ comments, are accusing him of only caring about American workers. But a politics against open borders isn’t a politics for the US working class. It’s a politics for capitalists. The divisions between documented and undocumented workers serve the capitalists, not the proletariat, driving down wages for all workers. As Jimena Vergara and Luigi Morris argue in Nagle Is Wrong: There Is No Left Case Against Open Borders:

“The workers who migrate from their countries of origin to the imperialist metropolises are integrated into the labor market as second-class citizens: without rights, without benefits, without anything. This allows employers, on the one hand, to access cheap labor, and it makes organizing the workers exceedingly difficult and dangerous. On the other hand, this cheap labor force without rights lowers wages of the native working class.”

It is immensely profitable to keep certain groups of workers in hyper-precarious, hyper-exploitative labor conditions, and it drives wages down for all workers. We see it all the time. Why would a capitalist hire a documented worker if he can get an undocumented workers labor cheaper?  This is why the capitalist class, both Democrats and Republicans, have had such xenophobic policies against the 11 million undocumented immigrants in the US.

As far as capitalists are concerned, open borders are for products, not for people. That is why agreements such as NAFTA are incredibly profitable: while Mexicans are not allowed to cross into the US, the cheap products made by Mexicans in maquilas cross into the US with ease.

On the other side, some Sanders defenders have argued that open borders would kill his chances of a presidential victory and that he therefore has no choice but to oppose them. But this response is just a cynical maneuver to shut down discussion and outrage over nationalism and xenophobia among the ranks of Bernie Sanders’ supporters. Worse, such a  response works to normalize and thus excuse the nationalism and xenophobia of the Trump administration, as if to say: yes, Sanders is a nationalist, but we agreed not to care about this, so stop talking about it.

Sanders’ backward views on immigration are creating uncomfortable contradictions for the thousands of young people who support him but also support undocumented immigrants, abolishing ICE,  even open borders. It is also already creating tensions among the rank and file of the country’s largest socialist organization, the DSA, which has previously organized marches to abolish ICE and for the migrant caravan, who printed countless posters calling for open borders, and many who even went to Tijuana to support the migrants there. How can that same organization, which is in support of open borders, campaign for someone who is against it?

While none of us should be especially surprised by Sanders’ statements, we should expect that all socialists will be disgusted  by such ugly displays of xenophobia and nationalism and wonder, perhaps even out loud, whether it makes sense to be associated with a politician who actively speaks against and votes against the things we believe in and fight for.

As the primaries get closer, Sanders is likely to continue to move further to the center on issues like immigration and foreign policy, in order to paint the picture of himself as a responsible progressive. That is why Left Voice has argued against support for Sanders: not only because it goes against socialist principles, but because it seems to be shooting our movement in the foot. If we are going to register people to vote, knock on doors and talk about socialism, we should do it for an independent socialist candidate who puts anti-imperialism at the center.

The struggle for socialism can’t be built on the backs of the most oppressed and exploited amongst us. Our response must be to demand, to push for, and to build a socialist movement that is about uniting both the national and international working class against our common enemy: the capitalists who exploit and oppresses us at home and abroad.