Bernie Sanders: Work with or #ResistTrump?

Hundreds of thousands of people took the streets this weekend against Trump. What does Bernie Sanders propose? 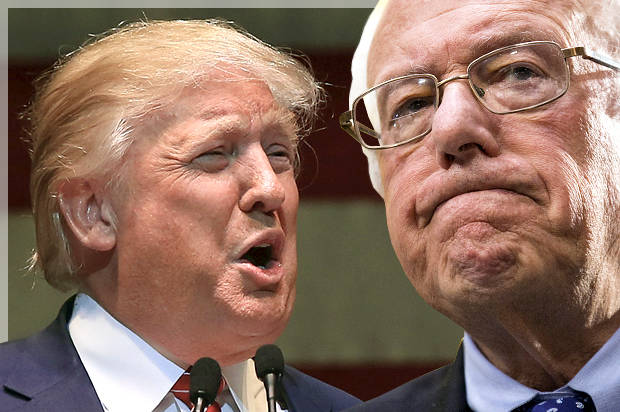 Last year, Democratic senator Bernie Sanders garnered the support of millions of workers, young people and women who had had enough of the political establishment. For the first time in recent history, U.S. voters widely supported a self-proclaimed socialist in a presidential race.

Bernie Sanders’ popularity is a reflection of the changing world order and a shift in the mentality of millions of Americans. In the words of Julia Mead of The Nation, “But what, besides global nationalism, can replace it? [The repudiation of globalization] The answer is clear if we look at the 2016 election from its inception. The race we should be remembering is not just Clinton versus Trump, but Sanders versus Clinton. For nearly a year, millions of Americans supported an avowed socialist, and many of those people were young—like me. This new New Left renaissance isn’t confined to the United States: Our British neighbors witnessed a similar wave of enthusiasm for Jeremy Corbyn”.

You may interested in Does Bernie Sanders represent the U.S. left?

What is already a phenomenon in central countries like the United States and the United Kingdom is the political expression of a generation that grew up amidst the economic crisis of 2008 and participated in the youth uprisings that broke out in several parts of the world from 2011 to 2014. Particularly, in the US, the Occupy Wall Street movement against the 1% took shape, as well as mass mobilizations against police violence. It is a generation that did not experience the Cold War and is not burdened by the baggage of the fierce anti-communist campaigns that characterized US governments throughout the second half of the 20th century.

The big question is if this generation, which took to the streets with the rallying cry “Not my president!” is really represented by Bernie Sanders, who after the election has been more concerned about demanding that Trump fulfill his campaign promises and dallying with Trump’s base than about organizing resistance against him. He went so far with this stance as to say to the press that “To the degree that Mr. Trump is serious about pursuing policies that improve the lives of working families in this country, I and other progressives are prepared to work with him. To the degree that he pursues racist, sexist, xenophobic and anti-environment policies, we will vigorously oppose him”. Sanders even attended Trump’s inauguration while only blocks away, protesters suffered police repression.

Prior to the Presidential election, Sanders had told the press that Donald Trump was “a pathological liar.” He also opposed Trump’s plans to deport millions of undocumented workers from the United States and vowed to work in Congress to defend the Affordable Care Act, which has become one of the main targets of the GOP.

“[Obamacare] has problems, but we damn well are not going to see it repealed and have no replacement there at all,” he said to the media.

You may be interested in Death to Public Programs: Pro-Privatization Hawk to Head Medicaid

After the primaries, Sanders let down a considerable part of his electorate by publicly backing the candidacy of his formal rival, Hillary Clinton. This disappointment took shape in the Democratic Convention when Sanders defended Hillary Clinton on the first day and was booed by many of those present. Sanders’ support of his adversary was especially disappointing to the Sandernista base because it was on that day that the scandal broke out about the DNC’s manipulation of the primaries to ensure Clinton’s victory.

Clinton, who is part of the right wing of the Democratic Party and very much a part of the repudiated U.S. establishment, won the popular vote against Trump by an ample margin but was nonetheless unable to seduce this new generation that has filled the ranks of Sander’s social base.

You may be interested in Breaking Up with Bernie

Sanders surprised many in his base and beyond when, once Trump won the elections and in the midst of the spontaneous protests that had sprung up against him, he declared that he was willing to work with the President elect. Like Hillary Clinton, in his first post-election speech, he failed to make any mention of the anti-democratic electoral process that has been used for decades to trample on the country’s popular vote.

But after his victory, Donald Trump chose a cabinet that thoroughly represents the US establishment, provoking a rise in popular opposition against him and giving a clear message to the country about in whose interests he will be governing.

According to Forbes magazine, it will be the richest cabinet in contemporary US history, with a combined fortune of $4.5 billion. Can there be any doubt that the new government is part of the 1% repudiated by Occupy Wall Street?

Since his inauguration, Trump has issued executive order after executive order attacking oppressed people- attacking the right to abortion, moving forward on building the Keystone Pipeline and the Dakota Access pipeline and more. Also, he also officially pulled the US out of the TPP deal, a move that Sanders praised. Sanders said, “Now is the time to develop a new trade policy that helps working families, not just multinational corporations. If President Trump is serious about a new policy to help American workers, then I would be delighted to work with him.”

Apparently, Sanders’ intention in the past few weeks has been to make himself heard among the white working class that voted for Trump after being hit by the economic crisis and precarious work conditions. Now, Sanders is holding the President to his campaign promises: “Mr. Trump, that’s what you said on the campaign trail, that’s what we look forward to seeing from you.” This position has driven him further away from the sentiment of the people who took to the streets this weekend under the banner #ResistTrump.

In the face of the President-elect’s threats to deport 3 million undocumented immigrant workers, build a border wall to be paid for by Mexico and defund reproductive health programs, and his fiercely racist and misogynist statements, Sanders has taken a lukewarm stance that is contrary to the sentiment of hundreds of thousands of workers, young people and women.

Donald Trump threatens to impose steep tariffs on multinational automakers that they keep manufacturing jobs in Mexico, reaping billions in profits from cheap labor. In response, Bernie Sanders stated: “We need to re-instill an ethic of corporate patriotism,” as if large corporations, many of them represented by the new cabinet, share any common interests with the thousands of workers who have lost their jobs in the United States.

You may be interested in Sanders Supports “Corporate Patriotism”

The “socialist” senator’s call during his election campaign for workers to fight against the big corporations has turned into a call to solidarity between American and Mexican workers’ against their common adversary, large corporations. In the face of Donald Trump’s nationalism, we don’t need “corporate patriotism,” but internationalism.

Sanders definitively showed which side he was on on January 20, when people all around the world took to the streets to protest Trump’s election. In Washington DC, a heavy police presence plagued protesters and 200 people were arrested. Instead of joining those protests, Bernie Sanders sat next to John McCain to watch in silence as Trump became the next President of the United States.

Sanders did not even show himself to be in the most combative wing of the Democratic party, as 66 Congressmen and women refused to attend the inauguration ceremony. Bernie Sanders was not one of them, demonstrating that he is not on the side of the millions of #ResistTrump protesters, but rather, on the side of the political establishment and their formalities.

Friends and enemies
Yet, there is a new generation that is disgusted by capitalism and that has been drawn to the idea of socialism; that is furious that eight people hold the combined fortune of half the world’s population. This is a generation that understands that the current system, based on the exploitation of the many by the few and the domination of the oppressed, deserves to perish.

The Democratic Party is no ally of the working class, youth or women, having advanced in the privatization of healthcare, increased precarious living conditions for millions, conducted mass deportations of Latino workers and bailed out capitalists in the midst of the crisis at the expense of the impoverished masses. Yet, Bernie Sanders not only ran in the Democratic Party primary, he voted with the Democrats 95% of the time.

US workers divided by the racist and xenophobic ideology of the ruling class must clearly fight on the side of the oppressed and exploited. In this endeavour, they have a powerful ally in the black and Latino workers’ movement, if they can identify their true enemies — the 1% that lives off the exploitation of millions. They must join in voicing the demands of oppressed peoples in American semi-colonies against imperialist domination perpetrated by Democrats and Republicans alike.

Today’s youth have nothing to thank capitalism for. They are the youth that came together at Occupy Wall Street in the US, protests against the murders in Ayotzinapa in Mexico, and on both sides of the border, organized protests against Trump. This is the generation called to tear down walls, destroy borders and build a socialist alternative on both sides of the border.