Between crisis and discredit, elections are approaching in Mexico

In the final stage for elections, new instability elements are going through the national politic scenario . 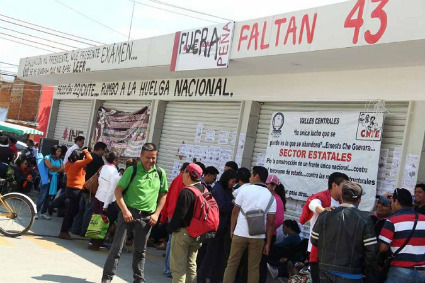 Teachers in the scene one more time

Although in the previous weeks instability in electoral scenario was related to narco-traffickers , army and federal police violence, candidate murdering and different corruption scandals (like the OHL one),last days are marked by the irruption of teacher’s demonstrations.

As accorded at the National Representative Assembly (NRA) of the School Workers National Coordinating Committee (CNTE, for its initials in Spanish) it resolved to start a undefined strikes in Oaxaca, Chiapas, Guerrero and Michoacán states from this June the 1st, calling teachers from other states for striking –like it was done in Veracruz- and for mobilize, making a thousands’ demonstration in México City.
Among the main CNTE demands, the annulment of the structural reforms stands out. One of them is the Educational Reform.

As a result of the NRA too, the CNTE resolved to encourage actions for boycott the June 7 elections, therefore, this Monday teachers from Section 22 took the Local Joints of the Electoral National Institute, in some Oaxaca’s regions and burned ballots and electoral supplies. Meanwhile, in Guerrero, radio stations were taken.

Teacher demonstrations were carried out despite the announcement from the Public Education Secretary about the undefined stoppage of the Teaching Evaluation, that it’s seen by many people as a governmental maneuver for deactivating the teachers´ actions facing the elections. All of this, after the f the Government Secretary announced the existence of “red lights” in some States.

In response, the National Institute for the Teaching Evaluation, stated that this announcement violates its autonomy and disobey the Educational Reform, showing that the decision of suspending the Teaching Evaluation was taken by the top governmental leaderships and in a uncoordinated form. This, however, shows before millions of teachers that the implementation or not of the Educational Reform it passes for complete political decisions, reopening in this way the discussion about how to bring it over by means of the st
ruggle.

On their behalf, entrepreneurs rapidly gathered together in the Entrepreneur Coordinating Council (ECC) stood up the Educational Reform do they considered the most important of the structural reforms, because it represents the introduction of business efficiency guidelines of the contents and management of the public educational system, the education veiled privatization and the fierce state control of teachers.

At a ECC´s press conference, stood up Claudio X. González, president of Mexicanos Primero an entrepreneur organization linked to Televisa dedicated to defame the teachers fight and one of the principal promoters of the Educational Reform.

There, the business men put into word their “condemn to any action that prevent from the election fulfillment” – in a clear reference to the CNTE, Showing themselves hypocritically as the “democracy” defenders meanwhile the actually are urged to impose the stability do their business require for continuing a calm down millions of workers exploiting .

In the meantime, on the electoral terrain, the National Electoral Institute (INE as initials in Spanish) continues showing itself as an anti- democracy instrument: after cut down from twelve to three days the propaganda discontinuing in radio and TV stations for the Verde Ecologista de México party, nowadays the Electoral Court voted to reduce newly the penalty till only one day.

In the other hand, the spotting war between the Revolucionario Institucional and the Acción Nacional parties was transformed into a physical fight at the campaign closures in Yucatán, where a PAN supporter turn out died, showing the enraged attitude with those parties contend the right to manage the capitalist business.

A few days before the election, the mistrust for parties and institutions is maintained. Clear signs of this are the increasing actions of electoral boycott and that wich many people predicts: an increasing of the invalid ballot calling.

But it expresses also this discredit the fact that different population sectors would vote for independent candidates. More over the political view they rise up, it’s a symptomatic fact that shows the suspicion on the political regime‘s traditional parties.

In the current context and as a sample that is emerging a broad movement that repudiate the electoral trap, it spreads out a broader debate among those who give place to the regime on its intent of legitimize trough the ballot boxes, like Morena, and those who stand the need of give an independent response, either the abstention, the boycott or the vote annulment.