Democrats have accepted major cuts to Biden’s already-inadequate climate and social-spending plan, once again showing that the interests of big business come first for the party. 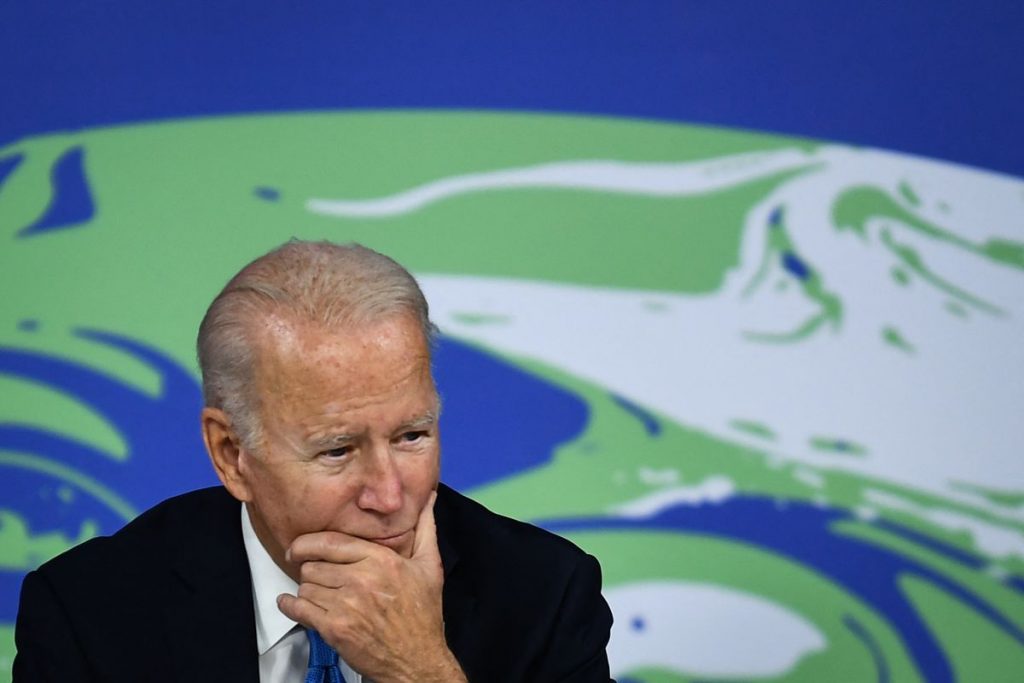 Build Back Better was supposed to solidify Biden’s legacy as a historic leader on climate action. A coalition of liberal groups like the Sunrise Movement, the Sierra Club, and the Movement for Black Lives said the bill was “much-needed and wildly popular,” and that it included “transformational investments” in climate measures and essential services.

Instead, the bill will only be another testament to the unwillingness of Democrats to put the needs of the planet and the majority of its people before those of big business. The president’s plan has now been pared down by half, cut from $3.5 trillion over 10 years to $1.75 trillion over the same period. Of that, only $555 billion will go toward climate change mitigation over the next decade — not even one-10th the amount the U.S. is likely to put toward military funding during that time.

The news comes, of course, just as the Biden administration is making major giveaways to the world’s biggest polluters at COP26 and abandoning the goal of limiting warming to 1.5º Celsius. Combined with the latest cutbacks to Build Back Better, it is clear that Biden and the Democrats, in the words of Greta Thunberg, “have given up” on taking climate action.

Most conspicuously absent from the new version of the bill is the earlier plan to mandate that 80 percent of the electric grid be powered by renewable energy by 2030 and to impose penalties on energy firms who fail to meet targets. There are no longer any enforceable mechanisms within Build Back Better to bring about a transition to renewables. Without such mechanisms, energy companies have no incentive to move away from fossil fuel reliance and should be expected to continue with the status quo.

Gone too are many of the so-called social safety net expansions that had been included in the bill, including the plans for universal paid family leave, free tuition at community colleges, lowered prescription drug prices, and the inclusion of vision and dental coverage under Medicare. The much-hyped “billionaire tax,” which aimed to raise funding through modest tax increases for the country’s 700 richest individuals, also appears to have little life left. Even the modest increase on corporate taxes to 28 percent — still far from the 35 percent that existed before Trump’s tax cuts — are on the chopping block and will likely be scaled back.

With the passage of a separate $1 trillion infrastructure bill Friday night, the so-called progressive wing of the Democrats lost any leverage they once had. For months, House Democrats, led by the Squad, had refused to hold a vote on the infrastructure bill unless the more expansive version of Build Back Better was put to a vote at the same time, knowing the latter had a far more difficult path through Congress. In the end, the six members of the Squad were left alone in opposition to the bill; all their fellow Progressive Caucus members voted in favor of the bill, and Democrats lost their last bargaining chip in the negotiations with the center-right wing, led by Senators Joe Manchin and Kyrsten Sinema. After all the celebration — and handwringing — over the Democrats’ leftward swing, it has been the most conservative Democrats who’ve held veto power over the party’s direction since Biden’s election.

Too Little, Too Late

Even before Manchin and Sinema succeeded in slashing them, the reconciliation bill and infrastructure bill were insufficient to deal with the scope of the climate crisis. The marquee goal of Build Back Better was to achieve net-zero emissions by 2050. But as many environmental organizations have pointed out, net zero is a dangerous hoax promoted by the world’s biggest polluters to continue emitting carbon. As long as their emissions are “offset” by purchasing carbon credits or using carbon capture and storage technology, companies face no restrictions on fossil fuel usage.

Indeed, the reconciliation bill never imposed any limitations on further fossil fuel extraction or penalized the largest historical polluters. Neither was the funding sufficient to confront the scale of the climate emergency. To put the bills’ cost in perspective, the International Renewable Energy Agency has said $131 trillion is needed worldwide by 2050 to achieve 100 percent renewable energy. Biden’s plan wouldn’t even represent 1 percent of the yearly funding necessary to achieve a full transition to renewables.

The infrastructure bill, meanwhile, allocates billions to industries that are among the most polluting and carbon intensive, including the auto and airline industries. Around $110 billion is designated in the bill toward roads, bridges, and related projects, and another $25 billion will go toward upgrades to airports. Together, the auto and airline sectors account for about one-quarter of all greenhouse gas emissions in the United States. Far from curtailing emissions from these industries, the infrastructure bill will, in fact, incentivize further growth in both.

It was no coincidence that the bill received bipartisan support, including from former Trump allies like Mitch McConnell. It was heavily influenced by the lobbying of fossil fuel corporations like Exxon. It offers billions in potential new subsidies to oil and gas industries under the guise of climate solutions. According to the Center for International Environmental Law, fossil fuel companies will be eligible for at least $25 billion in new subsidies, in addition to the $15 billion that is already handed out annually. The funding will go toward technologies like carbon capture and fossil hydrogen, which are sold as a fix for the climate crisis but are in fact designed to prop up these industries for several decades to come.

In other words, despite its marketing as a plan to create “sustainability” and “clean energy,” the infrastructure bill is likely to maintain current levels of carbon emissions — or even increase them.

The findings by the IPCC — a historically conservative body — released last summer point to a dire scenario. The past five years have been the hottest since 1850. The carbon budget to keep warming at or under 1.5º Celsius will soon be depleted. Staying within this budget requires a massive scale-down of emissions over the next nine years. Scientists around the world have supported this assessment. Jean Su, director of the Center for Biological Diversity’s Energy Justice program, said that to keep warming under the 1.5 degree threshold, the U.S. must “cut domestic emissions by at least 70 percent by 2030.”

Despite the writing on the wall, the governments of the world’s richest countries, including the United States, have taken virtually no action to meaningfully reduce emissions. More than half of all greenhouse gas emissions since 1750 have occurred within just the last three decades. That period includes the presidencies of not only outright climate deniers like Bush II and Trump but also Clinton and Obama, supposed supporters of climate action.

Since the 2016 Paris Agreement, no major powers have made climate pledges in keeping with the 1.5 degree target set during the summit. While the IPCC recommends a reduction of at least 45 percent in global emissions by 2030, according to its latest findings, the Nationally Determined Contributions of all the 191 countries taken together would result in an increase in global emissions of about 16 percent in 2030 compared to 2010. This would put the world on track to a temperature rise of about 2.7 degrees by the end of the century, a prospect that would be catastrophic for hundreds of millions of people around the world

Biden, despite campaign promises, has failed to take meaningful steps to end fossil fuel production. It was the Biden administration that gave the green light to Minnesota’s Line 3, and the administration recently opened up nearly 750,000 acres of public lands to oil and gas leasing. And despite the temporary halt to new leasing ordered in January, more than 2,800 new drilling permits have been issued so far. According to the Western Environmental Law Center, that rate of 351 per month outpaces the Trump administration’s 300 permits per month in fiscal years 2018–20.

Biden and the Democrats have proved themselves unfit for the task at hand, refusing again to take the minimum steps necessary to prevent a climate catastrophe. But despite all the failings of the political class, there’s still hope for the planet. A major public works program, the nationalization of the entire energy sector, and the allocation of trillions toward a renewable energy transition would allow us to avoid the worst consequences of climate change.

Yet these efforts require prioritizing the needs of the planet and the majority of its people, not the interests of a tiny few. The two parties of big capital won’t be the ones to carry out the necessary measures. Fortunately, there is a class capable of leading the transition and ensuring a livable planet for all — the working class.