Biden is using the spectacle of COP26 to pretend that he’s committed to fighting climate change. Yet he’s spent the past six months supporting every attack on environmentalism that capital has required of him. 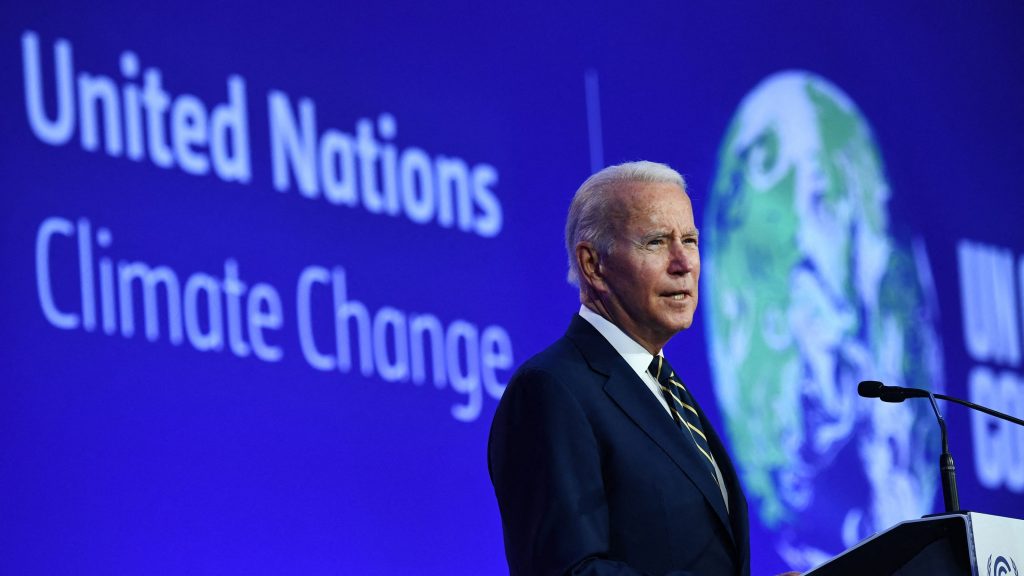 Environmental policy is in the news as bourgeois leaders from around the world gather in Glasgow for the COP26 climate conference, the biggest conference on climate change since the 2015 Paris Accords. Joe Biden has drawn headlines for using the conference to launch a methane reduction plan and shame Russia and China for not attending the conference.

These high-profile acts make sense for Biden, who wants to present his presidency as a break from that of Trump, who proudly denied climate science and did not care to present the United States as a world leader in responding to the climate crisis. Like Trump, however, Biden is the head of a capitalist empire that was built on fossil fuels and depends on overproduction and constant growth to maintain itself. The very nature of the presidency prevents a serious commitment to environmental sustainability, and this lack of commitment can be clearly seen in Biden’s record on climate so far.

Given the nature of the U.S. and world economies’ reliance on fossil fuels, Biden was quick to throw his support behind increased fossil fuel extraction. Back in August, National Security Advisor Jake Sullivan released a statement encouraging the Organization of the Petroleum Exporting Countries (OPEC) to increase crude oil production. Using the excuse of Covid-19 and the need for global economic recovery, the Biden administration endorsed the industry most responsible for carbon emissions and the wide-scale destruction of land and sea via oil spills like the recent one off the southern coast of California.

Essentially, Biden claims to care about reducing methane emissions while the world is focused on what he has to say about climate policy. But when increased oil production is an easy way to get capitalists’ profits flowing, Biden has no problem with drilling and all the cost to life and the environment that come with it.

In one of the biggest carryovers of the Trump administration’s climate policy, Biden is continuing with a fossil fuel lease sale that would open 78 million acres of the Gulf of Mexico to offshore drilling. In fact, the administration has used the recent Intergovernmental Panel on Climate Change (IPCC) report to justify the sale, claiming that the report “does not present sufficient cause” to oppose such a large sale of land to fossil fuel companies. Biden has also been outdoing the Trump administration’s approval of permits for drilling on federal land.

Biden is also greatly expanding the Pentagon budget, with a particularly concerning emphasis on building up the military’s nuclear capabilities. The budget proposed for 2022 requests $27.7 billion for “nuclear modernization,” and even if this is never used in explicit warfare, it is well documented that the testing of nuclear weapons comes with long-term environmental consequences.

Moreover, the U.S. military is the biggest institutional polluter, waging violence against Indigenous communities around the world that are on the front lines of the fight against fossil fuels. Just last week, the Department of Defense released a document analyzing the risk of climate change on its ability to conduct operations. While the bourgeois press spun this report as a sign that the military is serious about fighting climate change, what the report actually focuses on is how training and spending priorities will need to be altered so that the military can better predict regional conflicts and wage war against economic competitors like Russia and China.

While much of the independent press has done a good job at highlighting Biden’s fueling of the climate crisis by indulging the fossil fuel industry, it is important to highlight just as much how Biden is directly fueling the climate crisis specifically as the head of a global empire with an ever-increasing military budget.

This emphasis on further militarization in the context of the climate crisis is even more concerning when we look at how the state responds to climate activists. For months, Native water protectors led a fight in Minnesota against the Line 3 pipeline by multinational oil company Enbridge. This movement did not win. Enbridge finished building the pipeline at the end of September. Throughout the protests, militarized police responded with violence and mass arrests on the water protectors. In many ways, this dynamic is a repeat of the protests against the Dakota Access Pipeline, which occurred when Biden was vice president. These struggles show over and over that whether Republicans or Democrats are in charge, the state will protect capital and respond violently to those who attempt to protect the environment.

Yet the state’s priorities with Biden at its head are not just limited to the police. Last week the courts gave a major victory to oil giant Chevron. This victory was the sentencing of environmental lawyer Steven Donziger to six months in prison in a sham trial led by a private prosecutor with direct connections to Chevron.

Biden and his attorney general, Merrick Garland, had the power to end the case and pardon Donziger. In fact, high-profile celebrities like Roger Waters and Susan Sarandon and even some members of the left wing of the Democratic Party had called on Biden and Garland to step in and pardon Donziger. The United Nations also determined that Donziger’s house arrest was a violation of international law. Despite the massive public support for Donziger, Biden sided with Chevron by remaining silent.

This is Biden’s commitment to the climate crisis. It is a commitment to further fuel the crisis by siding at every opportunity with the sectors of capital that support fossil fuels as they continue to wage war against the U.S. working class, Indigenous communities, and people of the Global South who are suffering the worst consequences of the crisis.

Biden, however, is not unique. He may be the most hypocritical as he tries to depict the United States as the world leader in fighting the climate crisis and other countries as failing to step up. But all the world leaders attending the conference are leaders of capital. Bourgeois world leaders will never seriously address the threat of climate change because to do that, they would have to fight the very logic of capitalism, the system that they exist to maintain.

Only an international movement led by the youth, the working class, and Indigenous communities around the world can address the climate crisis. This will require support for immediate reforms, but it must also be understood that reforms are not enough. The very threat of climate change is a direct consequence of capitalism. Each day the system continues, the less effectively reforms buy time for humanity’s survival. The environmental movement must fight for revolutionary socialism if humanity is to survive environmental catastrophe.