Biden Is, and Always Has Been, a Champion of Zionism and Imperialism

The Israeli state’s aggression and impunity would not be possible without long-standing, bipartisan U.S. support, including that of President Biden. 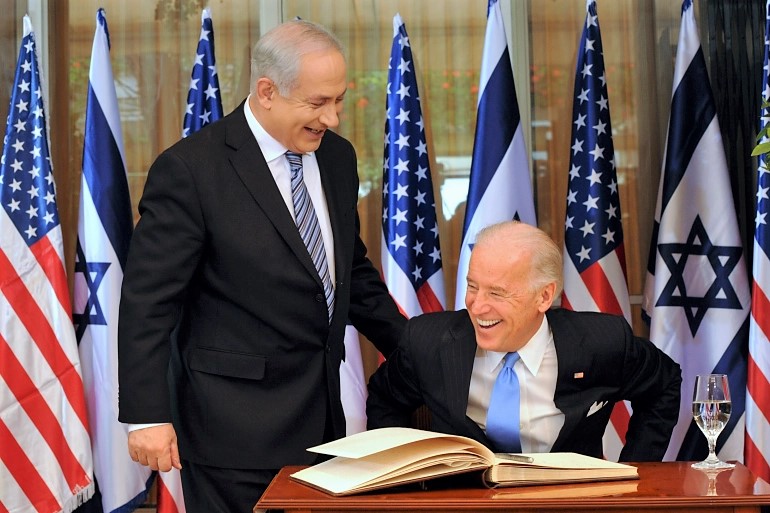 Israeli aggression against occupied Palestine has once again boiled over into open conflict this past week. What started as Israeli police repressing demonstrators who were protesting the forced expulsion of several families in East Jerusalem has escalated to full-scale bombings in Gaza and the violent storming of Al-Aqsa Mosque, the third holiest site in Islam. This is in addition to both the deadly vaccine imperialism that Israel has been practicing against Palestine and the constant occupation and subjugation of the Palestinian people and their land. In the current crisis, at least 53 Palestinians have died, including 14 children, and over 300 have been injured. Amid this uncertainty, one thing is for sure: the bipartisan U.S. policy of ironclad support for Israeli aggression will continue unabated, led by Israel’s ally, President Joe Biden.

This latest aggression was triggered by protests in the East Jerusalem neighborhood of Sheikh Jarrah where six Palestinian families are facing imminent eviction to make room for Israeli settlers after years of legal proceedings. With Israeli police protection, these settlers have been brazenly terrorizing the Palestinian residents, who have lived in their homes since 1957. Protesters in East Jerusalem organized demonstrations and sit-ins in support of the families only to be met by brutal repression from Israeli forces who fired tear gas and rubber-coated bullets.

The repression escalated substantially last week, on the last Friday of Ramadan, when Israeli police violently repressed Palestinian worshippers at the Al-Aqsa Mosque. The worshippers and protesters valiantly faced off against the police to defend themselves against the repression. In the end, over 200 Palestinians were injured, sparking more protests in East Jerusalem and beyond. Residential buildings have been destroyed by bombs which were purchased directly with U.S. funds.

The current violence is far from an aberration: Israel is built on a policy of violent occupation, displacement, and dispossession of Palestinians. And it is no exaggeration to say that the Israeli state’s aggression and impunity would not be possible without long-standing, bipartisan U.S. support, including from President Biden.

Cumulatively, Israel has received over $100 billion from U.S. administrations since 1962, more military aid than any other country in the world has received from the United States. Israel currently receives $3.8 billion in military funding annually as part of a ten-year deal brokered by the Obama administration, with Biden playing a leading role in negotiations. The Israeli government can also count on the United States’ backing in the international arena: the U.S. has used its veto power at the UN Security Council at least 43 times on Israel-related resolutions since 1970. U.S. support and funding thus touches nearly all aspects of Israeli aggression, and the blood of dead Palestinians is on the United States’ hands.

Biden has been a pillar of U.S. support of the Zionist Israeli state. He has called U.S. backing for Israel “unshakable,” claims that “the United States will constantly and forever have Israel’s back,” and touts an extensive record of support for the Zionist State since the 1970s. In 2006, Biden acted as an international observer of the Gaza elections and denounced the results after Hamas won a resounding victory, saying that Palestine could not be trusted to hold fair elections; he subsequently signed onto a bill that called on the Bush administration to prohibit all international aid — not just from the United States — to the Palestinian Authority.

When Israel began its all-out bombing onslaught against Palestine and Lebanon later that year, Biden was an ardent champion of the military offensive, likening it to the U.S. invasion and occupation of Afghanistan. This support persisted when he was vice president during the major bloody Israeli attacks on Gaza in 2009, 2012, and 2014. In the infamous 2014 Operation Protective Edge, which caused the deaths of over 2,000 Palestinians, including more than 500 children, Biden and the Obama administration defended Israel’s actions.

The first months of his administration have predictably highlighted that Biden represents more of the same brutal policies of murder and dispossession for Palestinians. While he has departed from his Republican predecessor on a few issues related to Palestine, these departures are largely symbolic. Whereas Trump, a staunch ally of Prime Minister Netanyahu, cut hundreds of millions of dollars in funding from the UN Relief and Works Agency for Palestine Refugees and closed the office of the Palestine Liberation Organization in Washington, D.C., Biden has pledged to restore the aid and reopen the office. The Biden administration also reversed Trump’s 2018 withdrawal from the UN Human Rights Council, at the time a response to “chronic bias against Israel,” according to UN Ambassador Nikki Haley.

While they may come in response to changing public opinion from a growing sector of the Democratic Party’s base which is critical of the United States’ relationship to Israel and its violent occupation of Palestine, none of these actions mark a shift in U.S. support for the murderous state of Israel. They are an attempt to speak to sectors of the Democratic Party who are increasingly questioning Zionism and the United States’ support of Israel without making any real change. In fact, the U.S. is reportedly blocking the release of a UN Security Council statement calling for a ceasefire, and in a conversation with Prime Minister Netanyahu yesterday, Biden reaffirmed Israel’s “right to defend itself.”

Biden has continued several of Trump’s policies on Israel, and remains committed to maintaining the oppressive status quo. His administration has pledged to keep the U.S. embassy to Israel in Jerusalem, and expressed “concerns” over the International Criminal Court’s attempts to investigate Israeli war crimes in occupied Palestine. And despite increasing calls for conditions to be imposed on U.S. aid to Israel, Biden maintains $3.8 billion in annual military funding — the military funding currently being used to murder Palestinian children and destroy Palestinian neighborhoods. In fact, Biden may even help shore up bipartisan support for Israel by, in the words of former Anti-Defamation League president Abe Foxman, “mak[ing] sure Israel will not be politicized.” In other words, by distancing the issue from Trump and giving the appearance of sympathy for the humanitarian crisis in Palestine, Biden may be creating bipartisan stability to maintain the United States’ Zionist policies despite increasing resistance among Americans.

Biden’s own comments as vice president are instructive as to why the United States continues to actively aid and abet Israeli aggression and the oppression of Palestinians. At an event in 2013, Biden went as far as to say that, “If there were not an Israel, [the United States] would have to invent one to make sure our interests were preserved.”

Democrats and Republicans alike have championed the violent alliance between the United States and Israel because they have an interest in maintaining the latter as an imperialist enclave. U.S. administrations, including the current Biden administration, need a heavily armed, imperialist client state in order to maintain U.S. interests and hegemony in the region. Whether the current administration is red or blue, this fact will not change. There is no “lesser evil” for Palestine.

The lukewarm opposition of progressive Democrats like Bernie Sanders and the “Squad” to Israel’s crimes while essentially voting for the policies of the Democratic and Republican establishment is a slap in the face to the anti-Zionist folks who campaigned for Sanders. Both Sanders and Alexandria Ocasio-Cortez have voted in favor of funding for the Israeli state.

Joe Biden, and the Democratic Party he represents are imperialists. It’s clear in its interventions on behalf of Israel in Palestine and in its aid to the military of Colombia which is murdering protesters in the streets. They represent and govern the most powerful imperialist state in the world which cannot be “pushed to the left” in any substantive way on foreign policy matters. And that means continued U.S. aid to the murderous state of Israel, all the while the U.S. claims there is just no funding for healthcare or to produce vaccines for the world.

But all over the world, people are standing up in support of Palestine and organizing Free Palestine protests in solidarity with their struggle. In the U.S. dozens of cities held protests, signaling a shift: a new generation of anti-Zionists are standing up and taking the streets. And in Palestine, the heroic resistance of the Palestinian people continues, with their hands empty or at most armed with rocks, Palestinians are resisting the Zionist invasion and Israeli repression.

Imperialism is a bipartisan affair, and for Palestinians who are suffering under the boot of Israeli oppression, there is no lesser evil in the Biden administration. This is why we cannot support the imperialist Democratic party. We must be anti-imperialists, and demand the immediate end of all military aid to Israel and a free Palestine.