While the president of the United States assures the public that the U.S. has “fought for freedom, expanded liberty, defeated totalitarianism and terror,” the reality is completely different. 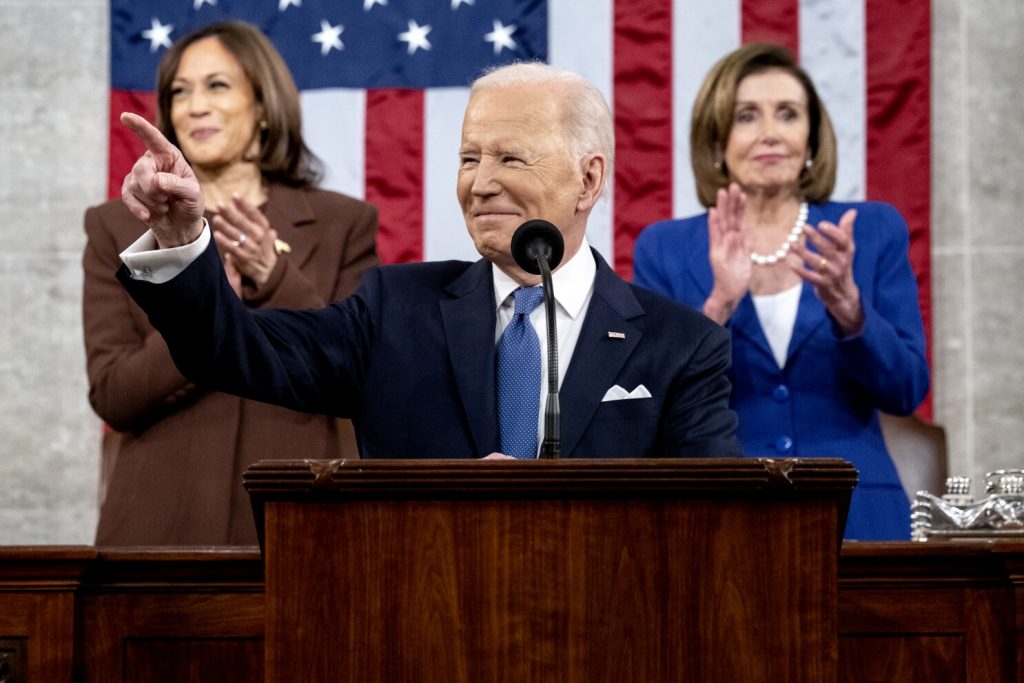 Amid the Russian invasion of Ukraine, an economic crisis, and a low approval rating, Biden gave his State of the Union address, focusing on capitalism, nationalism, and copaganda, using anti-Russian rhetoric and glorifying the pro-imperialist president of Ukraine.

It is important to be clear that the Russian army’s invasion of Ukraine is a reactionary one, which has as its background the geopolitical dispute between Russia and NATO. It is also about “Great Russian” nationalist ambitions over what Putin considers a historical appendage of Russia, denying even its right to exist as an independent nation.

For its part, the United States and the European imperialist powers that control NATO aim to encircle Russia to limit its influence in the region, curb Putin’s ambitions to grow Russia’s geopolitical power, and weaken the unity between Russia and China.

The U.S. and the other imperialist nations involved with NATO are not interested in defending “democracy” in Ukraine. They are using the Russian military invasion for their own interests, including their own purposes of military rearmament, as we can already see with the increase in budget of the German army.

Biden opened his State of the Union speech by saying that Americans have “a duty to one another, to the American people, to the Constitution. And with an unwavering resolve that freedom will always triumph over tyranny.” Let’s unpack these phrases.

Appealing to a document written by slave owners more than 200 years ago is not the best way to open a discussion about freedom. As we wrote in a previous article,

The reactionary institutions enshrined in this document, from the presidency to the Senate, were designed to keep power concentrated in the hands of the ruling-class minority, excluding the vast majority from society’s most important decisions. In this same vein, we also denounce the Supreme Court as one the most powerful pillars of the ruling class in the United States. It is despicable that nine unelected judges who serve for life can take away our hard-won rights, and we must fight this with the combined power of the working class and oppressed.

“Democracy” is not just democracy — it is bourgeois democracy. But not even the most basic democratic rights are guaranteed in the United States. As we have written previously, the Electoral College “effectively neutralizes the popular vote, leaving the decisions of the highest offices of the U.S. government to unelected officials and silencing millions of votes.” The bipartisan U.S. regime has been guaranteeing many undemocratic mechanisms in a constant effort to undermine voting rights that affects primarily people of color.

In the United States, if you are a Black person, you can get a six-year prison sentence because of voting while having a felony conviction, meanwhile the police officer who killed Daunte Wright only gets two years.

When they speak about democracy, they are referring to bourgeois democracy. While they expect sectors of the population to participate by voting every two or four years, it is big capital that makes decisions over our lives every day. We don’t vote on wages, on food, on housing, or any other important issues that affect our lives; capitalists do. As we already saw during this pandemic, they didn’t hesitate to send millions of people back to work, risking their lives. When it comes to war and pitting working-class people from different countries against each other for capitalist interest, there is no democratic space for the masses to have a say about it.

The notion that the U.S. defends “democracy” is nothing more than hypocrisy.

U.S. and Democracy around the World

While Biden and U.S. politicians talk about “peace” and “democracy,” they continue to send billions in military aid the Zionist state of Israel, an ally of imperialism, a racist enclave, based on colonization and national oppression of the Palestinian people. Last year, hundreds of thousands around the world mobilized in solidarity with Palestine and against the Israeli military attacks that destroyed hospitals, houses, schools, and a building where Al Jazeera media operated, and that took the lives of more than 200 Palestinians, more than 60 of whom were kids. Despite the massive outcry, we didn’t see U.S. government sanctions, media censorship, athletes banned, or any other actions. In fact, a lot of activists and protesters were condemned. This shows a double standard toward war, invasion, and military intervention.

They U.S. continues to sell weapons to the Saudi monarchy, which continues to bomb Yemen while it is suffering one of the worst humanitarian crises because of the war. The United States, often through NATO, has been responsible for multiple military and occupations across the globe like Afghanistan, Iraq, Libya, Syria, and others. And it is also responsible for economic sanctions and blockades that affect the populations in countries like Venezuela, Cuba, Iran, and now Russia, among others.

The U.S. has been a threat to other countries across history and the globe, whether in the form of military intervention or backing or directly organizing military coups to destabilize governments or revolutionary movements. Nowadays, according to a study by David Vine, the U.S. controls about 750 military bases in at least 80 countries across the planet. And according to the SIPRI Military Expenditure Database, the U.S. is responsible for 39 percent of global military spending, more than the 10 countries that follow it on the list. President Biden has been supporting this military expansion since he was a senator in 1973, and in December of last year, in the midst of a pandemic and an economic crisis, he approved an increase of $777.7 billion for the U.S. annual military budget. U.S. imperialism is the biggest threat in the world.

The U.S. and NATO are not fighting for “independence and democracy” in Ukraine. As we have pointed out in our international declaration, “The fight for an independent workers’ and socialist Ukraine implies defending the Ukrainian people’s right to self-determination while emphasizing that real independence will be won neither by “pro-Western” Ukrainian nationalists nor by “pro-Russian” supporters — but only by a workers’ government.”

Especially in imperialist countries, it is important to unveil the real intentions that are hidden behind the so-called defense of democracy and push for a movement in the streets that fights against the war in Ukraine, for Russian troops to get out of Ukraine, and against the imperialist role of the U.S. and NATO.