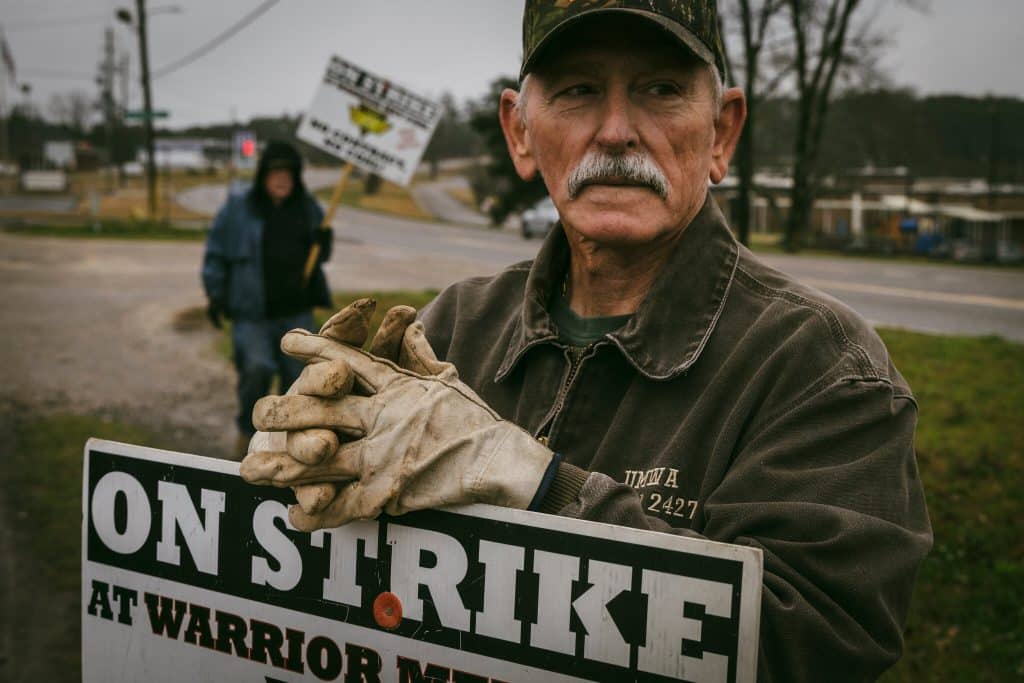 On August 3, the United Mine Workers of America (UMWA) and the Associated Press reported that the subunit of the National Labor Relations Board (NLRB) for Region 10 (much of the South) has ordered the union to pay $13.3 million to Warrior Met Coal.

About 1,000 workers from two mines and two aboveground  facilities southwest of Birmingham, Alabama, have been on strike against Warrior Met since April 2021, resisting brutal working conditions. Now the Biden NLRB is demanding the UMWA pay what amounts to $13,000 per striker into the company’s pocket. The government says this is reimbursement for security guards, security cameras, repairs, and production lost because of the strike, plus buses for carrying scabs across picket lines.

This workforce routinely does six-day weeks and 12-hour days. The company operates on Sundays and almost all holidays. A hated company policy fires workers automatically if they miss four days of work in a year, even because of health problems or family emergencies.

Early in the strike, the company offered a raise of $1.50 an hour for 2021 to 2026. Workers retorted that back in 2016 they accepted a $6-an-hour reduction when the company declared bankruptcy and threatened mass layoffs if the workers didn’t “help” shore up its profitability. More than 95 percent of the strikers voted no when the UMWA leadership put up this company offer as a tentative agreement.

The $13.3 million NLRB judgment is more than half of the strike pay distributed to 1,000 strikers in 16 months. The UMWA provides only $350 a week, or $18,000 a year, for miners’ families to live on. The money grab goes to a company that made $146 million in profit for January to March this year and last year paid its CEO $5.7 million.

UMWA president Cecil Roberts denounced the NLRB judgment. “What is the purpose of a strike if not to impact the operations of the employer, including production? … This is outrageous and effectively negates workers’ right to strike.” He accused the NLRB of “tak[ing] up the company’s cause.”

But the UMWA leadership also announced that it agreed to a settlement deal after Warrior Met made its arguments before NLRB district administrators. Union leaders agreed to pay some monetary damages to the company, which accused picketing strikers of rowdy, illegal actions against scabs and which asked the NLRB to punish the union. The union statement says it was necessary to pay the company damages “in order to save striking members … from days of hostile questioning by company lawyers,” but that the NLRB then shocked union leaders by massively increasing the payment. It is self-evident that the union bureaucracy opened the door to this disastrous situation and that it did so largely relying on the NLRB’s goodwill. The line about sparing coal miners from hostile questions is a phony excuse.

Questioning whether the NLRB is at its core pro-worker, neutral, or pro-employer — and why — cannot be sidestepped. Many unionists believe that the NLRB is taking or will take progressive, pro-labor actions. In fact, the NLRB intervened as a referee to require a revote on unionization at Bessemer, Alabama Amazon (which failed again). It has started pressing cases against Starbucks for some union busting firings.

Paul Prescod has written in Jacobin, “Labor law, especially in the United States, is extremely limited in its scope and power of enforcement,” but still, “the new NLRB under Biden is a welcome change in the balance of power between workers and employers.” Union lawyer Gay Semel wrote in Jacobin, “The current union organizing wave is being held back by an underfunded NLRB.” Both authors are excited about Biden’s removal of some overtly anti-labor right-wingers from NLRB leadership positions and about the appointment of Jennifer Abruzzo, briefly a union lawyer, as head NLRB attorney.

The NLRB’s Warrior Met monetary order suggests a problem with these hypotheses. The NLRB does not exist to help workers win against our bosses. It is set up to be a referee. But it is not a neutral referee between two equal teams as in some symmetrical soccer game.

In particular, the NLRB mediates strikes and economic conflicts. It is a part of the U.S. government, which accepts that workers, if we follow its rules and get approval, have the right to organize and withhold labor in limited economic bargaining units. But it opposes muscular picketing and solidarity strikes. The NLRB does not hold that a striking workforce has the right to prevent production in their workplace. The NLRB upholds the opposite: that a company has the right at all times to access and use its property and that bringing scabs across picket lines is an essential legal principle.

This is not a hair-splitting argument. This is why Biden’s NLRB is imposing a $13.3 million fine on a union in favor of a coal company, basically kicking a group of workers while they are down, after fighting to win a strike for 16 months. The basic issue of “which side are you on” is why the Biden NLRB has no moral qualms about supporting the company with the six-day workweek and the CEO who gets paid almost $6 million annually. Further, it has no qualms about attacking Alabama coal miners who decided to fight back against mistreatment and overwork on the job they do 2,000 feet underground.