Joe Biden says he is pardoning people the federal government convicted for marijuana use. But his action will not release any prisoners, and is meant to obscure the fact that his massive funding for police expansion is a counteroffensive against the 2020 Black Lives Matter uprising. 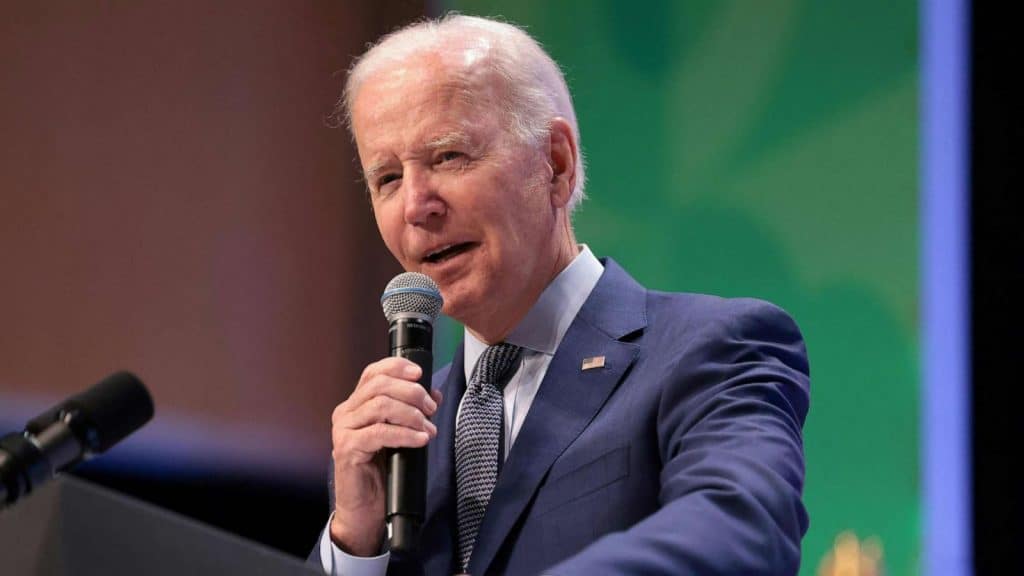 The Biden administration presents this as a response to the obvious excesses and cruelties of the United States’ half-century War on Drugs and a serious step in reforming discriminatory treatment of Black and Latinx people by the police and the courts. But a White House spokesperson immediately admitted, “There are no individuals currently in federal prison solely for simple possession of marijuana.” Biden is not actually releasing a single prisoner even though the United States currently holds 1.9 million people behind bars. This is the highest rate of incarceration in the world. The U.S. holds 639 prisoners per 100,000 population, double the rate of 330 per 100,000 in Russia.

Biden is expunging the criminal records of only 6,500 people convicted for weed possession by federal courts over the past 30 years, and perhaps a few thousand people convicted by DC courts. His reform is merely to remove a form of legal job and benefits discrimination from perhaps 10,000 people previously jailed and released over a product that half of the U.S population (and at least two presidents) have consumed and perhaps three in 10 American young adults use regularly.

Biden announced this pardon of no one 33 days before the congressional election as an open bid for votes. The New York Times wrote that the “announcement could give Democrats a boost in the upcoming midterm elections, especially among young people, liberals and minority communities.”

NAACP president Derrick Johnson immediately tweeted, “We applaud President Biden. Correcting unequal treatment — including marijuana reform — has been a priority issue for the NAACP for decades.” This is dishonest. Biden has expanded the police and prison industrial complex throughout his five decades as a national politician. He is one of the authors of racist mass incarceration, and a pardon that frees zero prisoners doesn’t change that. This statement from the NAACP shows how NGOs can work overtime to shore up and repair falling public faith in ruling-class institutions. It’s as if they are saying, “Hey, the Democratic Party really does understand regular people’s problems. Trust us.”

Biden is (after 50 years of being a Drug War leader) now announcing that there is a small group of people arrested and jailed who were treated unfairly. But a ruling-class politician (specifically a man whose son was, by his own account, addicted to crack and was permitted the benefit of going to rehab, not jail, 15 times) acts as the arbiter of who is a deserving and who is an undeserving convict.

Just as the ruling class have insisted there is nothing fundamentally wrong with the police, we are seeing a minimal and pretentious drug pardon that doesn’t speak to several burning questions: the invention of victimless crimes, the criminalization of mental health and social crises, and the fact that police are sent to patrol and shake down working-class Black and Brown communities while upper-class people have always been able to indulge in cocaine, prostitution, and other vices secure in the knowledge that the system is uninterested in their activities.

This marijuana reform mirrors the cosmetic prison reform Biden announced on taking office. In January 2021 he declared he would phase out use of private, corporate-run prisons by the federal prison system. Biden called this a step toward “ending institutional racism” while hoping people wouldn’t focus on the fact that private prisons held only 9 percent of federal prisoners, and federal prisons held only 11 percent of the U.S. prison population, so that he was speaking about only 1 percent or so of prisoners. The Biden administration continues to use private prison companies to operate most of the jails in which ICE holds immigrants awaiting deportation, regularly employing unpaid forced labor.

The pot policy also mirrors Biden’s August surprise announcement of $10,000 to $20,000 student debt reduction, in doing the absolute minimum to address a huge problem, right before the coming election.

Along with the “pardon,” Biden is ordering his Departments of Health and Human Services and Justice (specifically the DEA drug police) to begin a bureaucratic review to consider shifting marijuana from Schedule 1, the worst category of drugs under the 1971 federal Controlled Substances Act, down to Schedule 2. This would not legalize or decriminalize marijuana federally, but it might pave the way for less severe federal action over the drug. Many people point out that the Schedule 1 list includes heroin. The Washington Post quotes the director of reform NGO Coalition for Cannabis Policy, Education and Regulation, suggesting it may take the administration up to two years to actually take this tiny step, which could be accomplished in a minute and is far short of legalization. Sixty-eight percent of the U.S. population supports actually legalizing marijuana.

In fact, 19 states and DC have already legalized recreational weed use over the last decade. Biden acknowledged that while similar proportions of white and Black people use marijuana, police have for years arrested Black people for possession of the drug at nearly four times the rate for whites. We have to question: If it’s legal to sell people weed in 19 states, and 68 percent of the public thinks the drug should be freely available, why is anyone in state or federal prison anywhere for selling cannabis to consenting adults? Biden is not pardoning anyone convicted for selling pot. Furthermore, isn’t it a bit convenient and hypocritical to admit that there is rampant racism in arrests for possession but to intentionally ignore the same phenomenon in policing of alleged drug dealers? And does admitting police focus on Black people while carrying out pot possession arrests (which totaled around 700,000 per year in 2000–10) imply that police can be trusted to make other categories of arrests in a nonracist fashion?

In August Biden publicly trumpeted a plan for $37 billion in new federal funding for police departments. One-third of that money is to be used to hire 100,000 new cops. The administration calls this bill the Safer America Plan.

Just as Biden pushed the punitive and racist 1994 “crime bill,” he fully supported criminalization of marijuana users from 1974 to 2019. Today, he is opportunistically using an expungement for a small number of Drug War victims he himself targeted, to score political points — without actually reversing the harm of the laws and actions he has supported and while continuing to expand police forces.

A White House spokesperson promised that Biden is “urging all governors” to now pardon the many tens of thousands of people jailed for weed by states, but there is no evidence this is anything more than empty words. Biden has placed no political pressure on Democratic governors to do this. Additional cops are hired by sending $13 billion in specific federal money to local governments, but this plan for restorative justice on pot possession is based on verbal suggestion.

The marijuana pardon is not the only way Biden is trying to put his “Safer America” police expansion into more attractive wrapping paper. After a year and a half of inaction on the murder of Breonna Taylor by Louisville police, the most infamous unaddressed racist crime by police in public consciousness, the Biden DOJ obtained federal indictments against one of the three cops who shot at Taylor and two others who lied in the search warrant process. Those indictments were announced two weeks after Biden’s first Safer America Plan press release boasted that he had both “funded the police and improved police accountability.” The Biden administration continues to refuse to bring charges against cops in many other well-known murder cases.

The Democrats give us mass police hiring and continue mass incarceration. Before elections, they make pretenses of liberalism that are hypocritically accepted by the capitalist media from the New York Times down, and opportunistically used by Democratic NGOs.

There is no reason to support either U.S. capitalist party. Marx and Engels were right when they insisted that in the absence of an oppositional working-class party, especially in a strong imperialist country, working people are put into a mental, cultural, and political straitjacket. We are hegemonically dragged around by our rulers.

All drug use should be decriminalized. Addiction and self-harm should be treated as physical, mental, and social health problems, with a high-quality, single, free, public healthcare system. The act of simply selling unadulterated drugs to willing adult buyers should not in itself be treated as a crime. Drug use can be reshaped, but it cannot be halted. For this reason, we should have compassionate, controlled use places allowing users of hard drugs to consume them with pharmacists ensuring there will be no spiked fentanyl killing people and nurses preventing overdoses. There should also be government support for self-help and recovery like 12 step programs. All this would help people a million times more than the Drug War ever has.

Our rulers are hypocrites. And they pose for votes. We need socialism so that all people can take charge of their own safety and health. And so that a 50-year personal career of privilege and nonsense like Biden’s will stop being the normal mode of governing people’s lives, and, indeed, become impossible. Freedom for everyone who is unjustly imprisoned. Prison or real jobs as appropriate for bourgeois politicians.