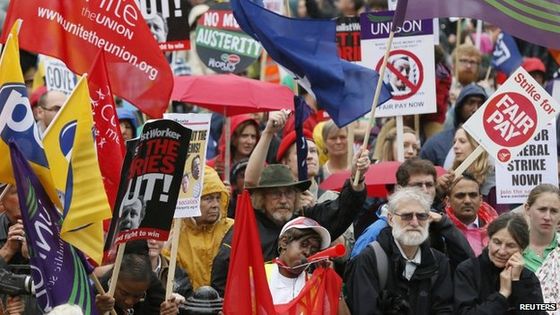 The bill was presented by Business secretary Sajid Javid and aims to criminalise ‘unlawful picketing’, and make it harder for workers to strike ‘legally’ and for the Labour Party to get union funding. The legislation is also expected to restrict and police union members’ rights to organise pickets.

The business secretary proposal includes changing current rules under which all that is needed for a strike is a simple majority of those that take part in a ballot. But the new legislation will enforce a minimum 50% turnout; in addition, public sector strikes would need the backing of at least 40% of those eligible to vote.

To put an example, the new plans require that in the case of 100 teachers asked to strike, the industrial action would only be lawful if at least 50 teachers voted and 40 of them backed the strike. This double threshold would have to be met in any strike called in health, education, fire, transport, border security and energy sectors – including the Border Force and nuclear decommissioning.

The proposal would impose unions to give employers 14 days notice of strike action and will allow them to break strikes by hiring strike-breaking agency staff. If passed, it will set a four-month limit between a vote and industrial actions and put restrictions on picket lines to ensure non-striking workers can continue to work “without fear of intimidation”. The new law will give new protections to those workers unwilling to strike. But the measure it is also aimed at stopping unions to demonstrate outside the homes of senior managers, as occurred in a dispute in Grangemouth Refinery, a crude oil refinery in Scotland.

Under the new legislation unions will be asked to set out detail plans to the police indicating how they will use social media – including Facebook, Twitter, websites and blogs –to coordinate and organise strike action. The Javid plans allow the government to set a limit on the proportion of working time any public sector worker can spend on trade union duties.

The controversial bill will also ask unions to follow a model used in Northern Ireland that requires union members to contract into paying the political duties, rather than opting out. This reform led to a halving of union funding.

Labour politicians and trade union representatives have reacted with fury to these draconian proposals. Responses from trade union leaders include Mick Whelan, general secretary of Aslef, the train drivers’ union. He said that the new bill “smacks of Germany in the 1930s” and accused the government of attempting to “neuter the unions”. Len McCluskey, general secretary of Unite – the UK’s biggest trade union – said: “Unite is not going to see itself rendered toothless by passively submitting to unjust laws. If the Tories wish to put trade unionism beyond the law, then they must take the consequences.” TUC leader, Frances O’Grady said the bill would “make it almost impossible for workers to exercise what is their democratic right and civil liberty”.

Each of the four MPs engaged in the contest for the leadership of the Labour Party have condemned the new proposal. Veteran Jeremy Corbyn said the bill is a “naked attack on all working people” and he would repeal it if he led a Labour government.

Needless to say, the proposals are being welcomed by employers’ organisations. The CBI (Confederation of British Industry), described by the Financial Times as “Britain’s biggest business lobby group”, backed the introduction of strike ballot thresholds. On the same lines, Adam Marshall, policy and external affairs executive director at the British Chambers of Commerce, said the right to strike “must be exercise with the greatest restrain”.

It is not difficult to argue that the changes on the new legislation are politically motivated. When Margaret Thatcher introduced her anti-union laws it was against the backdrop of a wave of industrial discontent. Today, the power of the union has weakened and strikes are at historically low levels. According to official figures 2011 saw large protests over public sector pensions with 1.4m working days lost through labour disputes, and in 2014, 788,000 working days were lost in the UK due to industrial actions.

The bill is at its first reading stage – its official introduction to Parliament – and it was not debated. The Tories will bring the Trade Union Bill to parliament in the autumn. Its implications on trade unions’ rights are greater than expected. It represents an all-out assault on trade unionism in Britain and – if it is passed – would make it almost impossible to take meaningful strike action.

This is an attack on workers’ rights. It represents an attack on the right to join a union and to exercise the right to strike. It is not a coincidence that the Conservative government is proposing these vicious anti-unions laws after announcing its new £12 billion cuts package. The anti-austerity demo on June 20 and the strikes on London Underground and First Great Western by railworkers’ unions last week were a tremendous demonstration of the power of the organised working class. We must organise in our workplaces to fight the new laws and prepare a united fightback against the brutal cuts to our services.