Sherease Torain and Queen Afua have been forced to fight to keep their home after a case of deed theft. Gentrification is violence. 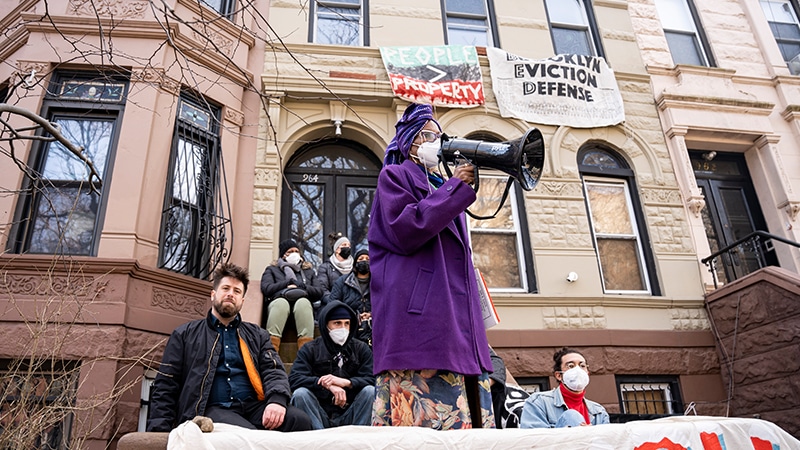 Brooklyn Eviction Defense and Crown Heights Tenant Union held a rally at 964 Park Place in Crown Heights, Brooklyn, on February 16 to protest an attempted eviction by deed theft. The home has been an important Brooklyn institution for 70+ years. The family was the first Black family on their block. Neighbors, activists, and members of B.E.D., C.H.T.U. and other organizations who are protecting the home have faced violence from police, marshalls, and employees of the false landlord. Below we republish a statement from the B.E.D. and C.H.T.U.

Sherease Torain and her mother Queen Afua, whose family has lived at 964 Park Place since 1951, are fighting off a violent attempted eviction. In 2015, Menachem Gurevitch and his parasitic firm, NETZ CAPITAL, committed forgery in order to steal the deed to Sherease’s home. This is nothing new. These crimes are the reality of gentrification: Crown Heights has seen 19,000 Black families displaced in the last decade; deed theft is instrumental in this dispossession. NETZ CAPITAL regularly commits deed fraud—stealing homes from families—across Brooklyn and in Atlanta, Connecticut, and Florida. This “business practice” of swindling homeowners of color has helped the firm accumulate a gluttonous operating worth of $350 million.

Menachem Gurevitch committed deed fraud in order to take advantage of a black family. Ever since, Menachem Gurevitch and Netz Capital have been strategizing to boot out Sherease and her mother so that they can sell the beautiful family brownstone. (Nearby homes go for $3 – 5 million.) On Monday, Eric Adams’s Commissioner of Community Affairs offered to pay to have Sherease’s family six months for a hotel stay.

Last week, Sherease was illegally locked out of her house, while she was in surgery. Her community got her back in and ever since have been defending her against physical and verbal attacks by the landlord’s henchmen. The police have stood by and watched as the landlord’s henchmen attack both the Torain-Robinson household and surrounding homes, terrorizing not just one black family but an entire community.

Sherease’s family was the first Black family on the block in 1951. Queen Afua and Sherease were both born in this house. Queen Afua is an institution, both in the neighborhood and in the borough of Brooklyn. 10 years ago, the Borough of Brooklyn celebrated her with a day dedicated to her storied healing career. Robbing a long-time Black Brooklyn family of their hard-earned generational wealth is anti-black violence.

Sherease has proof that Menachem Gurevitch committed deed forgery in order to swindle her family out of their home! Attorney General Tish James can help right this wrong.

• Sell the deed for the historic home back to the family for $1.

• Void the counterfeit deed from the thieves at Netz Capital.

What Are We Doing to Physically Protect Sherease?

Sherease has collaborated with organizers from Brooklyn Eviction Defense and the Crown Heights Tenant Union to hold a weeklong stoopwatch. Members of the community have sat out on Sherease’s stoop in frigid temperatures to make sure that the family is safe. Our stoopwatch has been attacked by members (sometimes dozens!) of the landlord’s team multiple times. On 14 Feb 2022, Menachem Gurevitch told AG Leititia James, in front of two of our community members, that he would “bring 150 yeshiva boys” with him to take the home from Sherease’s family by force. We have stood strong. But we need your help! Join us at 964 Park Place to support Sherease and Ms. Robinson. The family is traumatized and exhausted.

What Are We Doing To Legally Protect Sherease?

On February 15, 8 attorneys accompanied Sherease to an emergency virtual hearing on this case. We filed an Order to Show Cause to stay any eviction attempt. We have also brought the Attorney General, Letitia James, as well as Councilman Chi Ossé and State Senator Jabari Brisport and representatives from Eric Adams to 964 Park Place and have informed them of Netz Capital’s crimes. They are working to support Sherease, but we know that the law and the courts are only ever as helpful as we the people force them to be.

What Do We Need to Do Going Forward?

The only way we can ensure Sherease’s right to a safe home is through mass community support. We need every single one of her neighbors: to come by, to support the active defense, to let the “landlord” and his henchmen know that Sherease will not move, to let them know that gentrification stops at 964 Park Place. We need every neighbor to tell their neighbor and friends what’s going on. We will not let them get away with this. We win this fight in the light.

What Is Deed Theft?

Deed theft is a common tool used to displace Black and brown families. It is a hallmark of gentrification and one of the endless tricks that real estate parasites use to maim black communities. In Sherease’s case, seven years ago, a firm approached the family offering help refinancing their mortgage. Her brother began paying off what he and his family believed was the newly financed mortgage. This has since been framed by the thieving real estate company as “rent.” With the support of a team of housing attorneys, Sherease has obtained proof that her “landlords” committed deed forgery.

Join the stoopwatch: Connect with Brooklyn Eviction Defense and Crown Heights Tenant Union to get looped in

Call the AG Letitia James: (800) 771-7755 and demand she investigate and prosecute Menachem Gurevitc’s deed theft crime; and in that restore property to Sherease. Call the Mayor’s office: (212) 788-1400 and demand that his office investigate and prosecute this crime and to also address the deed theft epidemic. Brooklyn Eviction Defense can be reached at (917) 982-2265 or [email protected] Crown Heights Tenant Union can be reached at https://crownheightstenantunion.org/ or [email protected] To stay updated on this issue, follow @brooklynevictiondefense and @crownheightstenantunion on Instagram.