In solidarity with uprisings across the United States, protesters returned to the streets of Paris and other French cities this Saturday to demonstrate against racist police terror. Mobilizations continued throughout the day amid police protests and right-wing demonstrations. 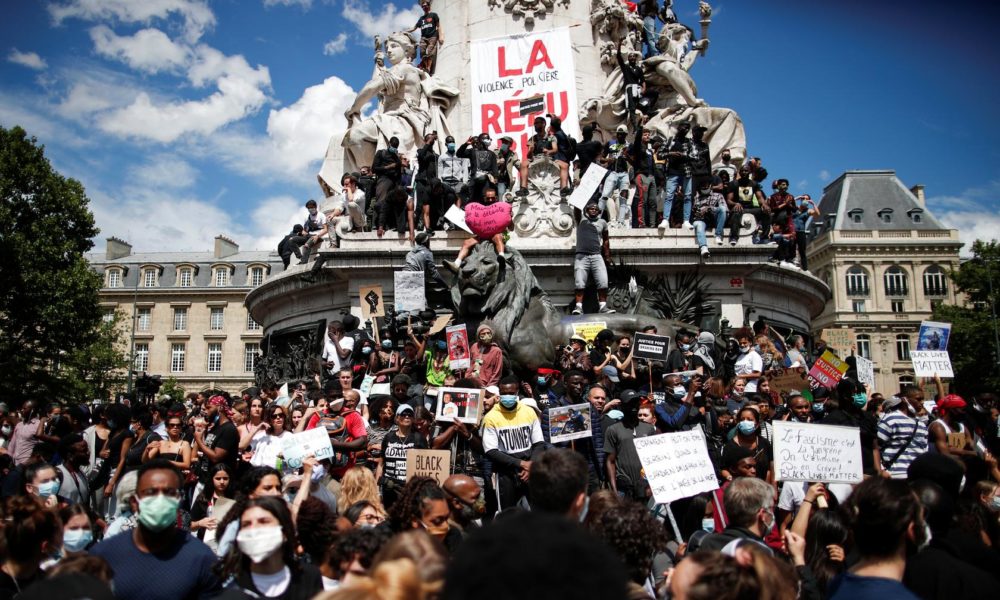 This Saturday, protests in solidarity with the uprising against police violence in the United States continued in France, drawing tens of thousands of people into the streets in Paris and other cities. Despite repression from riot police, clashes with white supremacist groups, and the government’s attempts to contain the protests, the anti-racist struggle is erupting across France. As in the United States, the movement demands justice for decades of systemic police brutality against working people of color and expresses outrage at a government that refuses to recognize the racism ingrained in the French state’s highest institutions.

France’s mobilizations — which began with a massive 40,000 person demonstration on June 2 — have coalesced around the deaths of both George Floyd and Adama Traoré, a young Black man who was killed by French police in 2016. Like Floyd, Traoré was choked and suffocated by the police. “My brother died in the same way as George Floyd,” said Assa Traoré, Adama’s sister, as she addressed a crowd of tens of thousands of people in Paris’s Place de la République on Saturday. “Without justice, there is no peace!”

In the square, protesters joined in the chants of protesters across the Atlantic Ocean in the United States: “Black Lives Matter!” “I can’t breathe!” Signs and banners expressed the common struggle against racism in the heart of these two imperialist powers:  “I hope I don’t get killed for being black today,” read one sign. Other signs and chants pointed to the role the government and its politicians play in the daily violence experienced by people of color at the hands of the police and the laws they protect: “If you sow injustice, you reap a revolt.”

The demonstration defied a nationwide ban on gatherings of more than ten people, a measure implemented earlier in the year to combat the spread of coronavirus but which has been used as an excuse to violently quell the social unrest that has been steadily brewing in France’s working class neighborhoods against repressive lockdown orders and the economic crisis.

The police used this ban as an excuse to declare Saturday’s demonstration illegal. They sent in riot police and vans to surround the rally to prevent it from marching to Place de l’Opéra as planned. But the protesters faced off against the police, refusing to back down. Later in the afternoon, the Council of State, a high court, ruled that the demonstration was legal as long as it was stationary and did not involve more than 5,000 people. This paltry gesture did not stop the police from repressing the demonstration — beating protesters, throwing tear gas canisters into the crowd, and preventing people from leaving the square; however, these attempts to both pacify and repress the movement were not successful at deterring protesters from staying in the streets the entire day.

Saturday’s protest occurred in the context of “reforms” implemented by the government this week to combat police brutality and racism within the police force. The Interior Minister, Christophe Castaner announced new measures on Monday that make chokeholds illegal and institute a policy to suspend any officer “suspected” of racism. But as Saturday’s protest shows, the tens of thousands of the people in the streets see these gestures for what they are: intentionally toothless measures against a system that is racist to its very core, a system rooted in centuries of colonialism, slavery, and anti-Black, anti-immigrant, and therefore anti-working class racism.

But the Black Lives Matter protests were not the only mobilizations on Saturday. Police unions also held marches across the city in protest of the government’s new measures, defending the use of chokeholds to restrain detainees and denying racism in the police force. According to Fabien Vanhemelryck, secretary-general of the Alliance police union, “The police is not racist… it saves lives whatever the colour of the individual’s skin…We need to be protected, respected, supported. The police are never above the law.” But the more than 1,500 complaints of brutality reported against French police in 2019 — most of them from people of color in France’s working class neighborhoods — tell a different story, as do the tens of thousands of people protesting and being repressed in the streets. Once again, the cop unions are using their influence to protect killer cops and defend police immunity. In a show of unity against the protests and against anti-racist struggle, police threw down their handcuffs on Saturday and participated in a march and caravan of police vehicles covered in banners with slogans such as “No Police, No Peace.”

Saturday’s protest was also marked by the intervention of white supremacist groups that interrupted the rally. Identity Generation, an ultra-right wing organization, unfurled a large banner on the roof of one of the houses overlooking the square that read: “Justice for the victims of anti-white racism. #WhiteLivesMatter.” In an inspiring display of solidarity, protesters immediately tore down the banner with help from inhabitants of the apartment building. The action was celebrated by the whole square who shouted “Thank you!”

These events could not overpower the incredible show of solidarity and bravery by the protesters risking arrest and beatings to mobilize against police terror. The demonstration brought together students and workers from different industries, including Anasse Kazib, an activist for the railway workers at Sud Rail and member of the New Anticapitalist Party (NPA) and Révolution Permanente. In an interview for Révolution Permanente, Kazib spoke about the need to link up the workers’ movement with the anti-racist struggle and all struggles against oppression; he argued that the workers’ movement must “create unions with the working class neighborhoods, the feminist movement, and the environmentalists, in order to attack together on the same nail: the bourgeoisie and the government.”

This second historic mobilization in France shows not only that the struggle against racist police violence is international, but that it is also a struggle against governments who make empty promises of reform while they protect killer cops, send the police to repress protests, and make backroom deals with cop unions. In the fight against the police, the politicians of the ruling class are the allies of white supremacists and police unions. The only true solidarity with the movement is that of the working class and oppressed who are coming together across the world to rise up against racist state violence.