On this Fourth of July holiday, police in Hoover, Alabama celebrated in the time honored American tradition of suppressing protests, arresting protesters, and pointing assault weapons at Black people. The fight continues. 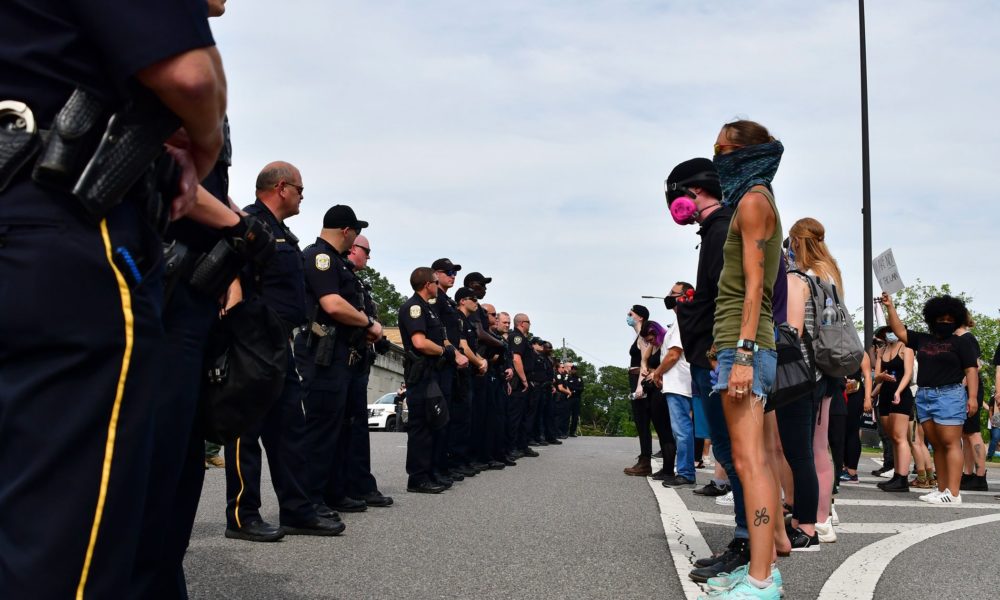 Local organizer Erica “Star” Robbins is the founder of nonprofit called Be A Blessing Birmingham, whose most recent endeavors include a successful $60,000 fundraiser to build a mobile showering unit for the homeless community. She and her protege Satura Dudley, a political science and pre-law student at the University of Alabama Birmingham, have been organizing peaceful protests in the Birmingham suburb of Hoover for over a month now, following national calls for defunding the police and also demanding the release of body cam footage of the murder of E.J. Bradford. Bradford, a former serviceman, was murdered by Hoover Police on Thanksgiving Day in 2018, mistaken for an active shooter at a local mall. The department has refused to release the officer’s body cam footage of the incident, and the officer has been ruled as justified in killing Bradford.

While every protest that Robbins and Dudley have organized in Hoover have remained peaceful, the protesters have been met with excessive force from the Hoover Police Department. The police have routinely arrested more than twenty people at each event. Robbins and other local organizers have raised a bail fund and have spent multiple tireless nights at Hoover Jail, bailing out protesters. Last week, a Hoover Police officer was fired after sharing a picture of a Black protester in the crosshairs of a rifle scope on his Facebook page. Alabama Rally Against Injustice (ARAI), a statewide organization, had planned a protest in Hoover for July 4 but cancelled due to increased threats of violence.

Dudley made sure that the protest would carry on without the involvement of ARAI but was immediately arrested by several Hoover Police officers with assault weapons, who claimed that there was a warrant for her arrest. It was later revealed that the warrant was supposedly issued on the charge of inciting a riot. The problem with this, however, is that no riot ever occurred. Word of Dudley’s arrest spread quickly, and Robbins soon made it to the event at the Hoover Public Library to check in on the well-being of the other protesters before heading to the Hoover Jail to bail out Dudley. However, moments after her arrival at the library, she was approached and arrested by Hoover Police who claimed to have a warrant for her arrest as well. It was later revealed that Robbins’ arrest warrant was issued on the charge of disorderly conduct, supposedly stemming from a previous protest.

The protest at the library carried on while multiple van loads of protesters were arrested. Martez Files, co-founder of local coalition group When We Fight, assumed responsibility for bailing people out. A large group was organized to occupy the Hoover Jail waiting room and demand the release of Dudley, Robbins, and other protesters. Dudley and Robbins had been in custody for over six hours before a single protester was released, and Hoover Police intentionally kept Dudley and Robbins locked up as long as possible. It is also reported that Hoover Police turned the air off in the waiting room of the jail in an effort to exhaust the group demanding the release of the detained protesters. Dudley, a resident of Hoover, was told by Hoover Police that she is banned from all city-owned public spaces. Dudley and Robbins both have legal representation and will be fighting these charges. Neither plan to let these events deter their future organizing efforts.