BLM activists leading the struggle for Justice for Patrick Lyoya were arrested on their way to City Commissioners meeting, and four Black leaders are charged with felony charges. We need every social justice organization, union, and other community and progressive organizations to show their solidarity. 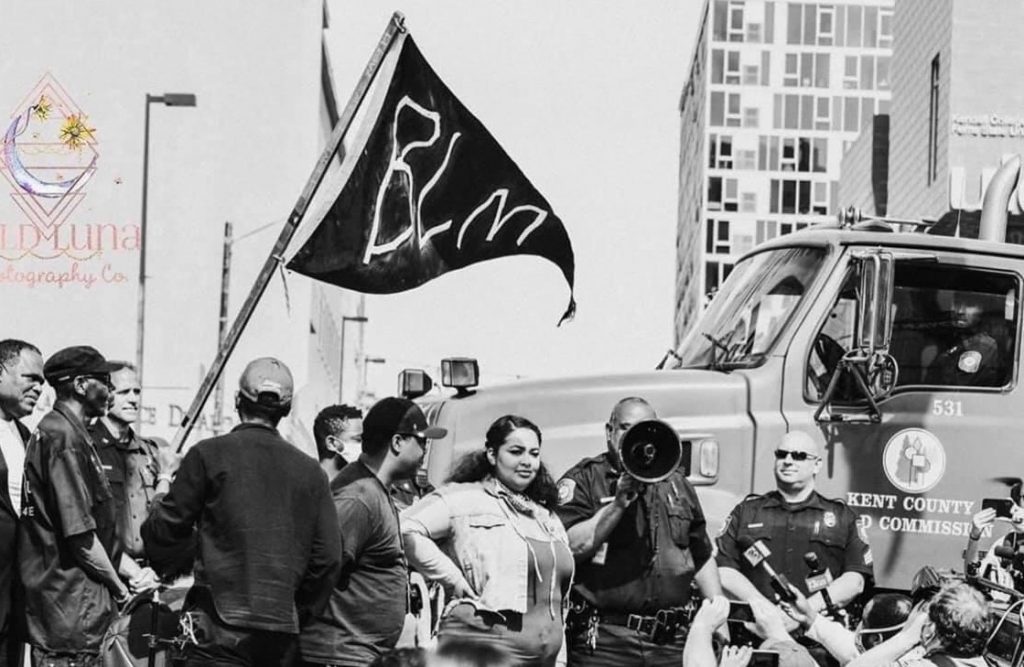 On Tuesday evening, May 24, a group of mostly Black activists in Grand Rapids, Michigan, got pulled over by the Grand Rapids Police Department (GRPD). These activists, who have been some leading figures in the city fighting against police brutality and systemic racism, were in a car with other organizers on their way to a public City Commissioners meeting to speak out against the murder of Patrick Lyoya by the hands of the GRPD. Not knowing why they were pulled over, one of the organizers began livestreaming the incident, knowing all too well the problematic practices of GRDP. When police approached the two cars they pulled over, they revealed that they had arrest warrants for people in the car.

A Pattern of Harassment and Excessive Force

The GRPD has consistently harassed and utilized excessive force against activists, particularly Black movement leaders in the past two years. The Department has brutally arrested and ticketed activists for the “crime” of using a bullhorn without a permit, a “rule” that gets arbitrarily and irregularly enforced — typically only when protest numbers were low.

The recent arrests are a response to protesters speaking out at City Commissioner meetings to demand justice for Patrick Lyoya. In an act of cowardice and unaccountability, City Commissioners ended their meeting on May 10 early because protesters were cursing and talking loudly. When protesters left the building after hours of chanting and arguing with the Chief of Police, police officers charged the crowd heading out, arresting one person that night.

The Troubling Practices of the Grand Rapids Police Department

Grand Rapids is the second largest city in Michigan, with a population of around 199,000 people, 18 percent of whom are Black. The Grand Rapids area is home to the Devos and Prince families, which include former Secretary of Education Betsy Devos and her brother Erik Prince, founder of the notorious private military company Blackwater. The DeVos family owns Amway, and the Princes were wealthy industrialists. Today, they are financial and political powerhouses in the area and within the Republican Party nationally.

The GRPD’s long history of racist violence was recently documented in an article published in Bridge Detroit. The article shows that over the last couple of years, the GRPD has had major and documented police misconduct, including cops aiming their guns at Black youth under 15 on two different occasions, and cops calling Immigration and Customs Enforcement on a Latino man suspected of being undocumented despite the fact that he was not only a U.S. citizen, but a Marine veteran. In total, the article listed 13 incidents and reports showing the racial bias of the GRPD.

A recent incident that was not included in the article happened in April, when a police officer “accidentally” shot at a man they wrongfully suspected of stealing a car. This officer, who barely missed, is being charged with a misdemeanor charge. Other than this charge, only one officer has received any discipline in relation to these incidents.

Meanwhile, the investigation of Christopher Schurr, the cop who shot and killed Patrick Lyoya in the head while he was on top of him, is still ongoing. To date, there hasn’t been a single update on the investigation, and the City has not moved to remove Schurr from the force or even place him on unpaid leave, let alone charge him with a crime.

Stop the Political Repression of the Movement, and Drop the Charges!

What is happening in Grand Rapids isn’t an isolated incident. Members of Detroit Will Breathe (DWB) and other anti-racist and anti-police brutality activists are facing felony and misdemeanor charges stemming from protests in Shelby Township, a suburb of Detroit, and hundreds of people are still facing criminal charges in Minneapolis, the epicenter of the 2020 uprising.

It’s essential that we organize a movement against repression, both in Grand Rapids, Shelby Township, and across the country. This means organizing solidarity actions demanding charges against protesters are dropped. This should include mass meetings, including national ones, where the movement itself can collectively discuss and decide its strategy and tactics it will use to build a campaign against political repression. This can also include a nation-wide phone zap to Kent County prosecutor Christopher Becker’s office, and Grand Rapids City Manager Mark Washington.

If we hope to take on the police and the criminal injustice system, then our movement has to take on as much of a national character as possible, both practically and politically. From a practical standpoint, we need a national campaign fighting against the repression of the movement, which is a political maneuver used by both Democrats and Republicans to disrupt and erase those sectors of the movement that did not get co-opted by the Democrats or completely demobilized.

From a political standpoint, the movement has to hold a collective, deep, and systematic discussion about its strengths and weaknesses, and the lessons we need to learn from the past two years. We also need to debate the fact that the Democratic Party was largely successful in co-opting the movement, why that was able to occur, and what we need to do to combat it.

We need every social justice organization, union, and other community and progressive organizations to show solidarity to the protesters in Grand Rapids and their fight against repression and for justice for Patrick Lyoya.