“To Ally With the Democratic Party Is to Ally Against Ourselves”: BLM Inland Empire Breaks with BLM Global Network 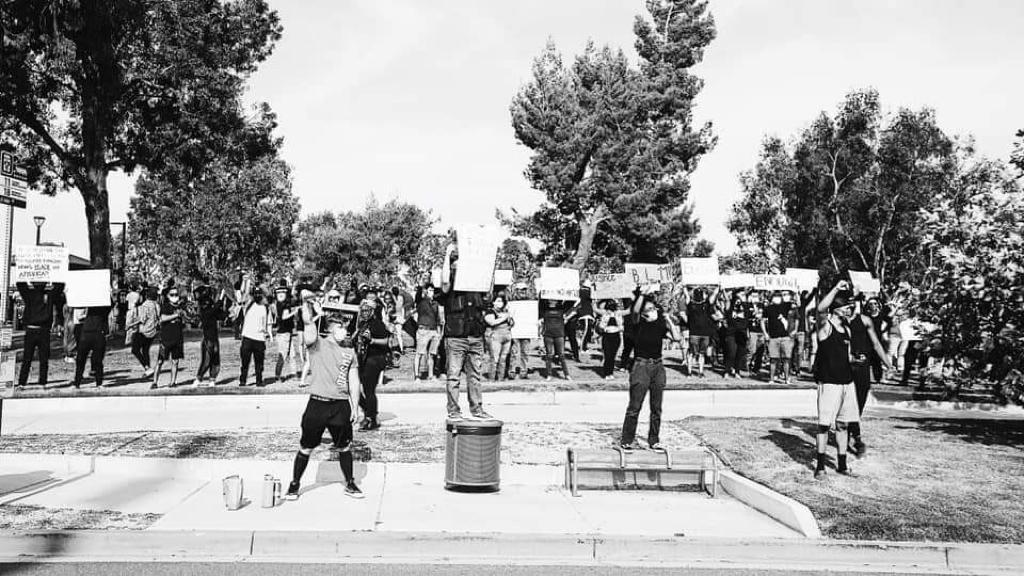 Below we are republishing a statement issued by the group formally known as Black Lives Matter-Inland Empire (BLM IE), California, announcing their break with the Black Lives Matter Global Network (BLMGN). The group is now called The Black Power Collective. We republish this statement as part of our commitment to being a space for discussion and debate among the revolutionary elements within the Black Lives Matter movement that are fighting against the co-optive tactics of the Democratic Party and its surrogates within the “official” non-profit organizations designated as the spokespersons for the movement. This statement is part of a recent fissure within the BLMGN that has already led ten BLM chapters to split with the  bureaucratically imposed leadership.

We believe this statement should be a jumping off point to be discussed and debated. We view this statement and action as an important positive step for the movement for Black and Brown lives because it calls out the nature of the Democratic Party as the instrument of racist, capitalist oppression, because it rejects the idea that liberation can be achieved by forms of “Black capitalism,” and because it touches on the need for the movement to have an internationalist, anti-imperialist focus.

Recently, a group of BLM chapters known as the BLM 10 has come forward to voice their concerns and opposition to the Global Network. Those concerns, along with the egregious conduct the Global network demonstrated on Dr. Martin Luther King’s birthday, have brought us to the conclusion that continuing to remain silent would be an act of betrayal. While the issues and problems that have been raised have been well known within our circle for years, it prompted many questions & concerns for us locally. We’d like to let the community know everything outlined in the statement put out by the BLM 10 is valid. We’ve also reached out to the BLM 10 and offered to sign on in support. Hopefully, we can provide insight and clarification into our chapter’s history, our relationship with the global network, and our commitments going forward.

When BLM IE first started, we were originally known as the Black and Brown Underground (BBU). In 2015 we were approached by an individual named Patrisse Cullors, who offered us an opportunity to join the Global Network and organize as a Black Lives Matter chapter.  After hearing her proposal, we believed that our work, direction, and principles aligned and agreed to join the network; renaming ourselves Black Lives Matter Inland Empire in the process. We were told that the organization we were joining was decentralized and leaderless, but we quickly discovered that was not the case. The Global Network is a top-down dogmatic organization that promotes certain chapters that choose to align with their direction and sequester the ones that don’t. For us locally, that chapter has been Los Angeles.

For years, the leadership of the Los Angeles chapter has aligned with the Global network and One United Bank to impose on various chapters, particularly ours. We believe that while doing this they received substantial donations and funding, despite them continually soliciting the community for donations. Together, the Los Angeles Chapter along with the Global Network have consistently tried to strong-arm other groups and  have worked to undermine a grassroots movement by capitalizing on unpaid labor, suppressing any internal attempt at democracy, commodifying Black death, and profiting from the same pain and suffering inflicted on Black communities that we’re fighting to end. In spite of  being ostracised, receiving no financial support, and the maltreatment from both the Global Network and Los Angeles Chapter we’ve maintained our composure while working to the benefit of our community and victims of state sanctioned violence.

Clearly, we do not have the same beliefs or sense of ethics. We no longer feel, as we initially did, that our politics align. As a result, we are announcing that we are no longer associated or connected to the BLM Global Network. As an attempt to distance ourselves, we have decided to rename part of our organization The Black Power Collective while we restructure.

The use of the BLM name, which we believed was intended to unify our struggle, has been commodified and debased. It is now being used to sell products, acquire book deals, T.V. deals, and speaking engagements. We have no interest in these pursuits, and we are opposed to the movement to substitute Black capitalism for white capitalism. It has become clear that the Global network and certain figures have platformed our struggles with the sole purpose of exploiting our labor.

Furthermore, the issue of greatest concern for us is the relationship between the Global Network and the Democratic Party. This is hypocritical at best, as the Democratic Party has historically rejected and ignored BLM’s demands and has made it clear that they are pro-police, pro-prison, and committed to capitalism. From Obama’s support of police and his double-cross of Erica Garner, to “Top Cop” Kamala Harris’ denial of justice for Matrice Richardson, even going back to the 1994 Crime Bill authored by Joe Biden along with the Prisoner Litigation Reform Act that stripped basic human rights from countless Black people—the Democratic Party has literally created the conditions that led to the formation of this movement. Even now, the Demoractic party continues to support imperialism, killing African heads of state, bombing Somalia, abusing immigrants (including those of the Black diaspora), and spreading the U.S. military throughout Black and Brown countries around the world. This is a party that is a threat both here and internationally. To ally with them is to ally against ourselves.

The BLM10 statement calls out the lack of financial transparency and power moves by Patrisse Cullors and others. The actions demonstrated by the Global network have provided proof that the Global Network is essentially a steering committee acting in the best interest of various fractions within the Democratic Party. Additionally, the creation of the Black Lives Matter Political Action Committee is a violation of our collective agreement. This agreement was composed of two rules: 1. We do not work with police, 2. We do not endorse politicians. We had hoped that those rules would protect our struggle from being corrupted by the nonprofit sector or absorbed into the Democratic party. However, it now appears that the same fate that many activist groups before us fell victim to is the same fate that the BLM Global Network are destined to face. They have not only aligned with a political party, they’ve used the finances they acquired from a massive uprising during a global pandemic to create the aforementioned BLM PAC.

We believe that all finances should be clear and transparent to the Black community. We also believe they should be controlled by chapters that adhere to a democratic structure along with community checks and balances. Leaders that appoint themselves can no longer serve or be seen as leaders.  We can not accept charismatic figures imposing themselves as dictators, nor can we support personality cults.  In the spirit of Audre Lordre  and Ella Baker we believe that, ‘’…the master’s tools will never dismantle the master’s house” and that “…strong people don’t need strong leaders”.  To that end, it is imperative that we engage in the struggle with our own tools and work to build a stronger people.

We would also like to address the violent rumor-mongering directed towards a member of our group who was maliciously accused of being a member of law enforcement. These slanderous accusations came from a leader of BLM LA and a  figurehead of the Global Network. These accusations were nothing but an attempt to duck accountability for the way members of national leadership have treated victims of police brutality and a violation of their own policies. The bullying and attempts to silence smaller chapters and individuals who speak up must end.

Let us be clear, we are not the authors of the discord within our movement.  Malcolm X encouraged us to handle our differences behind closed doors, but all attempts at that have failed. This corruption has thrived in part due to our silence and for that we must apologize.

“Hide nothing from the masses of our people. Tell no lies. Expose lies whenever they are told. Mask no difficulties, mistakes, failures. Claim no easy victories…”-Amilcar Cabal