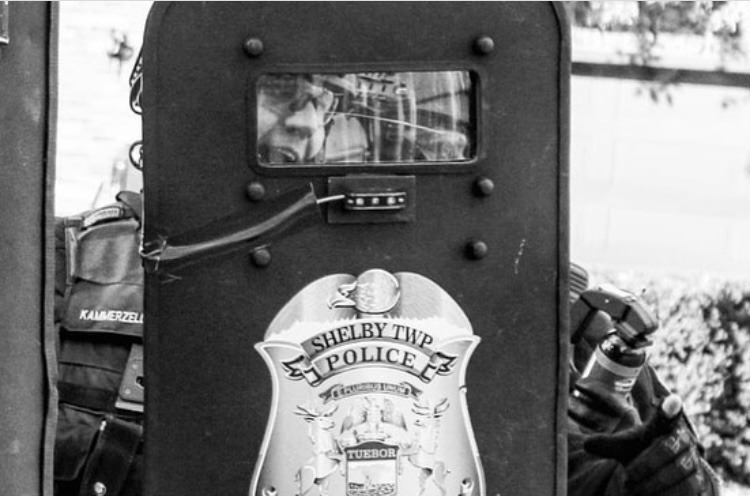 Tristan Taylor, a co-founder of Detroit Will Breathe (DWB) and a Left Voice member, is defending himself in court on Monday, May 23, against felony charges for protesting the murders of George Floyd and Breonna Taylor in 2020. Taylor is one of the Shelby 5, a group of protestors facing felony charges for demanding that Robert Shellide, the Chief of Police in Shelby Township, Michigan, be fired for posting violently racist remarks about the mass protests. Several additional protestors were charged with misdemeanors.

On Taylor’s court date, Monday May 23, Detroit Will Breathe, an organization which was born in the heat of the Black Lives Matter movement, is calling their supporters to mobilize in support of a motion to get the felony charge thrown out.  The legal motion filed by Taylor’s lawyer makes clear that not only was Taylor targeted by Shelby Township as a Black leader of DWB, but that his arrest was a violation of his civil rights.

When news leaked about Shelby Township Chief of Police Robert Shelide making violently racist remarks on his ghost twitter account, local activists responded with protests demanding that he resign or be removed.  Shelide tweeted that he “[wished] to God I would have been there.  Body bags for these vicious subhumans”  and that “real cops” would “take care of these barbarians”.  It should come as no surprise that Shelide, the Shelby Township police department, and the Township government failed to even release a statement denouncing the death of George Floyd.  In fact, one of the Board of Trustees posted a racist meme and mocked George Floyd on twitter.

Doubling down on Shelide’s racist remarks, Shelby Township Police responded aggressively to BLM protestors calling on Shelide to resign or be removed. Since the first march against Shelide on June 2, 2020, Shelby Township police arrested protestors for simply marching in the streets.  To the credit of the protest movement in Shelby Township organized under SHIFT- Suburban Solidarity for Social Justice, they continued to speak out and demand Shelide be removed, and call out the racist practices of Shelby Township.

On October 24, 2020, DWB joined SHIFT to make sure that Shelide’s racist remarks, and Shelby Township’s failure to hold him to account, were not forgotten. The response to the protest was overwhelming and violent repression. When protestors stepped onto the street to march, police immediately arrested Taylor and four others, and ticketed support vehicles. When the march continued on the sidewalk of the main street, police cars with flashing lights took over the entire road next to them.  Shelby Township not only mobilized the full force of their own department, but coordinated at least three neighboring police departments to repress the movement.  When protestors returned to where their vehicles were parked, the combined police force surrounded them on all sides. Police even pulled over and ticketed the first few cars to leave the protest.

The violence of the Shelby Township police department is not only expressed by Shellide’s comments and their treatment of BLM protestors.  The police department was sued last year by the mother of Kanwarbir Malhi, who was killed by Shelby Township police in 2018.  Kanwarbir’s mother, Gurraj Malhi, had called the police herself to report him missing and told them that he had mental health issues.  But the Shelby Township police murdered him just the same and then called the shooting justified because Kanwarbir had not complied with their demands to raise his hands, even though he was in a parked car, with his hands on the steering wheel, and surrounded by police.  Attorney General Dana Nessel — a Democrat — also called the shooting justified, proving once again that the Democratic Party cannot be relied on to provide justice.

Macomb County Prosecutor Peter Lucido, a Trump Republican, has refused to offer any reasonable plea to the Shelby 5, who each face a felony charge of resisting/obstructing/assaulting a police officer.  Lucido has offered the Shelby 5 a plea deal to a misdemeanor charge of assault and battery of a police officer, even though it was the police who assaulted protestors.

Lucido is no stranger to problematic personal behavior. An investigation conducted when he was a State Senator concluded that he had engaged in “inappropriate workplace behavior” after several women filed sexual harassment complaints against him. Lucido is also known for telling a female reporter in front of a group of male high school students that she “could have a lot of fun with these boys, or they could have a lot of fun with you.”

The actions of the police, prosecutor, and local government are similar to the practice of racist police departments and local governments in the Jim Crow South.  They were violently racist, and undemocratic practices that are a shameful part of this nation’s history, and such practices cannot be allowed to take root unchallenged now.

Whether you are in Michigan or not, you can take action to show solidarity with the Shelby 5 and the rest of the protestors facing charges.  Sign and circulate the petition demanding charges be dropped against the Shelby 5 and all protestors facing charges in Shelby Township. If you belong to an organization, be it a union or social justice group, release a statement of solidarity demanding that Macomb County Prosecutor Lucido and the Shelby Police Department drop the charges against protestors, and fire Shellide for his violently racist comments.  Finally, follow the social media  accounts of Detroit Will Breathe and Left Voice that can be found on their website to keep updated on the next steps for the campaign.