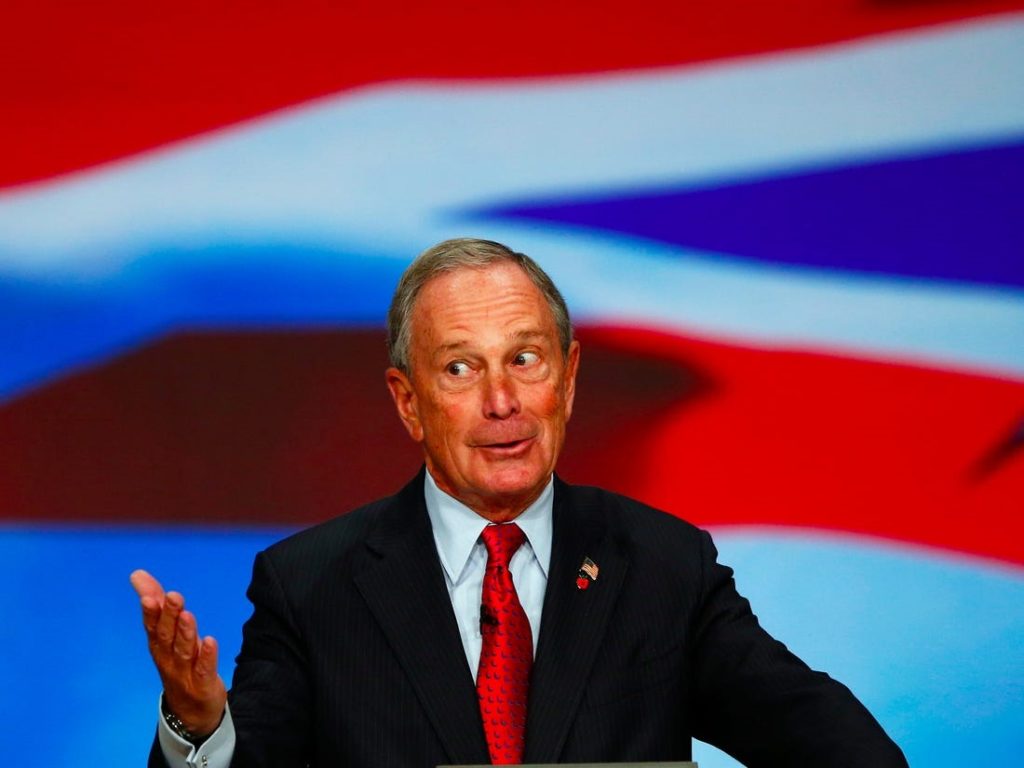 Michael Bloomberg, the technocratic former mayor of New York City vying to be the Democratic nominee for president, is no longer on the sidelines. In a recent national poll, Bloomberg tied for third place with Elizabeth Warren with 14 percent of support among potential voters. With Bloomberg’s rapid ascent as a major presidential contender, Donald Trump, the Democratic establishment, and the mainstream press are all taking notice.

According to the ad tracking firm Advertising Analytics, Bloomberg has already spent an unprecedented $300 million of his own money on TV, radio, and digital advertising. Bloomberg, who is self-financing his campaign, is basing it on his self-proclaimed success as a technocratic, data-driven mayor and global business leader.

In the aftermath of the disastrous Iowa caucuses, where fellow centrist candidates like Joe Biden performed poorly and competitive candidates like Bernie Sanders were weakened by the delayed results, Bloomberg, who is skipping the early states, came out unscathed. He capitalized on the Iowa fiasco by announcing he would double the amount he has already spent on his campaign. When you are the 14th richest person in the world, decisions like that are easy to make.

“Things are going well. That’s when you want to put more money in,” Bloomberg said in an  interview on Tuesday.

How Bloomberg is plotting to win

Bloomberg’s purported strategy centers around performing well in the delegate-rich Super Tuesday states rather than early voting states like Iowa and New Hampshire. Ultimately, the Bloomberg campaign is positioning itself to fill a centrist vacuum if Biden, the top establishment candidate, flounders. Though Bloomberg has stated he would eventually back whoever becomes the Democratic nominee, he has expressed concern that none of the top candidates can defeat Trump.

It’s not surprising that Bloomberg might be especially concerned about Bernie Sanders’ or Elizabeth Warren’s campaign. Both candidates are vocal about their antipathy to the billionaire class and have been close to or at the top of polls for many months. Bradley Tusk, who managed Bloomberg’s 2009 mayoral campaign and is advising him on his current presidential run recently touched upon Sanders in particular as a target for Bloomberg, should he sweep the early contests:

“If Sanders soars through the first four primaries and Biden and [Pete Buttigieg] stumble, Mike may end up as the only thing standing between Bernie and the nomination.”

Though Bloomberg has positioned himself as an outsider and an independent (he has rotated his party affiliation between being a Republican, Independent, and Democrat), he shares deep ties with the DNC and the establishment wing of the party in particular.

Two Bloomberg surrogates sit on the DNC rules committee and Bloomberg is a frequent donor to the party. Two days before entering the 2020 race, Bloomberg donated $300,000 to the DNC and made a $800,000 contribution to the Democratic Grassroots Victory Fund, a joint fundraising PAC between the DNC and state Democratic parties.

Last week, DNC chair Tom Perez, shocked even those within his party by unilaterally eliminating the individual-donor requirement for candidates to qualify for Democratic debates. Bloomberg, who relies on his own funds rather than individual-donors, was previously ineligible to participate in the debates. He can now appear at the next debate, which will be held on Feb. 19 in Las Vegas, Nevada.

By evading the debate stage thus far, he has also tactically evaded scrutiny from other Democratic candidates. Biden and Warren both know the make or break nature of the debates after all. At this point in the primary season, however, Bloomberg might finally be ready to face the debate stage and solidify his growing support.

The undemocratic character of the American electoral system is perhaps most apparent here, when a “mega-billionaire with umbilical ties to Wall Street” is a viable candidate for president. Bloomberg is 17 times richer than fellow billionaire Donald Trump, whose 2016 campaign spending dwarfed that of Bloomberg.

In a country like America, where “democracy” serves billionaires like Bloomberg and Tom Steyer instead of the exploited classes, rich candidates can simply bankroll their campaigns. Court rulings like Citizens United, furthermore, have allowed unrestricted campaign spending under the auspices of political action committees (PACs).

Bloomberg has not only vastly outspent crowdfunded campaigns, but also every single billionaire’s campaign prior to this. People like Bloomberg, with no shortage of cash on hand, simply wield money as power and set new precedents for their fellow billionaires of how far one can go.

Bloomberg’s ads praise the former Republican mayor’s entrepreneurial and political success in New York after the September 11 attacks and on issues like climate change. Despite the praise, Bloomberg is best remembered in New York for his support for NYPD’s racist “stop-and-frisk” policy and long term of twelve years in office — one that was only possible through a change in term-limit laws lobbied by charities receiving generous donations from Bloomberg.

Like his presidential campaign, Bloomberg’s approach to rising and staying in office as Mayor involved spending a staggering amount of money. He spent $250 million dollars on his campaign over three terms.  During his years in office, Bloomberg was at helm of massive teacher layoffs, funding cuts and attacks on city workers. More recently, the Bloomberg campaign was criticized for contracting with a call center that used prison labor. Clearly, Bloomberg is not the working class hero his ads tout him to be.

Bloomberg also generated controversy when the editor-in-chief of Bloomberg News, the eponymous and influential news service owned by Bloomberg (as part of the Bloomberg L.P. financial empire) ordered the company’s 2,700 journalists to avoid doing any investigative stories on the campaign of their boss.

Bloomberg must be stopped

Oligarchs like Bloomberg, who have amassed their billions off the exploitation of others and can effortlessly buy political power show the extent to which the US is a pseudo-democracy that is in the hands of a small group of wealthy elite.

Workers can’t count on the Republicans or the Democrats to address this failed democracy. Time and time again, as with the Bloomberg campaign, Republicans and Democrats alike have proved that they will do nothing to challenge the status quo.

Socialists and the working class need to fight for our own party and run our own candidates if we want a serious chance at addressing our exploitation at the hands of capitalists like Bloomberg and the institutions that support them.