The Argentine police found a body last Tuesday where indigenous rights activist Santiago Maldonado had disappeared on August 1. Maldonado disappeared following a violent repression by the Gendarmerie in the southern province of Chubut — repression directed against the Mapuche people who are fighting for their lands against Italian textile company Benetton, the biggest landowner […] 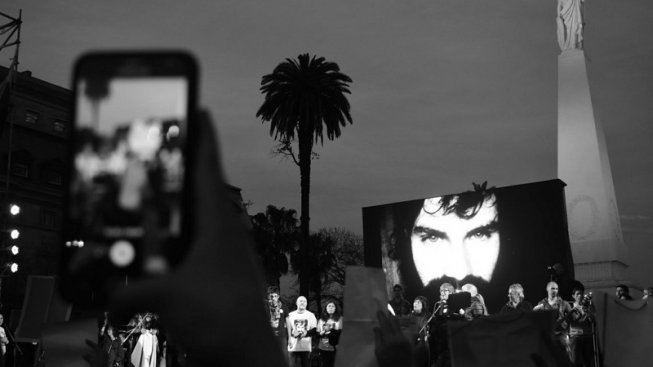 The Argentine police found a body last Tuesday where indigenous rights activist Santiago Maldonado had disappeared on August 1. Maldonado disappeared following a violent repression by the Gendarmerie in the southern province of Chubut — repression directed against the Mapuche people who are fighting for their lands against Italian textile company Benetton, the biggest landowner in Patagonia. The repression had been orchestrated by Pablo Noceti, Chief of Cabinet of the National Ministry of Security.

This Friday afternoon, Sergio Maldonado, Santiago’s brother, confirmed that the family had recognized the body during the autopsy. The confirmation has shocked the country, after millions of people throughout Argentina had participated almost 80 day in a massive campaign for his reappearance.

The body was found submerged in the Chubut River within the indigenous Mapuche community in Cushamen during the fourth search conducted in the Chubut river area, ordered by Judge Gustavo Lleral. The previous search had been ordered on September 18 by the former judge hearing the case, Guido Otranto, who was challenged by the Maldonado family and subsequently removed as a result of his evident bias in the case.

Hundreds of officers of different forces had participated in the search conducted on that date, during which a brutal repression was carried out against the indigenous community. No one, including Sergio Maldonado, was allowed to enter the area of the search until 7 hours after the end of the operation. Since the body was found last Tuesday, Santiago’s family and the human rights organizations that participated in the last search have thus maintained that it is likely that the body was planted in the area.

From the moment Santiago disappeared, the investigation of the case has been grossly mishandled and riddled with false clues planted by the Gendarmerie, the intelligence services, the national government and the pro-government media, who launched a campaign to demonize the Mapuche community and Santiago himself.

The National Ministry of Security, Patricia Bullrich, has defended the Gendarmerie publicly on multiple occasions, both in the media as well as in the National Congress. Her resignation has been demanded by millions throughout the country on social media and during the massive actions carried out demanding Santiago’s reappearance. The appearance of the body could now lead to new actions aimed at concealing the culpability of the Gendarmerie and of the Ministry of Security.

The confirmation of the area where the body was located has only increased suspicions of state mishandling and concealment. In the first statement issued by the judicial branch, the District Attorney’s office of Esquel in Chubut claims that the body was found “approximately 300 meters upstream” of the place where Santiago Maldonado was seen for the last time. The population is now wondering how Maldonado’s body could have moved against the current and ended up in that area.

The Responsibility of the Judicial Branch

The first judge to hear the case, Guido Otranto, had been accused by the family as acting as “the Gendarmerie’s attorney.” Otranto had stalled the investigation of the force that had carried out the repression and had systematically refused to summon Pablo Noceti to testify.

An official of the National Ministry of Security, Gonzalo Cané, had also coordinated actions with the judge to prepare the testimonies of the gendarmes who had acted during the repression. The testimonies were eventually made public and proved to be inconsistent, confirming that Minister Bullrich’s initial statements were false.

Otranto was subsequently removed from the case following a request for his recusal issued by the family and by human rights organizations. The recusal was accepted after the judge had publicly declared in an interview for the newspaper La Nación that Santiago “had drowned.”

The Fight against Impunity

The population has reacted with outrage on social media and on the streets. Protests were held last night after the identity of the body was confirmed by Santiago’s relatives and demonstrations have been planned for this afternoon all over the country.

This outrage needs to result in organization, so the direct and political perpetrators can be brought to justice. The profound commitment to this cause shown by broad sectors of the society during the massive mobilizations carried out on September 1 and October 1 now needs to be directed towards the struggle against impunity.