As the body count rises in El Alto, police forces continue to repress the indigenous population that has refused to acknowledge the racist coup government. 8 people protesting the right-wing coup were killed by police repression on Tuesday. On Thursday, the Bolivian military tear-gassed their funeral procession. 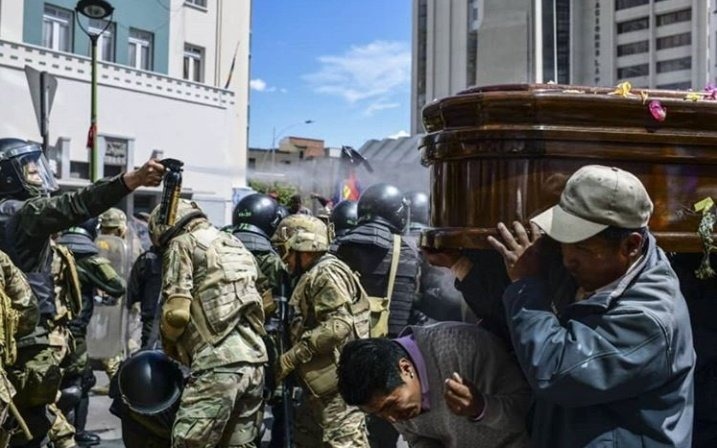 The right wing coup in Bolivia has put power into the hands of a racist right wing police force, the Catholic church and the capitalist class. But, indigenous groups and workers organizations are fighting back- organizing roadblocks, mass protests, assemblies and self defense committees. So far, more than 32 people have been killed in clashes with police, including 8 on Tuesday at a Senkata gas plant.

On Thursday, a massive march descended from the indigenous working class city of El Alto to La Paz. The marchers were demanding justice for the eight protesters who died in the repression against the Senkata plant protests as well as the resignation of self-proclaimed president Áñez.

“Murderers!” “murderers!” screamed the multitude that marched for hours from Senkata, in El Alto. “We are not terrorists… we are El Alto, and El Alto wants respect!” was one of the chants, followed by “Áñez, murderer, the people don’t want you.”

You may be interested in Indigenous Workers Build Self Defense Committees, Fight Bolivia’s Coup

Although authorities tried to stop the march, the police and military barrage could not contain the massive protests. As the marchers reached the Presidential Palace, the police attacked. They tear gassed the protesters who were carrying coffins on their shoulders. They gassed a community in mourning.

“We weren’t doing anything! We brought them here so that they won’t say that we are lying. That these are false deaths. We were holding coffins, and they tear gassed us” a young woman cried. “There is a little girl here. A child! This is a dictatorship. Really, a dictatorship. They are killing us.” 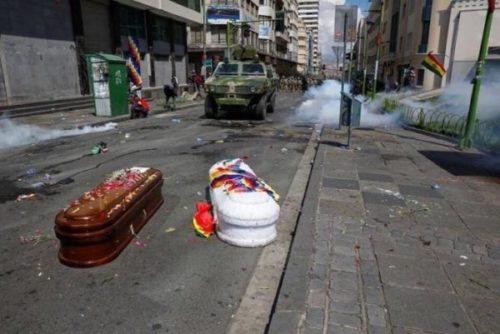 In their desperation to escape from the police, the protesters couldn’t bring two of the coffins with them. They remained on the ground near a military vehicle.

Only one protester, maybe a relative, stayed there, crouched down in the middle of the fog from the tear gas, next to one of the coffins. Minutes later, the protesters returned, having cleaned their stinging eyes with water and ready to carry the coffins away.

That protest was one of the decisions taken by the assembly in Senkata, who voted to organize the protest/procession to show Bolivia what the coup is doing. They also agreed to demand the freedom of all those who have been arrested since the coup and called for united action against the interim government across the country.

“They want to kill us, and we won’t allow it,” a man said out loud, standing next to two of the coffins and looking towards the military and the police.

“Let them kill us” a woman cried in the middle of the rage and the tears produced by the tear gas, “we will continue to block the road, let them come.” Others tried to reassemble the protesters that were running away, yelling “come back! Come back!”

While repression hit La Paz, bulldozers moved towards the protesters in the Senkata area in order to clear the road that led to the plant. During the day other districts and neighborhoods joined the protests and took more radical measures, blocking roads all over Bolivia.

Meanwhile, Evo Morales’ MAS and the Central Obrera Boliviana (COB) have given in and  recognized the self-proclaimed president, validating the coup d’état by negotiating elections with Áñez and the right wing racists that started it.

These indigenous protesters know what they are up against: a police force that have ripped off the indigenous symbols from their uniforms and burned the wiphala flag. They are up against Jeanine Áñez and her recent executive order that has essentially given the police and military a license to kill with impunity. And they are being shot with live ammunition. But they are fighting anyway. They are organizing democratic assemblies and radicalized protests. They know what is at stake if the coup is allowed to maintain itself.