Bolsonaro Has the Coronavirus

Bolosonaro is trying to reopen Brazil and vetoed a law that would make the use of masks obligatory. However, at an in-person press conference on Tuesday, he announced that he has the coronavirus. 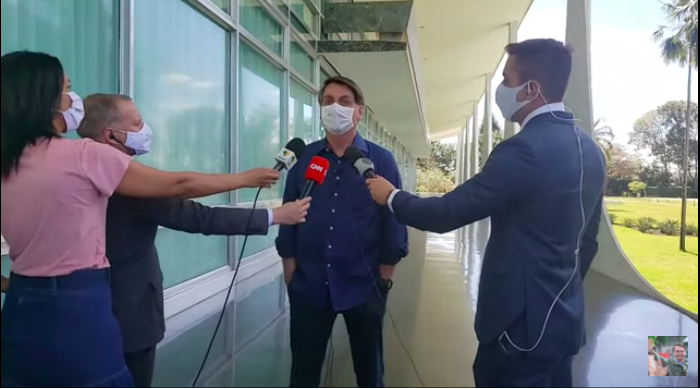 Jair Bolsonaro confirmed in a press conference on Tuesday that he tested positive for Covid-19.

The ultra-right-wing president of Brazil has had a Trump-like response to the coronavirus. He denied the risk of the virus, recommended taking the untested drug hydroxychloroquine, and vetoed the mandatory use of face masks in schools, shops, churches, and prisons. As a result, Brazil has become the new epicenter of the pandemic. And now, Bolsonaro has confirmed that he tested positive for coronavirus and is presenting symptoms of fever and weakness.

Bolsonaro attended a midday press conference on Tuesday in person where he confirmed that he tested positive for Covid-19 and that he had presented symptoms on Monday. He also confirmed that he is receiving a treatment of hydroxychloroquine and azithromycin as a preventive measure, although neither drug has proven effective in fighting the virus.

In the past, Bolsonaro has refused to wear a mask but was recently forced by court order to do so. Although Bolsnaro did wear a mask after testing positive for Covid-19, he did not socially distance from the journalists at the press conference, who were less than a meter away from him.

In addition to being tested for Covid-19, Bolsonaro underwent an MRI lung screening. Both procedures were performed at the Armed Forces Hospital. This, of course, is not the kind of treatment available to working-class people who test positive for the virus.

Members of the Bolsonaro family who live with him at Alvorada, the presidential palace, as well as employees who have had contact with the president, are also being tested. The president is among the highest risk group of patients who contract Covid-19 as he is 65 years old. Since first showing symptoms of coronavirus, Bolsonaro’s schedule for the rest of the week has been canceled.

Bolsonaro has never attempted to socially distance and has consistently refused to wear a mask. Last Friday, he had an intimate lunch with a group of businessmen at the Palácio da Alvorada, intentionally neglecting these important safety measures to prevent the spread of the virus. The next day, Bolsonaro and some ministers had lunch at the house of the U.S. Ambassador in Brasilia, Todd Chapman, to celebrate July 4. Again, no social distancing measures were maintained and no masks were worn.

These measures are deadly towards imprisoned populations because of the overcrowding in Brazilian prisons, which has one of the most overcrowded prison systems in the world, totaling 750,000 inmates. It is also harmful towards low-wage workers who will have to buy their own masks as the presidential veto exempts bosses from providing these protections to workers.

Brazil currently has the second highest number of positive coronavirus cases in the world, behind only the United States, and a high daily death rate — about 1,000 per day. Similarly to the United States, those most affected are working-class Black people, who are dying at extremely high rates. This is the catastrophic result of Bolsonaro’s ludicrous policies which refuse to take the virus seriously. Although the coronavirus has not yet reached its peak in Brazil, Bolsonaro is trying to reopen the country.

This article was originally published in La Izquierda Diario.