The Brazilian President called the military to commemorate the anniversary of Brazil’s 1964 coup. 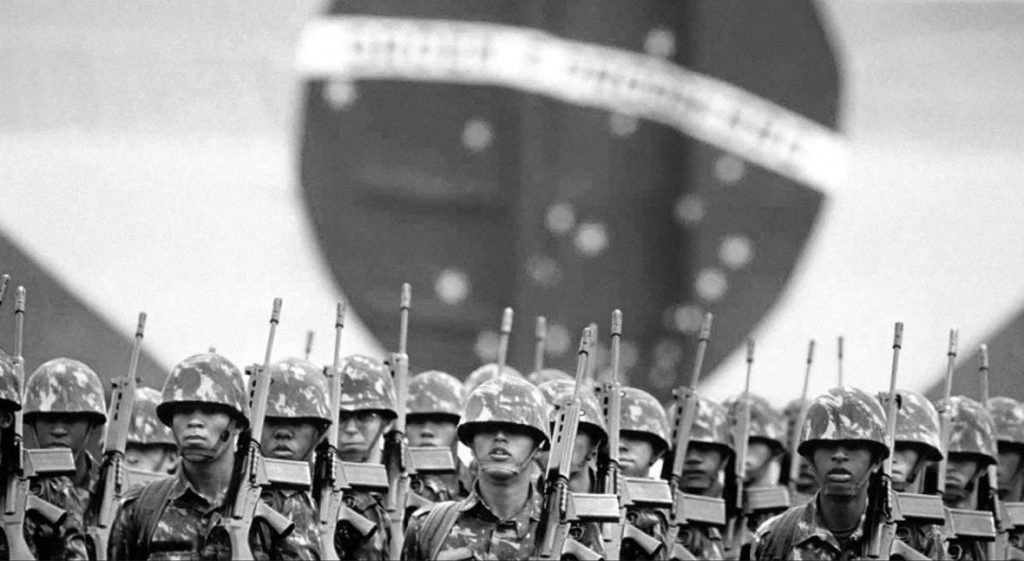 On Sunday, at President Jair Bolsonaro’s orders, the country’s armed forces will commemorate the Brazilian coup of 1964, which unleashed 21 years of military rule. The military coup, which was supported by the CIA, lasted until 1985 and involved the disappearance and torture of hundreds of people who had been dubbed “communists,” as well as the persecution of oppressed communities including trans people and indigenous people.

The coup in Brazil was the first in a wave of CIA-sponsored dictatorships in Latin America. including in Uruguay and Chile in 1973 and in Argentina in 1976.

Although it is appalling and disgusting to celebrate a military dictatorship that killed hundreds and curtailed even the most basic civil liberties, Bolsonaro’s order comes as no surprise. He has made no secret of his admiration for the military dictatorship, describing it as a “very good period” that kept Brazil from becoming communist. He said, “The dictatorship’s mistake was to torture but not kill”– implying that the military should have disappeared more people.

Bolsonaro himself came to power as the product of an institutional coup against Workers Party President Dilma Rousseff in 2016 and the imprisonment of favorite candidate in the then-upcoming presidential election, Lula in 2018. In fact, Bolsonaro even dedicated his vote for the impeachment of Dilma Rousseff to the deceased war criminal and torturer Coronel Ustra, a leader in the military’s secret police.

The military coup was organized by Brazilian capitalists and landowners with the support of the CIA and the Johnson administration, all of whom are increasingly made uncomfortable by mobilizations of farmers and workers in Brazil, particularly in the wake of the Cuban Revolution. The military dictatorship implemented neoliberal and pro-imperialist reforms which included slashing the minimum wage, barring the right to strike, massacring indigenous people while taking away their land, and destroying the Amazon rainforest.

Yet some people in Brazil share some level of nostalgia for the military dictatorship. Poverty, crippling unemployment—and even higher underemployment—and a crumbling infrastructure create massive social tensions and high rates of crime. Last year’s government estimates say that 63,880 people were murdered. It is essentially impossible to live in Brazil without, at the very least, one’s cell phone getting stolen. Shootouts are common, sometimes keeping people from going to work or school. The response given by Bolsonaro? The most punitive and dictatorial answer: nostalgia for a “law and order” military dictatorship.

Bolsonaro goes even further, suggesting that the police should be allowed to murder with impunity. A “good criminal is a dead criminal,” he said on the campaign trail. The Brazilian police are already among the most brutal in the world, and although it is not law, they do in fact kill with impunity. In 2018, the police killed 14 people a day, and those are only the official numbers.

Between March and September of 2018 in Rio de Janeiro, for example, where the military took over “security” operations, the police and the army killed at least 922 people in the state of Rio de Janeiro—over 100 people a month. Almost one out of every four people killed in Rio since March  has been at the hands of the police or the military. None were prosecuted.

Perhaps the most famous murder in the past year was the brutal assassination  of Marielle Franco, the city council member from the Party of Socialism and Liberty. In a politically-motivated murder, the socialist and human rights advocate was shot in her car alongside her driver. The police investigation dragged on for a year. In the meantime, the strength of the right wing increased, with Lula thrown in jail and Bolsonaro winning the Presidency. A year later, two people were taken into custody in Marielle’s assassination, both with ties to the Bolsonaro family.

Throughout the electoral campaign there were increased attacks against leftists and oppressed people—most notably the murder of anti-racist activist and capoeira instructor, Mestre Moa. In his inauguration speech Bolsonaro claimed to be on a crusade against Marxism, as well as against “gender ideology”: declaring a war on the women’s movement and on LGBT people.

When the military dictatorship of the 60’s emerged, communism seem to be a plausible “threat” compared to the situation today  After all, Cuba had just had a successful revolution, farmers had begun to mobilize for land reform, and the Brazilian working class was mobilizing for labor reform as well. The fear that Brazil might become not just another Cuba, but another China, with massive influence in the region—this time in the U.S.’s backyard—was enough motivation for the U.S. to organize a military coup. Bolsonaro claims that the coup saved Brazilian democracy from communism. Bolsonaro’s spokesperson General Otávio Rêgo Barros said, “The president does not consider 31 March 1964 a military coup. He believes that—considering the danger [Brazil] was in—society brought together civilians and the military to put the country back on track.”

Sergio Moro was the U.S. State-Department-trained judge behind the soft coup against former President Dilma Rousseff and Lula’s imprisonment (to prevent him from running in the elections).  He said that military leaders were authoritarian, but “what really matters is that we recovered our democracy.” Given the fact that Moro barred the Brazilian people from voting for their candidate of choice, this statement drips with hypocrisy.

At the same time, some military leaders claimed that Bolsonaro is merely publicizing what has long been common practice in the military. Retired General Gilberto Pimentel said, “We have always marked the revolution on 31 March. This is nothing new.”

In fact, the genocidal leaders of Brazil’s military dictatorship were never punished. During the dictatorship itself, to ensure that the crimes would go unpunished, an amnesty law was passed and was upheld in 2010 by the Supreme Court.

Despite the fact that former President Dilma Rousseff was captured and tortured, the Workers Party (PT)—like all previous parties in power—did not challenge the amnesty law. Although a “Truth Commission” was created, which reported that over 300 agents of the Brazilian military had committed human rights violations, none of those people faced any repercussions. Then President Dilma Rousseff said she was against the “persecution” of military criminals.

Today, Bolsonaro raises the spectre of communism again, but in circumstances vastly different than those of the 60’s. There is no Cuban revolution, and no mass mobilizations of peasants or workers—in short, no communist threat. It echoes Trump’s statement in his State of the Union speech: “The United States will never be a socialist country.” The goal of this maneuver in Brazil is to paint opposition, and particularly the Workers Party red, despite their years of capitalist leadership of the country, guaranteeing massive capitalist profits. But Bolsonaro’s follows go further, putting forward a kind of anti-communist hysteria, accusing right wing TV station Rede Globo—as well as The Economist and neoliberal thinking Francis Fukuyama—of promoting communism. Nationally, this strengthens the anti-establishment persona of Bolsonaro and is meant to weaken the Workers Party, the labor unions and most importantly, resistance to the austerity measures that Bolsonaro seeks to implement, such cuts to pensions.

On an international scale, the move is meant to strengthen a Latin American right wing, united in support of the coup in Venezuela and of right wing, pro imperialist neoliberal governments around Latin America.  “Anti-communism” for Bolsonaro, as well as for Trump means supporting the neoliberal and undemocratic coup by the US and Juan Guiado. It means calling Venezuela “communist”, painting communism as dictatorial regimes of economic misery, even though neither Chavez nor Maduro expropriated the capitalists in Venezuela.

As leftists in the U.S., one of our central tasks is to organize against U.S. actions that strengthen the international right wing, such as the coup in Venezuela. And this Sunday, as Brazil remembers the rise of their U.S.-backed military dictatorship, it is central for leftists in the U.S. to commit to fighting against U.S. intervention, which has resulted in the deaths of tens of thousands of people across Latin America.

In Brazil, many leftists are demanding punishment of those responsible for the coup and those who perpetrated atrocities during the dictatorship.

As many activists say, “We will neither forgive or forget.”