Brazil is a new epicenter in the worldwide coronavirus pandemic. The death toll has doubled in only the last two weeks, reaching more than 30,000. Not coincidentally, the country is led by the world’s foremost coronavirus denier: Jair Bolsonaro. 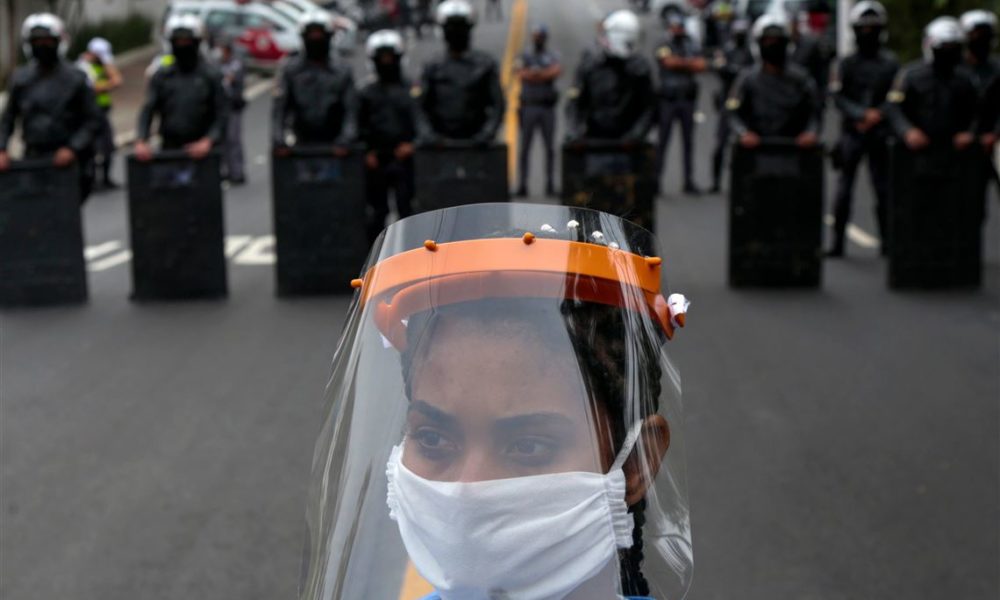 In the last two weeks, the number of deaths from coronavirus in Brazil has doubled, reaching 30,000. Brazil has jumped from eleventh place to second in Covid-19, behind only the United States. On May 1, the country reported around 5,000 cases. Today the total stands at over half a million. Since testing rates in Brazil still lag far behind those of other countries, we must assume the real count to be far higher. By some estimates, Brazil will reach between 82,000 and 163,000 deaths before the end of July. In the face of this quickly mounting death toll, Brazilian president Jair Bolsonaro has not taken any serious measures to stem the spread of the virus. In fact, he has done just the opposite.

Bolsonaro continues to dismiss attempts to contain the pandemic as “hysteria” and calls for Brazilians to resist quarantine measures. He has attended massive public rallies in favor of reopening the Brazilian economy. He has fired one health minister, compelled his replacement to resign, and finally filled the position with a military general with no public health experience at all. Asked by a journalist about the deepening Coronavirus crisis, Bolsonaro replied: “So what? What do you want me to do about it?” He continued, “We all mourn the lives lost, but it’s the natural course of life.”

The only explanation for such an irrational response is the most disturbing one: the spread of coronavirus in Brazil is part of a conscious policy by the Bolsonaro government.

Bolsonaro and his far-right clique understand well that it will not be the country’s capitalists, nor even its middle class, who suffer most from the virus. These sectors have the ability to shelter in place and to continue earning an income without exposure. When infections do occur among the most affluent sectors, they will be able to access quality treatment. It will not be these layers, therefore, that shoulder the heaviest burden of the pandemic. Rather, it will be the poor and precariously employed, the Afro-Brazilian community, the indigenous, the elderly — in short, the expendable sectors of society.

Like in the United States, Black people in Brazil are subject to a systematic campaign of violence and repression — a campaign that did not begin with Bolsonaro but intensified under his administration. On May 20, five days before George Floyd was killed by Minneapolis police, Brazilian police murdered João Pedro, a 14-year-old Black boy, playing in his own backyard. Less than 48 hours later, police killed 18-year-old João Vitor, a young Black resident of the Cidade de Deus favela, who was out buying a kite. Hundreds more Black Brazilians are killed each year by the police and paramilitary forces linked to the state and the Bolsonaro regime. In only the city of Rio de Janeiro, police carried out a record 1,814 extrajudicial killings last year.

In Bosonaro’s war on Black Brazilians, the weapons are not limited to police guns— he is using the pandemic itself. Afro-Brazilians, who for centuries have been the most oppressed and exploited sector of society, are now suffering higher rates of coronavirus infection as a result of crowded housing, lack of clean water access, and extreme poverty, which obliges them to continue working despite the contagion. As a result, Black Brazilians are far more likely to die of Covid-19. In the country’s largest city, São Paulo, Blacks face a mortality rate more than 60 percent higher than whites. Inferior health care, substandard living conditions, and overwork are all “preexisting conditions” for the Black community that exacerbate the effects of Covid-19.

Early in his political career, Bolsonaro said “It’s a shame that the Brazilian cavalry wasn’t as efficient as the Americans, who exterminated the Indians.” With indigenous people becoming infected at alarmingly high rates, Bolsonaro may have found a way to carry out his genocidal designs. The state of Amazonas, which a majority of Brazil’s indigenous people call home, reports an infection rate of 50 cases per 100,000 residents (again the true number is surely much higher) compared to 16 per 100,000 residents in the state of São Paulo and 30 cases per 100,000 in the state of Rio de Janeiro. The mortality rate of 12.6 percent among indigenous people is double that of Brazilians as a whole. Even when tests are available, which is rare, indigenous communities generally do not have ICUs or the necessary medical equipment to treat Covid-19 patients.

The deaths of indigenous people is clearing the way for further incursions into their territory by agribusiness and the logging and mining industries. In the midst of a pandemic ravaging their communities, Bolsonaro has promoted new legislation that allows for the exploitation of hundreds of thousands of hectares of indigenous lands. As a result, the rates of deforestation have increased dramatically. Together with the massive burnings of the Amazon that occurred in 2019, the coronavirus outbreak in the indigenous community serves the strategic interests of the Bolsonaro regime and its allies.

The words and actions of the Brazilian President and his allies make clear that a central objective of his coronavirus denialism is the slaughter of indigenous people and the looting of their protected lands. During Bolsonaro’s first year in office, murders of indigenous leaders rose to an 11-year high. “Where there is Indigenous land,” Bolsonaro has said, “there is wealth underneath it.” Minister of Education Abraham Weintraub stated recently “’indigenous peoples,’ I hate that term […] There is only one people in this country. It is a Brazilian people […] End this business of peoples and privileges.” Privileges for Weintraub of course means the right to hold on to the lands they have called home for centuries.

These are not the only communities under attack, however. The poor and the elderly are also in the crosshairs of the Bolsonaro government. According to one source, a top aide to Bolsonaro admitted “It’s good that deaths are concentrated among the old. That will improve our economic performance as it will reduce our pension deficit.” The sectors of Brazilian society considered superfluous by capital — retirees, workers in the informal sector, and the unemployed — are those most affected by the pandemic. These Brazilians receive the most inadequate health care and live in the most unsafe conditions. Those who do work receive the least protective equipment on the job.

Bolsonaro is carrying out nothing less than a genocidal campaign on Brazil’s most oppressed people. Defeating his plans requires the broadest unity and solidarity with Afro-Brazilians, indigenous people, and the poor.