19 immigrants were murdered. These murders further confirm the United States´ policy of implementing racial violence against African Americans and Mexicans. 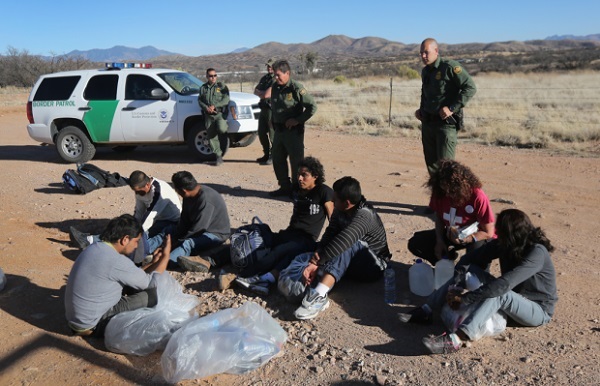 Of the 67 border related shootings resulting in 19 deaths, several of them minors, the Border Patrol justified the violence used in 64 of the cases. The three remaining are still under investigation.

Among the cases, is the murder of a 15 year-old Mexican boy, who died after a Border Patrol agent shot him in the face with the excuse that the boy had thrown stones at him from the border bridge in El Paso, in 2010.

In 2011, another agent shot a 17 year-old Mexican youth who threw stones from the Mexican side of the border wall, near Walnuts, Arizona. The young man also died.

Even Americans are not safe from the Border Patrol brutality. In 2011, an agent shot a 19 year old citizen from United States near Douglas, Arizona.

These cases took place between 2010 and 2012. Sixty four Border Patrol agents used taser guns and shot at the backs of immigrants and, in some cases, Americans.

The hypocrisy of the Obama administration is clear: how can the institution investigate itself over the border shootings?

What’s even worse is that nobody has been held accountable for these murders that were committed by the repressive American forces against the immigrants. This adds to the long list of violence and the criminalization of those who go to United States in search of a better life, who are fleeing from the misery and the violence of their home countries.

Meanwhile, Obama pushed for DACA – a programs that benefits those who arrived in the United States as minors – and DAPA – which protects undocumented parents of citizens and legal permanent residents from deportation as long as they don’t have a criminal record and they have been in the United States since January 1 2011. However, these programs have been put on hold due to a number of governors taking legal actions in order to tie the programs up in court.

These executive measures would stop the deportations of around 5 million undocumented immigrants, but another 6 million would still be subjected to being deported by the US. At the same time, Obama already holds the record for the greatest number of deportations during his two terms as president. What he gives with one hand, he takes away with the other.

This is on top of the hostility of Donald Trump’s declarations against Mexicans, the xenophobia expressed by the republican party and the police brutality against the Latin community, like in the case of Erik Sánchez, a Mexican youth killed by the police in his own home.

On June 18 in waters of Encinita, California a Mexican woman died in a boat accident when a small boat carrying 20 people crashed with a Border Patrol boat.

The Office of Customs and Border Protection stated that “that the agents ordered the captain of the boat to stop, and they fired warning shots, but the captin didn’t obey the order and the ships collided”, he informed The Jornada newspaper. Clearly a dubious action.

In Mexico, in 2014, after the great increase in unaccompanied minors migrating to the US and a push from the Obama administration, Enrique Peña Nieto implemented the Plan Frontera Sur, which basically consists of impeding, by all possible means, the traffic of immigrants from Mexico to the United States.

This plan forces immigrants to pass through more dangerous places, throwing them into the hands of the drug and human traffic rings. Kidnappings, extortions, obligation of working for the drug dealer in exchange for their lives, rapes, prostitution, tortures, an inevitable death, is what awaits many immigrants, men, women, and children.

According to Amnesty International, in 2014 there were 682 accusations of immigrant kidnappings, and it is expected that this figure has increased this year.

And to those that make it to the United States border, more obstacles await them: avoiding the Border Patrol and the wall, and most likely the need to travel through the desert. Without food and water, many die along the way.

Oppression as a tool of Capital

The violence that immigrants are subjected to serves a purpose: by keeping them submissive, they’re more willing to accept horrible working conditions and low pay.

But not only that: the poor labor conditions that foreigners and Afro-Americans are subjected to in the US, allows US companies to impose lower working conditions on American workers..

Which group proposes more of a threat for the democrats and the republicans? There alliance between the Latinos and Afro-American communities that arose in the 1970s could form once again, after the numerous attacks that both communities have faced.

Today, in spite of the dominant classes´ attempt to create divisions and alienate the working class, there are examples of struggle and solidarity like the marches for the 43 Normalistas from Ayotzinapa, the mobilizations in support to the immigrants in the U.S., and the common struggle between Afro-Americans and Latinos for the increase in the minimum wage to 15 dollars an hour.

It is necessary to further develop this alliance that will strengthen the working class and the multiethnic youth in the United States.