Boston Starbucks Workers Go on Strike Against Union-Busting and Bigotry

Workers at the newly unionized Starbucks store on Commonwealth Avenue in Boston, Massachusetts are on strike indefinitely to protest the company’s union-busting and harassment, and intimidation from their manager. 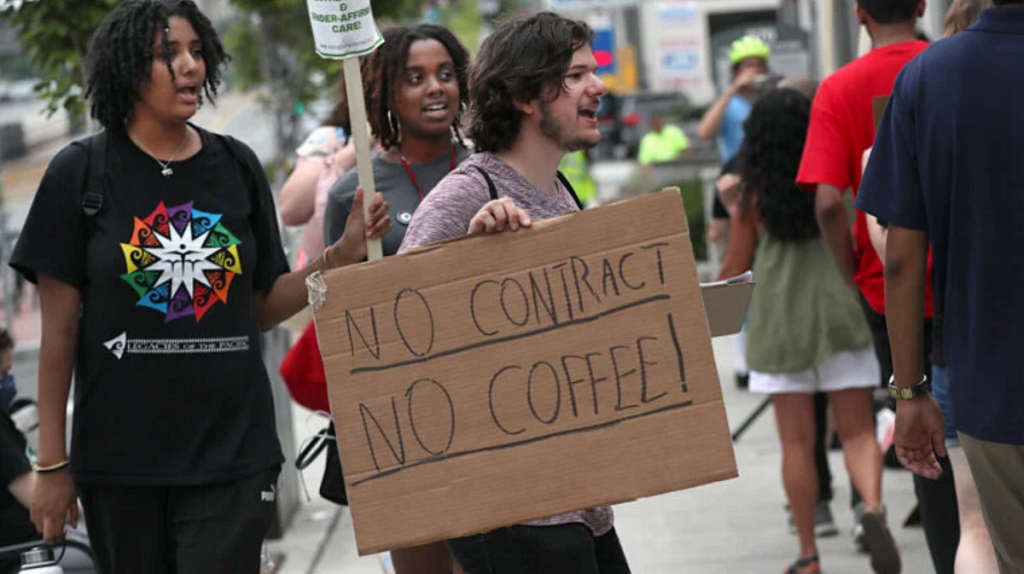 Unionized Starbucks workers at the 874 Commonwealth Avenue location in Boston, Massachusetts are on strike indefinitely, demanding guaranteed hours, adequate staffing, and the removal of a store manager who has created a “chaotic and hostile work environment,” including making racist and homophobic comments against staff and customers.

The store, which is located on the main thoroughfare of Boston University’s campus and services many of its students and staff, has been shut down since July 18; workers and their supporters have been picketing each day outside the store even as an intense heat wave strikes much of the country. They say they will prevent any deliveries from coming to the store. In response, Teamsters local 25 is refusing to make deliveries to the store in solidarity with the strike.

Workers voted unanimously to unionize the cafe in June, 10 to 0. Now, just a month later, they are flexing their muscles and exercising their collective power to fight for better working conditions, against company retaliation, and against bigoted attacks on their coworkers and community. They say they won’t go back to work until the company bargains in good faith over their demands.

Just after the successful union vote, Starbucks hired a new manager to oversee the store. Workers have since been subject to a slew of unfair labor practices and harassment, including “harmful and offensive rhetoric with respect to the race, gender, and orientation” of employees as well as customers. As a result, the union is demanding that the manager be removed from the store permanently.

Workers further report that the new manager immediately began cutting hours for new and veteran workers alike, while at the same time demanding that workers be available outside their regular hours because the store is woefully understaffed. Those who refused to comply with the new policies have been threatened with disciplinary measures or termination. These textbook union-busting tactics are meant to divide workers and prevent interaction at the workplace, on top of attempting to increase competition for hours and threaten workers’ income.

One barista, Taylor Dickerson, said her hours were cut nearly in half this summer. “Not only does this make it difficult to pay bills but it hurts the store as it is often grossly understaffed, affecting our sales, cleanliness, and morale … This response feels like a direct punishment for unionizing.”

In going on strike, the workers are sending a clear message to Starbucks that they see these attacks for what they are: yet another union-busting tactic by the company, one of countless other retaliatory actions taken across the country meant to demoralize the new unions and discourage other potential union efforts. Their fight is larger than one manager; it is against all the “unfair labor practices on the local and national level (including threats, overly restrictive policies, denials of benefits, changes in operations, and other alleged violations).”

But in taking on this fight against Starbucks’ union-busting crusade, the unionized workers striking on Commonwealth Avenue have many potential allies.

In Massachusetts alone, 14 stores have unionized or in the process of voting. Nationwide, as of mid-July, workers at over 300 stores in 36 states have filed to unionize as part of the union wave overtaking the largest coffee chain in the world; of those stores, nearly 200 have already won union elections, and elections are underway or coming soon at hundreds more.

Starbucks workers across the country face many of the same deplorable conditions at the hands of a company that made record profits last year. In unionizing, they are taking a stand and showing a willingness to use the most powerful tool at their disposal — the strike — to fight back against the bosses’ attacks and to fight to improve their conditions

And as the Boston workers’ struggle shows, these new unions are also fighting against bigotry and oppression, taking up the struggle against racist and queerphobic attacks on workers and community members, from threats on trans-inclusive healthcare to harassment on the job. And it wouldn’t be the first time that Starbucks workers successfully stood up to harassment in the workplace: Workers at the first unionized Starbucks in Chile launched a campaign to fire a manager who sexually-harassed employees and forced the company to fire him.

The determination of the Boston workers to stay on the picket lines is a powerful example of the potential of the union movement sweeping Starbucks locations and many other sectors across the United States. Imagine if the other unionized Starbucks locations in Massachusetts went on strike in solidarity with their siblings on Commonwealth Avenue until the manager is removed and their other demands are met. Or if all the unionized locations in the United States joined together to protest Starbucks’ anti-union tactics, from retaliatory firings to store closures.

This would send a clear message to Howard Schultz and all those who profit off of Starbucks’ exploitation of its workers that all attempts to stamp out the movement by isolating individual stores and trying to punish union organizers will not succeed. These attacks only train these new unions how to fight for their interests together. And in doing so, these struggles can lay the foundation for a strong movement that could fight, not just for individual contracts, but against all attacks by the company and for better working and living conditions for Starbucks workers across the country.