Brazil After the Coup: Austerity, Attacks and Scandals

After the right-wing coup, the government has intensified attacks against the working class. Scandals and plummeting popularity has not stopped these attacks from coming. What can be done to resist and defeat the Temer government? The following interview with Leandro Lanfredi, Editor of Esquerda Diario, the largest left publication in Brazil, will begin to answer these questions. 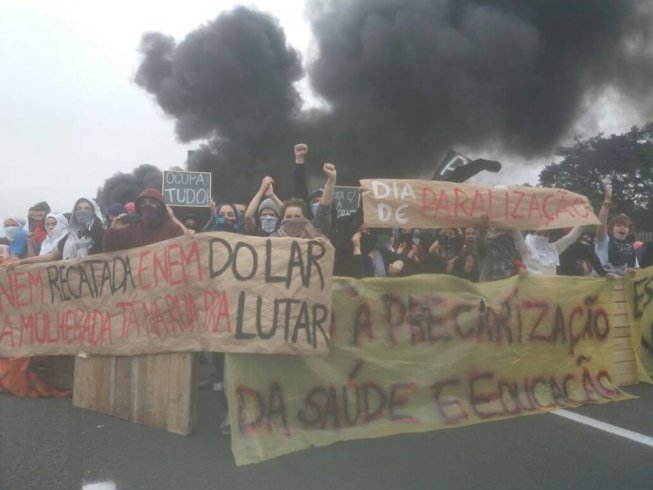 What have the first six months of the Temer putschist government been like?

The first six months of the post-coup government of Michel Temer have been marked by a wide range of attacks against working people. Notably, it has led the way in changing the constitution to freeze government spending for the next 20 years. This freeze will affect public education and health for a generation to come. This initiative, known as PEC 55, was proposed by the Temer government and approved by the right-wing parliament.

Temer has also proposed a reform in the retirement system that will make an average Brazilian work 17 years longer to earn full retirement, or ten years longer even to be eligible for retirement. Further, there have been plans to change the labor laws, so that workers would be forced to work up to 12-hour days. The law also increases flexibilization and makes it easier for companies to fire workers. These initiatives are obviously intended to help the billionaires and big business — not the working class.

Temer has been praised by the wealthy elite even though he has been a target of criticism for taking too long to implement these austerity measures. The Temer government is enmeshed in important contradictions. On the one hand, Temer has the support of the majority of parliament. On the other hand, however, he is one of the most unpopular presidents ever according to public opinion polls, with only an 8% approval rating. Even while undergoing an impeachment process, Dilma — Temer’s predecessor — never polled that low.

It is therefore quite a complex situation because those attacks have not changed a general balance of forces that started in 2013 with the massive June protests, in which a large sector of the population rose up against the hikes in bus fares and began to question the government. Yet, there are very significant government attacks on the working class. If those [legislative] attacks on labor, like the pension and labor-law reforms [are pushed through], there might be a change in the balance of forces. It remains to be seen whether such a change is possible.

The bourgeoisie wants Temer to attack the working class, which he is doing — but not as quickly or as intensely as they want. At the same time that public support is dwindling, the judiciary is threatening to prosecute him for alleged corruption schemes. Most notably, the charges against him include allegedly receiving a payout of over 10 million reals, nearly $3.3 million, from Odebrecht [ed. note: a major Brazilian construction company] and other companies.

At the same time there is little resistance on the part of the unions. They criticize Temer’s [anti-labor] attacks on the web , but there is no call for a general strike or real resistance. Even though people dislike what the Temer government is doing, nothing has been organized by the unions .

What happened in the Brazilian midterm elections?

The midterm elections revealed important political changes. The PT [the Workers’ Party] suffered a major blow in the elections and went from having the second-largest number of mayoral seats in the country to around the eighth. Only one city with over 200,000 inhabitants is now run by the PT. In the past, the PT had around 20 cities under its influence.

There were large numbers of people, nearly 40%, who didn’t vote or submitted blank votes in the midterm elections. This is uncommonly high for Brazil, where the vote is mandatory. Some right-wing candidates were victorious in this election, but they weren’t victorious by honestly proclaiming their true political ideology. Rather, they argued that they were above politics, emphasizing their expertise as businessmen and entrepreneurs. However, these newly-elected right-wing political figures will have difficulties going forward because they have been hiding their real programs of anti-worker austerity behind a lot of demagoguery.

What have been the consequences of the political situation for the Brazilian people?

The growing unemployment has created a dire situation. Nearly 13% of the population is currently unemployed. Wages are falling. People are buying fewer consumer goods because they are deeply indebted. In addition, states like Rio Grande do Sul in the south of the country and Rio de Janeiro are going bankrupt and cannot pay the salaries of their public workers.

At the same time, there are major “reforms” imposed by the Temer government, such as the pension reform and changes in work laws, creating jobs similar to Walmart jobs in the United States. So they want to “modernize” and become more like the U.S., or Germany, or Korea or Mexico. But this means simply that they want to increase the exploitation of the workforce in order to increase profits. As a result, the lives of working class people in Brazil are getting more difficult, and there is growing discontent. This discontent has not yet become manifested in widespread resistance in the streets and workplaces. However, it is evident in public polls and social media. Unfortunately, thanks in large part to the role played by the labor bureaucracy, workers have not yet waged a real class struggle.

How did the US influence these events?

The United States influenced these events in an indirect way. While Obama or the State department did not openly call for the ousting of Dilma, there is evidence that Sergio Moro and the prosecutors in the judicial process [against Dilma] were aided by the U.S. In fact, they spent a year receiving training by the CIA at Langley. Moreover, documents published by Wikileaks provide proof of meetings in which the U.S. showed its support of Moro.

Around the time of the coup, judges worked against the PT, but they threatened to also move against other parties. Although it did not happen, the threat was that the judicial branch would engage in a ‘clean hands’ operation, as occurred in Italy in the ‘90s.

In addition to the U.S. influencing the judicial system in Brazil, there is now a new threat. Since Trump was elected, the bourgeoisie has changed its tone with Temer, and the pressure to intensify the attacks on workers has increased tremendously. This shift can be observed by reading newspaper editorials, which have changed their tenor nearly overnight. It seems clear that even if Trump carries out only one-tenth of what he promised, his policies will have major effects on world commerce, especially the price of commodities. Since Brazil’s economy depends on commodity exports, it will suffer from a drop in prices, which explains the bourgeoisie’s urgent calls for more austerity.

So there are two ways in which U.S. is exercising its influence. One is by putting pressure on the judicial system to implement what the U.S. would like. In order for this to work, it is not necessary for a judge to be on the U.S. payroll but merely for them to compelled to work for the interests of the U.S. The other means by which it has influence over what is happening in Brazil, and which will play an even larger role once Trump is in office, is monetary pressure, or changes in monetary policies. Such changes will, in turn, put pressure on Temer to act quickly so that the bourgeoisie can recover their profits before the international situation worsens for them.

How have the people fought back against the putschist government?

The most important role in the resistance against the Temer government has been played by the youth. Over 1,000 schools and universities were taken over by the students in recent months in protest against the PEC 55 law. While the measure was being debated in Congress, there was a lot of repression against protesters.

There were a couple of days of protest called by the labor unions, but they were not voted on in workers’ assemblies, nor were they organized to mobilize the majority of the workers in those unions. These half-hearted mobilizations are meant as a show of discontent, but the labor bureaucracy does not put up a real fight to stop the austerity measures. They embody the perspective of former-President Lula, who said that we must resist but we must not set the country in flames. The labor unions call for protests but stop short of calling for a major fightback against the bourgeoisie, the state, and Temer’s measures. They don’t call for a general strike based in assemblies in the workplace and democratic worker organizations. To summarize, there is a lot of discontent but, thanks to the labor bureaucracy, little active resistance that can defeat the austerity measures.

What is needed in order to defeat the Temer government and their cuts?

To challenge the cuts of the putschist government, what is needed is a united front of the unions and social movements. In order to defeat the attacks, the two primary union federations, which are both aligned with the PT, must be challenged and forced to take part in a real united front. To make this happen, the PSOL’s parliamentary figures, [PSOL is an opposition party to the left of the PT which has several well-known political figures] and the few unions not aligned with PT should demand that the major unions organize a real active strike and a plan of action, to make that united front work. PSOL’s parliamentary figures, small unions not aligned with PT, and social movements like MTST (roofless workers movement), should make demands of the PT-controlled unions, not applaud them. These groups should demand real actions from the country’s largest labor unions, so that we could have a real united front to challenge those attacks.

By organizing such a force we could start offering real solutions, to move from a defensive perspective to an offensive perspective. There is a major political crisis in the country and increasingly, there are editorials in mainstream newspapers questioning whether it’s better to proceed with new general elections and have a new president anointed or appointed, like a king, to have credibility to carry out those attacks. And most of the Left in Brazil, agrees and supports new elections as a political solution.

We think that will only give credibility to those attacking us and won’t help challenge this political system in crisis. And that’s why we fight for a new constitutional assembly, which could put in motion a force to pass from the defensive perspective to a more offensive one, which for us is to fight for an anti-capitalist workers’ government. But as long as the workers do not agree with that perspective, we find it necessary to fight for the the most generous bourgeoisie democracy, which would mean a general assembly ending all the privileges of the judicial system and of the politicians, rejecting the payment of the international debt, which represents over 50% of the national budget, and nationalizing, under workers’ control, all privatized companies. There is a lot of discontent — we can defeat the government but to do that we must act differently than the way that the major unions are acting now. The Left must have a fighting perspective for a real united front, more than the theatrical days of protest with no real impact on the economy.