Over 50,000 people have died of Covid-19 in Brazil and well over one million people have been infected. As cases climb, the country is re-opening. 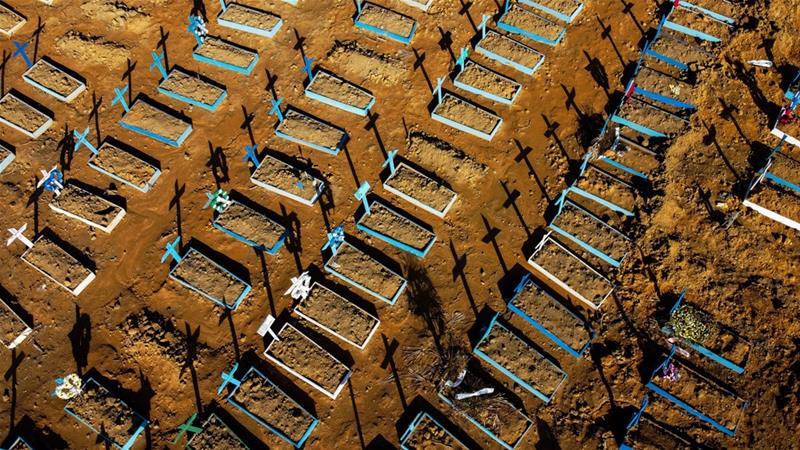 Brazil surpassed the milestone of 50,000 coronavirus deaths on Sunday after registering 632 deaths a day over 50,608 new cases. This has occurred just over three months since the first death was confirmed in the country, according to official data from regional health officials.

Brazil is in the midst of a deep political and public health crisis, with more than 1 million people infected — their deaths are the direct responsibility of President Jair Bolsonaro’s ultra-right-wing government, as well as of the “opposition” governors. Sunday also saw new demonstrations in various cities around the country.

This week, Brazil registered five consecutive days above 1,000 deaths, placing the country second in the world both in number of victims and infections, behind only the United States.

The figures show that the virus continues to advance rapidly in the country even though specialists warn that the pandemic has not yet reached its peak.

Despite the alarming number of deaths, Bolsonaro did not comment on the figures. His only social media post of the day was a tribute to a Brazilian soldier who died after a parachute jump.

“Worse than the pain of defeat is the shame for not having fought. Our mission is to defend the Homeland, our freedom and the interests of our people,” wrote the far-right leader on Twitter, after traveling to Rio de Janeiro on Sunday to attend the soldier’s funeral.

According to data from the country’s 27 regional health secretaries, São Paulo, Brazil’s most populous state and home to nearly 46 million people, continues to be the epicenter of the disease, with 12,588 deaths and nearly 220,000 confirmed cases of Covid-19.

In Brazil’s impoverished Northeast, a serious crisis faces the state of Ceará, which has suffered 5,523 deaths and which, within the next few days, could overtake Rio de Janeiro’s number of infected.

Meanwhile, several Brazilian cities and states began a gradual reopening of the economy in early June, but many municipalities backtracked this week due to the rapid rate of spread of the virus.

The effects of coronavirus in Brazil are greatly exacerbated by the country’s extreme inequality. Because of the growing precariousness of labor conditions and a weakened public health system, it is the working class that has paid the highest price for the crisis.

The lack of policies to combat the crisis is a direct result of the government’s commitment to maintaining the profits of Brazil’s biggest capitalists. As the country reaches new records in deaths and infections, Bolsonaro and his finance minister, Paulo Guedes, continue to direct billions toward rescuing the banks. The governors, who have tried to appear as a more rational “opposition” to Bolsonaro, have also opened their regional economies, showing that their priority was never to fight the spread of the virus but to save big business.

Without the objective of obtaining more tests and beds when the peak of contagion was not yet reached, Bolsonaro and the governors continue with their murderous policy against the sectors most affected by the social effects of the current crisis. Marked by the lack of measures to combat the health crisis, this policy is also aggravated by the intensification of attacks against the rights of the working class.

In this framework, health workers who have been at the forefront of the fight against the coronavirus demonstrated again this Sunday demanding better working conditions and denouncing the way the state has been handling this crisis, through Bolsonaro and the governors.

Brazil also ranks first in the number of deaths among health workers, according to their unions. In addition, underreporting of infections could mean an even more alarming condition for the development of the pandemic in the country.

Rallies and demonstrations against the government took place this past week in cities throughout the country, including São Paulo, Rio de Janeiro, Brasília, Belo Horizonte, and others, along with many online and social media actions.