On Christmas night, two men were drunkenly urinating outside the Sao Paulo metro when a homeless trans woman let them know that there was a restroom in the station. 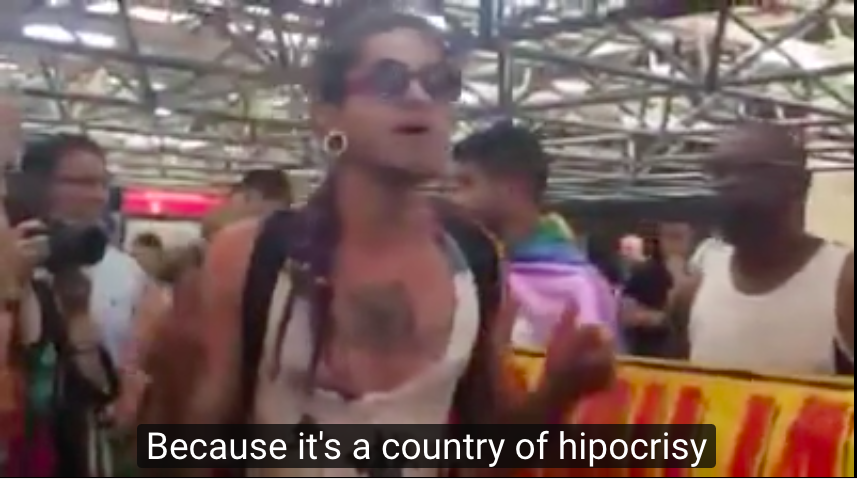 On Christmas night, two men were drunkenly urinating outside the Sao Paulo metro when a homeless trans woman let them know that there was a restroom in the station. The men began to physically assault her when street vendor, Luis Carlos Ruas, stepped in to stop them. The trans woman was chased into the metro station and was able to escape her aggressors. Then the men came back and beat Luis, the street vendor, to death.

The following speech with Virginia Guitzel (Interviewed by Left Voice here ), a trans public health worker who lives in Santo Andre, Sao Paulo, was made at a protest against this horrific event.

[There is a] … responsibility for the crimes of homo and transphobia that happen everyday in our country. Brazil is the country of transfeminicide. The country that kills the most trans women in the whole world. And it’s also the country with the largest number of searches for trans pornography. Because it’s a country of hipocrisy. Because we look at the national Congress, and you can see – the “secular government” is done, the church is one with the state. The evangelicals are always reminding us, they want to persecute and they want to kill us.

It’s important to remember that the fight against homo and transphobia is a fight that begins by questioning the state. Who are these coup leaders occupying our government that want to take away rights from the working class? They want to take away our right of having a dignified living, they want to take away our social security. Trans women are in their majority in prostitution, and when someone tries to help us, they get what happened to Luis.

And that’s what we see. Transphobia doesn’t just kill trans women. Not just trans people. Not just trans men. It kills their family, their partners and those who help us. That’s why this isn’t a lone fight for trans people. LGBT people, we need to fight together, against this whole system. Against capitalism, against the relationship between church and state, it’s a class conflict.

It’s a fight against the manipulative media, the media that’s here today who supported the coup, who supports the murders…

Us, the trans community, are not statistics. We are a powerful force to break this system DOWN.”