Workers in Brazil are fighting RR Donnelley’s claim that they are bankrupt and can’t pay severance packages. 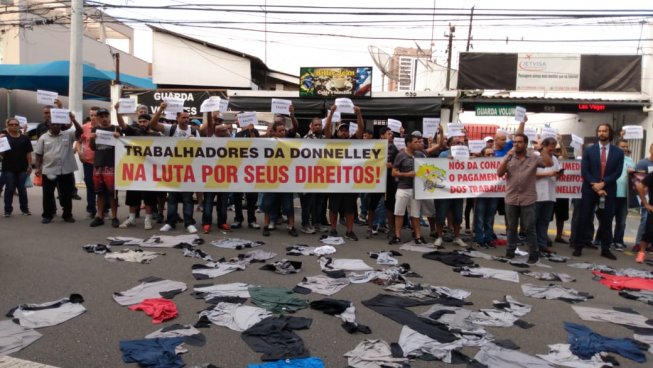 RR Donnelley is a Fortune 500 American multinational and market leader in commercial printing worldwide, with a yearly revenue of over $6 billion. Despite this, the company filed for bankruptcy and closed three plants in Brazil, leaving almost a thousand people out of work with no severance rights.

The American giant, with operations in several countries, had three plants in Brazil with about 300 workers in each. Among its clients were the Brazilian federal government, with which it signed multimillion-dollar contracts to print, among other materials, Brazil’s nationwide standardized test for high schoolers (ENEM), which serves as an admissions criterion for Brazilian public universities. Twice a year, RR Donnelley’s plants print a new edition of the test for over 4 million students. Due to such security concerns, workers were routinely submitted to humiliating frisk searches upon arriving and leaving work. Meanwhile, suspicions have surfaced over fraud in the public bidding procedures that secured the government contracts to print tests over the last 10 years. Additionally, contracts with clients like Brazil’s Bradesco bank and Royal Dutch Shell earn the company millions.

Despite these massive profits, RR Donnelley’s Brazilian subsidiary claimed bankruptcy and issued a letter to workers forbidding them from returning to the plants even to collect personal belongings, citing “security concerns,” over classified information about the tests that those same workers printed year after year.

RR Donnelley has claimed bankruptcy at the instruction of its lawyers—one of the most expensive law firms in Brazil—as a legal maneuver to avoid paying the benefits it owes workers, some of whom have been at the company for over 30 years. They claim that they do not have enough funds to cover the cost of employees’ legally protected severance rights.

Consequently, RR Donnelley workers in Brazil have been staging various demonstrations since Tuesday. They set up a partial roadblock on the highway in front of the main plant lasting two days, and on Friday workers went to an American consulate to protest the imperialist corporation that exploits their work to send millions in profits to its shareholders abroad, and now shuts its doors, leaving hundreds of families destitute and refusing to honor workers’ rights to severance pay.

This comes at a time of harsh attacks on Brazilian workers, after a law passed rolling back employee rights and regulations that protected worker pay and safety, allowing for an unprecedented expansion of precarious work. Additionally, the far-right administration of President Jair Bolsonaro seeks to pass a pension reform law that will strip workers of their retirement. Under these circumstances, workers are likely to be laid off and lose their benefits at other U.S. companies operating in Brazil, like GM and Ford.

Through Esquerda Diário, a socialist website that is part of the same international news network as Left Voice, and the University of São Paulo’s staff union (Brazil’s largest public university), workers and students have extended solidarity and raised awareness of the absurd conditions faced by the workers and the struggle for their rights.

In Argentina, when RR Donnelley tried to close its doors in 2014, workers occupied the plant and put it under worker control. The factory is now called MadyGraf, named after the child of one of the workers, and continues to produce under worker control. The MadyGraf women’s commission and the workers of the occupied factory sent a video and a letter expressing their solidarity with their colleagues in Brazil.

In Argentina, the RR Donnelley union was led by rank and file socialists, who when the factory was shut down, fought to put the factory under worker control, blocking major highways and fighting off the police. On the other hand, the union RR Donnelley in Brazil is demands a severance package– and isn’t putting up much of a fight even for that. In Brazil, as elsewhere, we have seen major union apparatuses taking hold of the labor movement and stifling workers’ struggles, holding them back from reaching their potential.

In this sense, the role of socialists in the unions is essential, as well as the national and international solidarity for struggles such as this one.