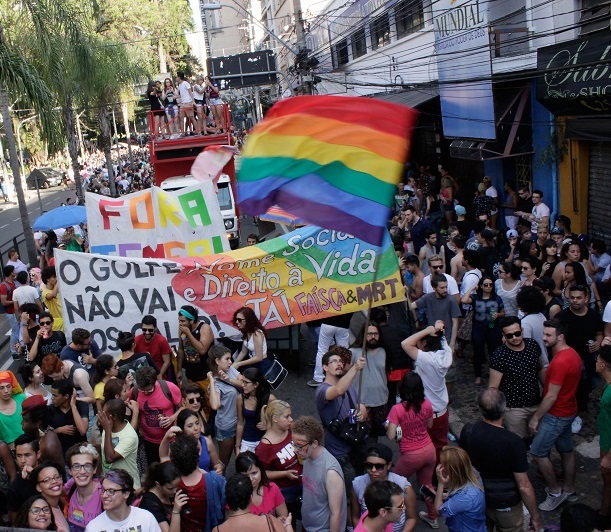 This week, a Brazilian federal court issued an injunction allowing psychologists to provide gay and lesbian conversion therapy, which seeks to cure gay, lesbian and bisexual people and impose heterosexuality as the only sexuality possible. This overturned a resolution passed in 1999 by the Brazilian Federal Psychology Council that had forbidden the practice. The federal court allowing individual psychologists to pathologize homosexuality is the latest in a series of attacks and setbacks to LGBT rights in Brazil.

Brazil has a contradictory relationship to queer people. The Sao Paulo Pride Parade is the world’s largest. One of the biggest names in Brazilian pop music is Pablo Vitar is a drag queen who performed in front of thousands of people at Rock and Rio next to Fergie. In major cities, it is quite common to see LGBT couples holding hands and kissing in public.

Yet, it is one of the countries with the highest rates of homophobic and transphobic violence in the world. An average of almost one murder of an LGBT person taked place every day in Brazil, and that rate is rising. It should also be noted that and trans identities are still regarded as mental illnesses.

In 1922, the Bolsheviks were the first country to decriminalize and depathologize homosexuality. These resolutions were short lived, as Stalin quickly criminalized homosexuality again. In 1973, the American Psychological Association stated that homosexuality was not a mental illness. In 1990, the General Assembly of the World Health Organization followed suit. In 1999, a resolution by the Federal Psychology Council in Brazil followed suit, acknowledging that discrimination and stigmas aimed at certain sexual orientations were rooted in social prejudices and should be overcome.

The de-pathologization of homosexuality has received pushback before. In fact, in 2013, a member of Congress put forth a resolution that would treat homosexuality as a mental illness, sparking mass mobilizations in the streets. Congress was forced to table the measure that would modify the Federal Psychology Council’s position.

However, empowered by the rise of the right in the government, this year a group of psychologists aligned with the evangelical right issued legal action against the Federal Psychology Council. This resulted in an injunction passed down on Thursday against the ban on gay conversion therapy. According to the ruling, the resolution to not view homosexualiy as a mental illness is maintained, but the ban on gay conversion therapy has been lifted. In other words, each psychologist is free to use conversion therapy if they want to, treating homosexuality as an illness if that’s how they view it.

What is Conversion Therapy?

Conversion therapy, which has a long and nefarious history, continues to be practiced in many parts of the world. It may consist of psychoanalysis, hospitalization, aversion therapy, or even shock therapy. In the most extreme cases in history, people went so far as to get lobotomies to “cure” their homosexuality.

Esquerda Dário spoke to Bruna Falleiros of the Regional Psychology Council of São Paulo about the argument made by right wing psychologists. She said, “They claim that psychologists can’t help people who are unhappy with their sexual orientation if they want to avoid ethical malpractice lawsuits. However, when someone is unhappy with their sexual orientation, it is because of social and cultural bias, not because of a mental illness. It’s a social problem, not a reason for ‘sexual reorientation.’ …The scientific data shows that attempts at ‘conversion therapy’ have always been unsuccessful, increasing anxiety, depression, and suicidal thoughts.”

The conversion therapy decision came one week after an art exhibition in Porto Alegre, titled “Queermuseu,” (Queer Museum), was taken down in an egregious act of political censorship by the conservative right. A bill aiming to diminish women’s reproductive rights is also expected to pass Brazil’s Lower House of Congress this week. The Black community is also under attack. Aside from being the most hurt by austerity measures by the government, this week the National Congress also wants to reduce the age that Brazilians can be tried as an adult in court. This overwhelmingly targets Black Brazilians who are arrested and imprisoned at exorbitantly high rates. These are just recent examples of the attacks oppressed people face in the current Brazilian political context.

The LGBT community in Brazil is under attack like never before now that so many of its most vociferous enemies are in positions of power and able to carry out such attacks on our basic human rights. The orchestrators of the coup against former President Dilma Rousseff are deeply homophobic and these attitudes even expressed themselves in the vote to oust the Workers’ Party President. Many voted for the coup in the name of the traditional family, signalling the beginning of an era of relentless attacks on LGBT people. The courts played an essential role in the coup and now play an essential role in advancing a right wing agenda.

Since then, the conservative right has grown under Brazil’s long and deepening economic, political, and social crises. The new right wing presents itself as a novel alternative to the old delegitimized system. However, their policies fail to address the real factors causing injustice and only serve to exacerbate inequality and oppression.

Although the PT (Workers’ Party) paints itself in rainbows, former President Dilma refused to put up a fight to advance a law that would criminalize homophobia. Furthermore, she vetoed an “anti-homophobia kit” for schools that would include information about LGBT people. While she made her facebook profile a rainbow when marriage equality was passed in the US, she allowed Marcos Feliciano, a public figure who has never been shy about his homophobic and racist opinions, take up the post of “Director of Human Rights.” The PT was never very interested in guaranteeing rights for LGBT people but was quite invested in maintaining and increasing the profits of those who benefit from exploiting workers. During the years of the PT, as well as afterwards, LGBT people and especially trans people are relegated to the worst jobs with meager wages, particularly in telemarketing.

In 2013, Brazilians fought and won against a law that would pathologize homosexuality. It is time to take the streets once again. On Friday, there are protests organized around the country.

Esquerda Diário of the Left Voice International Network has put forward a massive campaign against this court order. The decision has sparked mass outrage against the increasingly conservative policies pushed by the Brazilian judicial, legislative, and executive branches, as well as concerns over the psychological violence involved in gay conversion therapy. 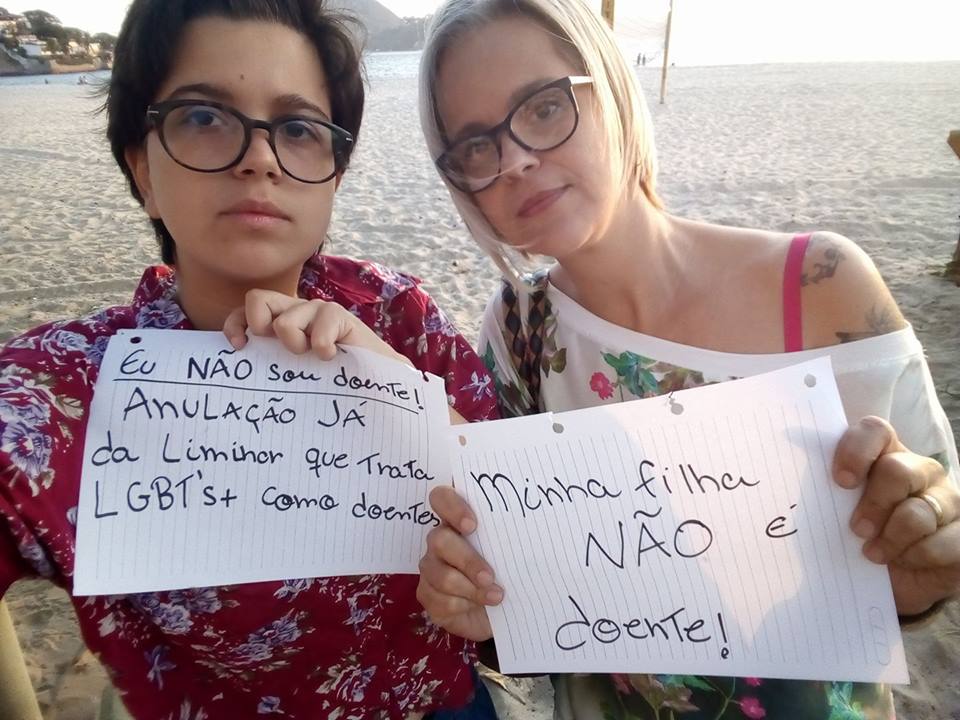 On the left: I am not ill. End the court order that treats LGBT people as sick people
On the right: My daughter is not ill. 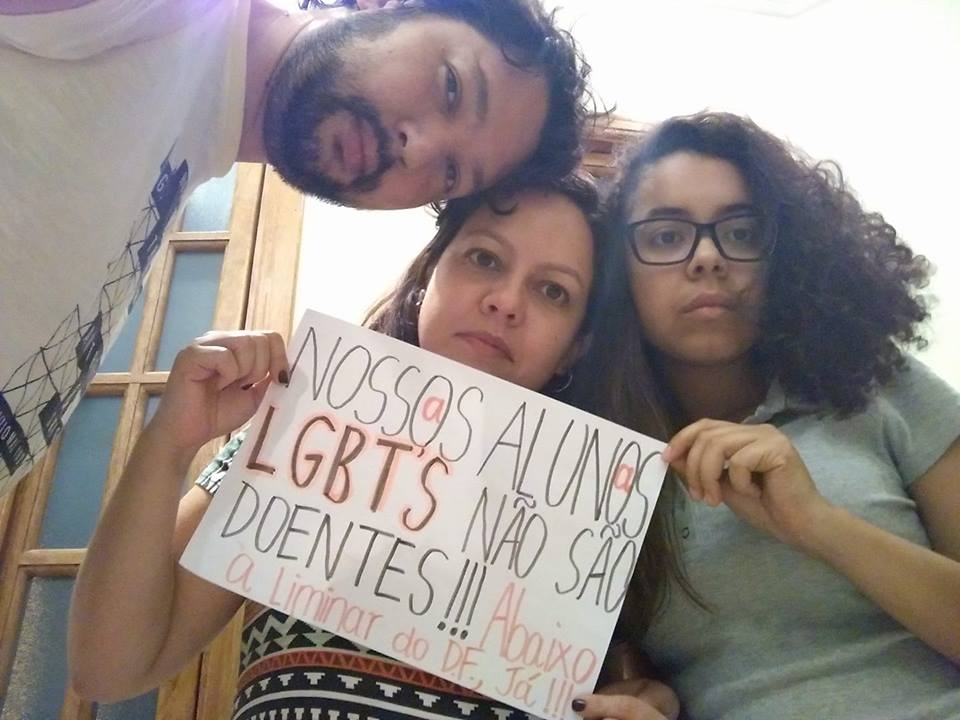 Teachers say Our LGBT students are not ill. End the court order that treats LGBT people as sick people. 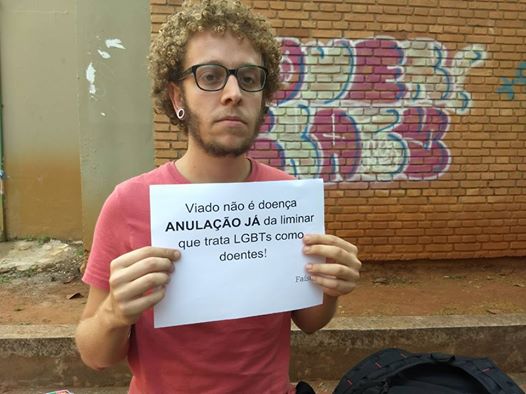 Being a fag doesn’t make me sick. End the court order that treats LGBT people as sick people.

Virginia Guitzel, of the Revolutionary Workers Movement in Brazil and the Bread and Roses women’s movement spoke about how the measure will hurt her as a bisexual trans woman. She says, “This action seeks to allow a form of torture of LGBT women by classifying us as mentally ill. This is another means of controlling our bodies, our identities, and our sexuality used by the capitalist state… We need to be on the front lines of the struggle against these attempts to undermine our most basic rights by reclaiming examples like Stonewall and reclaiming our methods of struggle in order to truly secure our sexual freedom alongside other working men and women.”