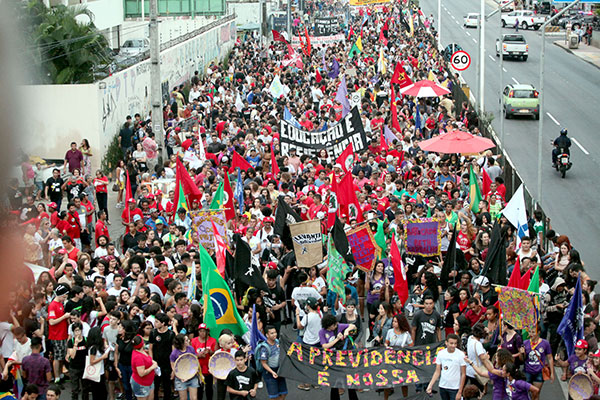 Demonstrations against proposed pension reforms erupted on the streets of Brazil on Friday, June 14. Every Brazilian state, the Federal District, and 181 towns and cities held protests against the Bolsonaro administration’s authoritarian attacks on working people and austerity policies, namely a pension reform which will broadly cut retirement benefits. In 111 of those towns and cities, transit workers suspended service.

Esquerda Diário, our partner publication in Brazil, has repudiated the  political repression against demonstrators in São Paulo, Rio de Janeiro, and other cities, demanding “liberty for all protesters detained by the police.” Esquerda Diário also repudiates the threats issued by São Paulo’s neoliberal governor João Dória against striking transit workers.

Some context: Increasingly emboldened domestic and imperialist forces have been aggressively pushing for more austerity and pension reforms since the commodities price shock of 2014 that sent Brazil into an historic recession and political crisis, culminating in an institutional coup d’état. Neoliberal measures have since had a profound impact on working conditions and basic public services in Brazil. The administration’s proposed pension reforms will cut back retirement benefits for all Brazilian workers who depend on social security and effectively force millions to work into old age without ever retiring.

Among the Brazilian youth and working class, we have witnessed an increasing determination and commitment to fight against the widely unpopular pension reform. Sadly, the movement would have been even stronger had it not been for the divisive tactics used by labor leaders who  have sought to separate education and labor causes, thereby isolating many students from the workers’ struggle. It Is no surprise that these same bureaucratic labor leaders are currently negotiating a pension reform with the Bolsonaro administration and Congress without any participation of the rank-and-file.

Friday’s demonstrations began with work stoppages in various sectors throughout the country, especially transit, including metro workers in São Paulo and Belo Horizonte and bus drivers in Salvador and Brasilia: four of Brazil’s major cities. Petrochemical workers in ten of the country’s twelve refineries suspended their activities in protest. Volkswagen and Mercedes-Benz plants saw partial stoppages as well. Many Universities and schools also joined the strike. Workers and students staged protests and roadblocks across Brazil.

The nation-wide strikes have shown that there is a real desire among vast sectors of the Brazilian working class and youth to topple the pension reform and Bolsonaro’s government.

There is no doubt that the stoppages in the morning and the demonstrations in the afternoon could have been greater had it not been for the treasonous policy of the labor bureaucracy. The union federation that represents São Paulo bus drivers, which has explicitly expressed support for the pension reform, cancelled Friday’s work stoppage in various cities. Other unions did not cancel the work stoppage, but nonetheless favored negotiations in Congress by announcing that the goal was merely to approve a milder pension reform. One spokesperson for Brazil’s leading federation of unions (CUT), called on workers to stay home instead of joining the demonstrations. These labor leaderships serve the interests of the PT (Workers Party) and PCdoB parties (Communist Party-MLM), who support Congress’s proposed pension reform and seek to enact similar measures in the states they govern. They are complicit in the neoliberal reforms and impotent against Bolsonaro’s attacks.

Despite the attempts by labor bureaucracies to cancel the strike, bus drivers in other major cities, including Curitiba and Recife nonetheless joined the work stoppage. Meanwhile, transit services were suspended in various major cities, despite union leaderships’ attempted betrayal. The strength and potential of Brazilian workers is expressed in their willingness to fight and confront their bureaucratic leaderships.

Rather than build a national general strike and express the real power of the working class, labor leaderships have opted to further their negotiations with Congress conservatives in order to pass a supposedly milder pension reform. Union federations claim that the new reform bill presented in the lower house is a “victory of the political pressure of organized labor.”

The new bill presented in Congress counts on the support of PT and PCdoB state governors who hold considerable sway over public opinion in Brazil’s northeast. The new proposed legislation, according to estimates, will save the state US$220 billion, to be gifted to the creditors of Brazil’s fraudulent and illegal public debt, as opposed to Bolsonaro’s proposal of a US$310 billion cut.

This attack on workers, like the reform proposed by the administration, represents the destruction of millions of Brazilian’s retirement. How can such an aberration be considered a “win”? This pension reform, whether it be Bolsonaro’s draft or the versions supported by the PT and PDT (Democratic Labor) parties, is a brutal attack on workers’ rights. And their claim of victory only goes to show that bureaucratic leaderships that seek to negotiate with the capitalist class behind workers’ backs, cannot be trusted.

Marcello Pablito, of Sintusp – the union that represents the non-teaching staff of the University of São Paulo – and the Revolutionary Workers Movement in Brazil said, “Our goal is not to obtain an “improved” pension reform. The support of PT and PCdoB governors for the federal pension reform is absolutely shameful. They want to enact similar reforms at the state level, along with right-wing state governors. The PT, PCdoB, and PDT parties are complicit in implementing the Bolsonaro administration’s neoliberal policies. We need a serious plan of action to defeat any and every austerity reform, including the “improved” pension reform defended by Congress and state governors.”

He continued, “Psol, the main left-wing political party in Brazil, therefore, must break with their coalition with the PT and denounce this shameful policy. We cannot separate the economic struggle from the political struggle. Against the administration’s neoliberal measures and education budget cuts, we need to raise a program to make the capitalists pay for the crisis. Bolsonaro wants a new ‘lost generation,’ squeezed between unemployment, underemployment and precarious employment. Against the pension reform, we demand a default on the fraudulent public debt and a reduction in working hours without salary cuts to fight unemployment and precarious employment faced by the youth.”

“We defend the immediate release of Lula from jail, without lending any political support for the PT party, which laid the groundwork for the institutional coup d’état with its strategy of class conciliation.”

“We understand that as the mass movement against the neoliberal reforms develops, amidst the crisis in the Bolsonaro administration following the Lava Jato scandal, the duty of the left must be to elevate the aspirations of the masses by raising the struggle for a Free and Sovereign Constituent Assembly, against every manner of authoritarian solution from above. To raise a program of radical democratic, anticapitalist, and anti-imperialist demands including: a default on the public debt; the expropriation of large landowners and the main strategic natural resources under people’s control;  the defense of oppressed groups, women, people of color, and LGBTQ+ and a struggle against capitalism in which conditions may emerge to fight for workers’ power based on organisms of direct democracy.”