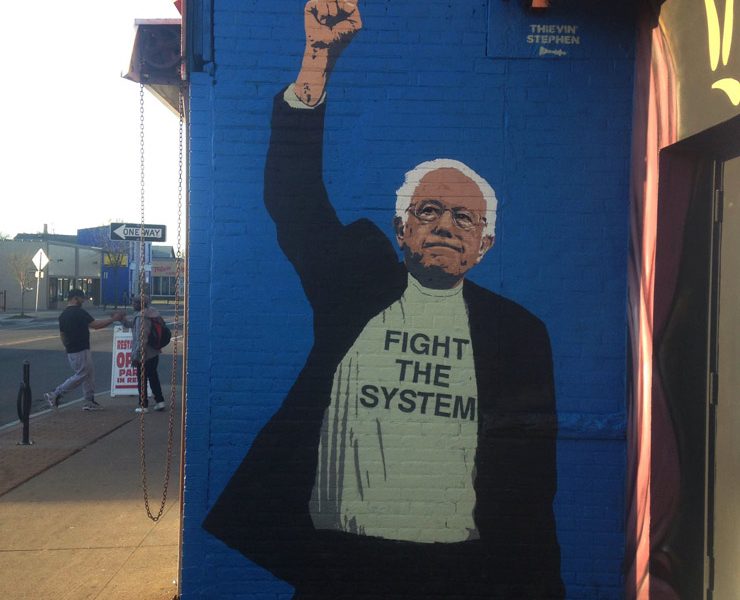 My love life was on shutdown for a while. I was determined to keep it that way until something really worth my while came along.

I found out about you about a year ago. I was suspicious of my own feelings at first; this wasn’t the first time I went all-in for someone who knows how to talk.

At first, it was hard finding common ground: your propensity for Grand Speech-Giving; your constant Simon & Garfunkel on the iPad; how you stay humming, “We Shall Overcome” cus you just love the tune. Finding a restaurant was like the hunt for the holy grail: you wanted those pork chops and I needed my seitan-subbed, low-gluten fare.

But we were pissed about the same things. You would rail against the smirking, POS politickers on the Hill who keep their corporate seats warm. Promise filled your words. You spoke sweet nothings of invoking Glass-Steagall, of laying a smackdown on the TPP, of reforming election campaign laws to make our stinking, putrid democracy less blatantly skewed for the billionaires. During the primaries, you fought a battle of 300, you took on the empire and we loved it. The DNC mocked you and all of us who backed you.

And I knew you were only human, you couldn’t save us all from capitalist misery and crisis. Even as president, you probably couldn’t erase my student debt and the leaden debt of my entire generation. I couldn’t expect you to guarantee a job for all of us millennial-hopefuls who are quickly turning -cynics. And you can’t roll back history and end the quickening march of anti-worker, anti-Black, environment-destroying, women-hating policies. But I stuck with us because nothing good comes easy, and you showed that you would do the best possible, given the situation–given capitalism.

Our relationship hasn’t been without its bumps. I wasn’t crazy about how it took months for you to address the unabated murder of Black people by police. It was almost over when I learned from friends (who never supported us) about your war record; that you endorsed Clinton’s Kosovo debacle in the 90s; that you gave George W. the thumbs up to wage war “against terrorism” wherever he wanted with the 2001 AUMF; that in 2002 you voted against the war in Iraq, but then backtracked and later voted to fund the same war; that you voted twice for regime change in Iraq…

And you were indifferent–to say the least–toward the struggle that Palestinians wage everyday against the brutalizing occupation, humiliation and utter genocidal policies of the Israeli settler state, in partnership with the US.

But f*ck, it was refreshing to see you red-faced, veins popping from your neck and forehead, as you finger-pointed the hell out of Hillary and the rest. She really didn’t give a damn about us, and it was obvious. With you, for the first time I cared enough about politics to go to a campaign rally to hear you speak. You talked about workers, undocumented immigrants, women’s rights…You were the most progressive thing around. I went with a bunch of people on a bus to support you in Philly at the DNC. We didn’t care that the Democratic puppets were blocking you, because you had our support and were going to continue fighting for us all.

I did begin to wonder if you were the person I thought I knew…when you graciously backed Hilary last July. It felt too easy, I thought you had other plans that you would reveal later. But those radical plans never revealed themselves. And the Our Revolution sounded great at first–mainly for the name–but ended up being a miserable launch pad for middle-of-the-road, respectable liberals who make no promise to shake sh*t up once they’re elected.

When Trump won, I spent the week bleary-eyed and angry. I crushed the pavement with some thousands of people at protests in Manhattan. It’s our time to fight! To show no give against the slew of reaction and hate that Trump represents.

But Bernie, you came out and said you would work with Trump?! Nah-uh.

Maybe worse, you stopped giving the Dems hell. It’s like you’re beginning to make them look good, salvaging Obama’s legacy. Thanking him for stalling the Dakota Access Pipeline after he stood by for months and watched the Water Protectors and their allies get beat up, tased, gassed, shot at by police and the national guard. It wasn’t “POTUS listening to the Native Americans” that forced the feds to halt the DAPL, it was the staunch resistance of thousands of people at Standing Rock!

The Democratic party has got to say we are on the side of the 99%.

Instead of coaching the Dems on how to co-opt social movements, we should be giving them hell.

I appreciate @POTUS listening to the Native Americans and millions of others who believe the Dakota Access Pipeline shouldn't be built.

Why give Obama the credit? The Standing Rock struggle points out Obama’s toxic policies the federal government’s role in destroying the earth, indigenous sovereignty and life.

After holding up a flag for all of us who are fed up with the political caste, you’re propping up a commander-in-chief who’s been in charge for almost a decade. You’re standing side-by-side with Nancy Pelosi. You accepted the Senate leadership position on the Budget Committee.

Love may be blind, but I can still smell when something’s gone bad. Rallying all of us who believed in you behind the Democrats is not going to go anywhere. We’ll lose steam, we’ll lose our fight. We aren’t going to change anything if we can’t keep our independence from the Democrats, the Trumps, the Clintons, all of the people who are interested in controlling and putting down our justified rage and radical resistance. They are and will always be for themselves and lining their pockets.