Despite NYSNA’s official endorsement and best efforts to ratify the tentative agreement, rank-and-file nurses at Montefiore Medical Center rejected the deal. Meanwhile, nurses at other facilities are demanding a re-vote. 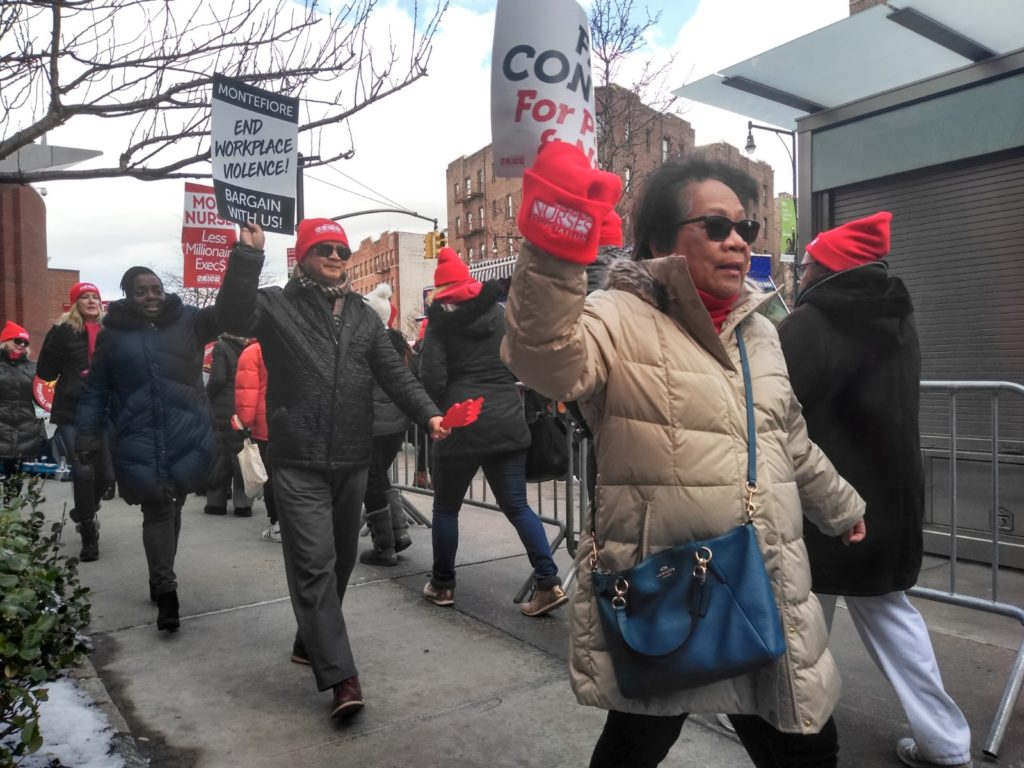 Last to vote among the Big Four*, nurses at Montefiore Medical Center were the only ones to reject a tentative agreement for a new contract, albeit by a slim majority. While the road ahead is uncertain, the nurses are continuing to fight for their patients and communities.

For years, Monte nurses have battled their employer for safe staffing. The multi-billion dollar healthcare system reigns over the Bronx’s health services industry, boasting 1,500 beds and one of the busiest, most overcrowded emergency departments in the country. Nurses routinely protest unsafe conditions including inadequate staffing, lack of equipment and space, and leaving patients in hallways. Patients at Monte are primarily elderly, working-class, immigrants, people of color, and poor; over 77% of inpatient revenues come from Medicare and Medicaid reimbursements.

Monte nurses have long been at the forefront of the battle for safe staffing ratios in New York City. Combative and “close to the fire,” they are at the crossroads of hazardous working conditions and deep social antagonisms. The care of a largely working-class, Black and Brown patient population is not a priority for employers and investors, nor is the injurious workload of healthcare workers who come from the same communities. Instead, the ruling imperative is profit. This is a deeply felt contradiction for nurses, who have embraced the slogan “Patients over Profits” in the fight for more nurses per patient.

In February, nurses across the four hospitals voted 97-98 percent in favor of authorizing a strike. The following month, union leaders submitted a 14-day strike notice. The threat of a 10,000-strong massive nurses’ strike caught the public’s eye and sent chills through employers. The “Safe Staffing or Strike” contagion wafted to other boroughs; nurses at The Brooklyn Hospital Center, too, authorized a strike by 98 percent.

Negotiations, which had moved like molasses during the preceding six months, accelerated after the April 2 strike date was in place. Four days in, NYSNA and the employers agreed to bring in attorney Marty Sheinman, who had mediated the 2005 MTA strike. With Sheinman presiding over the negotiations, employers offered a total of $50 million toward additional RN positions, and $4 million per year as a “bridge” healthcare coverage for pre-Medicare (pre-65) retirees. In exchange for bargaining on these new terms, NYSNA bargaining committees agreed to lift the strike.

Bargaining continued, with sessions stretching over 16, 18, and 20 hours. The strike notice was never reintroduced. At 1:00 AM on April 9, Sheinman presented a “mediators’ proposal” that was eventually voted through by the bargaining committees. (For more details on the contract campaign and the final TA, check out this article).

While most NYSNA staff and executive leaders urged members to ratify the agreement, there was notable silence from those on the bargaining committees who had gone against the deal. Executive committee leaders did not present a balanced discussion about the pros and cons of the TA. Instead, bargaining committee members said they were prohibited from expressing opposition to the TA, as it would be considered going against “good-faith bargaining.”

Once members realized the deal failed to meet their demands for real safe staffing ratios and had weak enforcement mechanisms, they protested the biased messaging. A flurry of challenges from members swept NYSNA Facebook groups. They demanded more details on the vague “staffing grids.” They protested the four-year contract. Some expressed anger at the chipping away of seniority privileges. They asked for more time to review the TA. They asked for details on ratification process: What would happen if some facilities ratified and others did not? Others continued to push for strike action and the fight for safe staffing ratios.

In response, the union’s officers and staff attempted to put limits on the discussion. Numerous Facebook comments and posts by rank-and-file members were removed by staff moderators. About a dozen additional NYSNA staffers were brought in from outside facilities and deployed at the Big Four, where they circulated the units seven days a week, night and day, to convince members to vote “yes.” Staff also phonebanked members, asking them if they could count on them to vote “yes” for the TA.

I am shocked and appalled at what’s been happening with this ratification vote. I’ve been getting numerous letters, emails to vote yes from NYSNA…even on the online ballot…[M]any are angry we did not strike as we had the power at the time. Many feel NYSNA didn’t follow through on what we were trying to achieve. Where I work managers are telling nurses to vote yes and reviewing the TA with them.”

Some rank-and-file members organized a “Vote No” campaign, rounding on units, sharing details of the TA, and handing out a flyer, “No ratios, no contract.” Monte nurses shared pictures holding signs that read, “#RatiosBeforeRatification.” Staff and leadership spoke unfavorably about these initiatives, describing them as divisive, ungrateful, and conspiratorial. One staffer even told members that the flyer was not legal because it did not have the NYSNA logo.

Each facility held separate voting schedules and processes—determined by elected executive committees and appointed staff. The first facility to vote, NY Presbyterian-Columbia (NYP), allotted members about two days to review the Memorandum of Agreement (MOA) and two days to vote. NYP’s vote garnered 1668** ballots, (about 48 percent of its members), with 91 percent voting in favor of the TA.

The Mount Sinai East Harlem campus allotted only one day of in-person voting. The 48 hours of online voting began the evening of Easter Sunday and during the Passover holidays. A total of 986 voted “Yes” and 705 voted “No,” or 58 percent to 42 percent in favor of ratification. But only an estimated 46-50 percent of all members were able to vote.

Finally, Montefiore nurses voted down the tentative agreement by a slim margin. The three day in-person vote and one day online vote rendered a total of 2,182 ballots, or 78 percent of all its members. The majority of Monte nurses resisted the great pressure to ratify and voted “No” in an incredibly close vote—51 percent to 49 percent.

At Montefiore, the future is unknown. Will individual facilities like Montefiore be able to return to bargaining with their individual employer? The framework between NYSNA and the joint employers, agreed upon over six months ago, has led to varied and contrasting interpretations.

In the aftermath of ratification at NYP and Sinai, the union’s officers and staff now face a whirlwind of questions and criticisms. They must answer to the multitude of voting irregularities and what nurses call widespread “disenfranchisement.” They have to explain the distorted messaging, aggressive “Vote Yes” campaign, and unchecked use of union resources to influence the vote. Lauren DiMuro, a nurse at Mount Sinai, shared her frustration on the group’s Facebook page:

I have spoken with nurses who never received the link to vote […] therefore, their voices were not heard. I don’t understand how less than half the amount of nurses who voted to give strike notice is enough to ratify a contract. I feel as if the vote time frame was perfectly timed to get the result it did. The fact that the vote ballots went out on a holiday to me was insane, but smart if you’re looking to sway the vote in a certain direction. Also the fact that there was only one day of in person voting is crazy. It was made clear that people were not receiving the ballots despite emailing NYSNA. At this point, more in person dates should have been added. To me, these actions told me that the committee wanted the vote to go only one way and they got what they wanted. The whole reason we were willing to strike was to get safe staffing ratios, which we did not. And I’m not even going to get started on the making of grids 30 days after ratification because that is nonsense, if you truly want something you do not agree to it without it in writing.

Mount Sinai nurse Jena Simon wrote a letter to the NYSNA executive committee, requesting a revote. She writes: “While I appreciate the dedication of NYSNA leadership—the rush to ratification and the net disenfranchisement of Sinai nurses—has been a serious mistake. However, there is an opportunity to right this wrong.” She shared it on the union’s page and within a few hours, nearly 100 nurses signed on.

Over the next few weeks, the executive committees will meet with management in the new “allocation committees” established by the contract. They will try to squeeze enforceable staffing ratios from the bosses—a dim prospect with the contract already ratified, both sides back to normal order, Magnet (re)designation under way, and a no-strike clause locked in place.

Meanwhile, an emerging sector of nurses are speaking out, demanding measures to address the undemocratic ratification process. It is possible that some may build a longer-term movement to help transform the union into a militant, truly democratic organization led by and for rank-and-file nurses.

**The breakdown of votes at NYP-Columbia was not released publicly by the executive committee. This is a calculated estimate based on the union’s statements regarding combined total votes, the estimated total number of members at NYP.