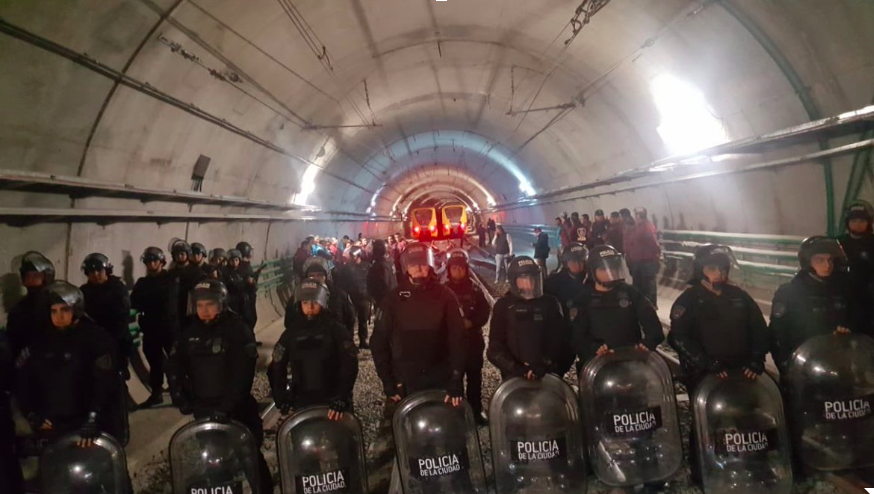 After a month-long struggle by Buenos Aires metro workers against austerity measures and runaway inflation, on May 22 the militarized police were ordered to clamp down on the workers. Sixteen workers from the Asociación Gremial de Trabajadores del Subterráneo y Premetro (AGTSP) were arrested, with some injuries. In response to the government’s repression, subway workers called for an indefinite, city-wide transit strike until their fellow workers are released from jail. Teachers in Buenos Aires have announced a sympathy strike. The jailed workers need urgent international solidarity!

The struggle takes place in the context of rampant inflation and major increases in utilities (electricity, water, gas, etc.) and transportation fare hikes, which in turn are undermining workers’ salaries. The government has set an annual inflation goal of 15 percent and is determined to cap wage increases – negotiated through national collective bargaining by industry. This is an attempt to undercut workers income, since estimated inflation is over 25 percent.

The workers’ struggle must also be understood in the context of the Macri Administration’s application for an IMF loan of $30 billion to immediately address the lack of liquidity and foreign investment. Amidst the capital flight, the peso was devalued by 20 percent in the past couple weeks. Although the terms of the proposed agreement have been concealed, it is widely known that the IMF is demanding more austerity measures and salary freezes in exchange for the loan. Macri’s government, in turn, will try to impose the austerity measures by means of repression.

Conflict between the militant subway workers and the government has escalated over the last month. The AGTSP union has used various tactics to resist attacks on their living standards, and have also made a concerted effort to win public support for their cause among the broader working class. One tactic used was the “fare strike” — allowing riders to board the subways without paying.The government responded with legal persecution and suspensions.

Workers then organized a series of short subway strikes affecting a limited number of subway lines. On Monday, May 21, the strike was planned between 7AM and 12PM in the H and E lines. Again the government decided to ignore the workers demand and sent in the police. The workers occupied a train tunnel until police repressed them with tears gas and rubber bullets, arresting 16 workers, including 7 union leaders.

An all-out strike against repression

In response to police repression, the workers are responding with a complete shutdown of all the subway lines in Buenos Aires until the jailed workers are released. Claudio Dellecarbonara, an elected delegate from the B line and member of the executive body of the subway workers Union as well as a socialist militant of the PTS, announced from his twitter account that all subway lines were going on strike starting at noon. “Disavowals, sanctions, fare hikes, repression, detentions and more. We, subway workers, can’t allow any more attacks”, wrote Dellecarbonara on twitter, and called for solidarity.

It’s unclear how far the government offensive against workers rights will go and how long the strike will continue. Workers solidarity is crucial to stop the government attacks. Since the strike against the repression begun at noon Argentina time, multiple unions and workers organizations have expressed their solidarity. Teachers in the city of Buenos Aires are declaring a strike in solidarity with the subway workers.

Left Voice calls on the workers movement, the organized Left, and all defenders of workers rights to condemn the repression against subway workers, and support the current strike. An injury to one is an injury to all!

UPDATE: The sixteen workers were released from jail late Tuesday. On Wednesday, May 23, subway workers continued the protest, opening the gates of all subway lines from 10 to 12 pm.