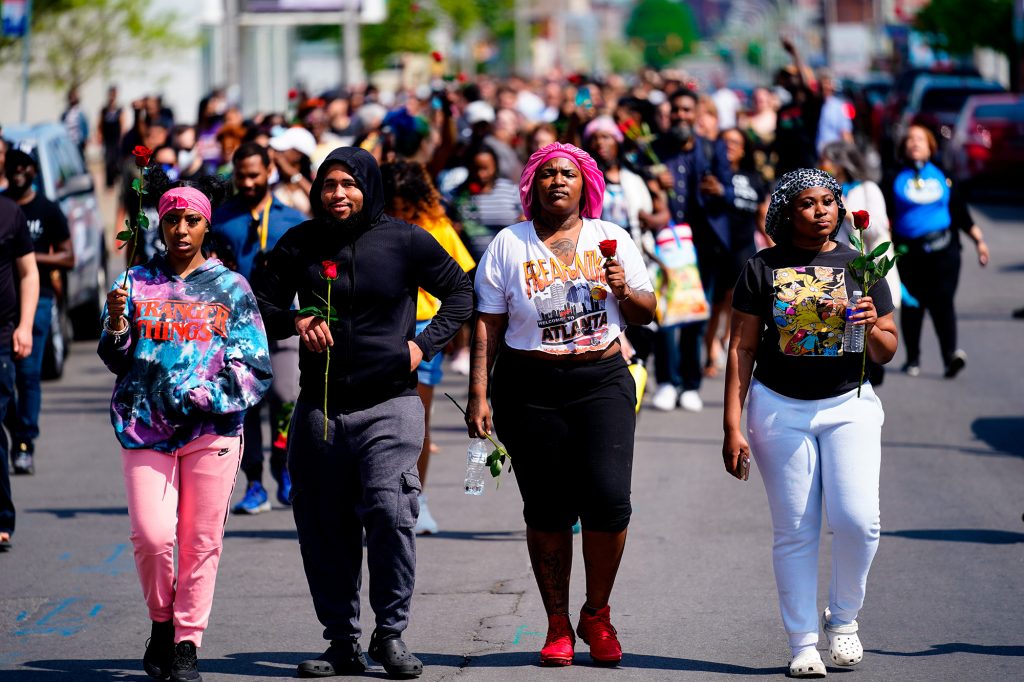 Saturday, May 14th, white supremacist Peyton Gendron drove several hours to a grocery store in a Black neighborhood and opened fire. Livestreaming his murderous rampage, he targeted Black patrons in the parking lot and store. His assault rifle is emblazoned with”N*****s” in white letters.

When the police arrived he was arrested without a scratch.

So far, of the 13 people shot by Peyton Gendron, 11 have died and 11 of the victims are Black. Only a few identities of the victims have been released – an elderly Black woman named Pearly Young and a security guard.

This attack is a violent expression of a rising white supremacist and patriarchal Far Right. It’s in the tradition of the El Paso shooter who targeted a Latinx community, or Robert Aaron Long, who shot up a nail salon and killed six Asian women.

It’s part of the same Far Right that harassed and ran over Black Lives Matter protesters two years ago and who stormed the Capitol in January of 2021. It’s the same Far Right whose political agenda is to stop educators from talking about racism in schools, to stop trans children from getting the healthcare they need, and who want to take away the right to an abortion. It’s a Far Right that is emboldened in this political context.

This is the consequence of the racist rhetoric and policies of Donald Trump, as well as Fox News pundits like Tucker Carlson who peddle the white supremacist “replacement theory” that argues that white people must defend themselves from being “replaced” by people of color. The actions by Peyton Gendron are the consequence of this right wing ideology spewed by Fox News.

The apprehension of the murderous white supremacist by police also exposes the racist nature of the police and the lie that there would be less murders of unarmed Black people through more “training.” The police have consistently murdered unarmed Black people but they arrest armed white bigots without a scratch. After Dylan Roof killed nine unarmed Black people in the historic Emanuel African Methodist Episcopal Church, he was treated to hamburgers by police before being taken to jail.

This is because police identify with white supremacists. There is extensive documentation of police and sheriffs departments around the country including members of white supremacist organizations.

Furthermore, the role of the police is to reinforce capitalism which is exploitative to workers and was built in the United States on slavery and the hyper-exploitation of Black people. The police maintain a racist economic system and are racists themselves. They are united with violent bigots like Peyton Gendron in killing unarmed Black people. No amount of “training” changes that.

Police have killed more people every year since George Floyd was suffocated to death by Minneapolis police at the hand of Derek Chauvin. Republicans openly welcome white supremacists, but the bigots are funded in the back end by Democrats under the guise of “training” police.

Biden is now calling for a $32 billion increase in funding for police and “anti-bias training”to increase the amount of weapons being used by police forces across the country. With more people being killed by police, inflation on the rise, and poverty on the rise as well, Biden’s answer is to oppress the poor, not increase wages or decrease prices. The Democratic Party has denounced racist attacks but emboldens the police who carry them out.

The capitalist system needs racist police. To enforce neighborhood borders, to harass impoverished people (disproportionately Black and Brown people), and to evict people from their homes. To attack LGBTQ+ folks in the street and immigrant vendors selling fruit on the block. Solidarity is growing along the struggles of the working class and oppressed and so those who do the bidding of the capitalist class want more police to crack down.

As workers start to organize unions; as women, trans, and non-binary folks take to the streets for abortion rights; and as workers in unions prepare to strike, the capitalist class relies on the white supremacist police to attack and suppress these movements. You can bet that the emboldened Far Right will attack these movements as well, just like they did during the Black Lives Matter movement.

It is up to the working class and oppressed people to organize ourselves to openly oppose white supremacy and solidarity with the victims and their families. The cops and the Klan go hand in hand. Conversely, the workers and oppressed must rise up together with fists in the air and fight back, through demonstrations, protests, and our most powerful weapon: the strike. We must demand that the state provide every support to the people affected by this attack, as well as their families; they should not pay one cent for the hospital costs or for the mental health support they will need for years to come. And we need an independent investigation of this shooting to find each and every person responsible for it.

The racist murders and the police’s kid glove treatment of the mass shooter must be met with fury and organization. Mourn for the murdered and fight like hell for the living. Through tears of rage we rise up and fight bigotry, for abolition of the police, capitalism, and a better world – socialism.