Starbucks workers in Buffalo, New York went on strike to call out the company’s union busting tactics. Let’s make this happen at every Starbucks in the country. 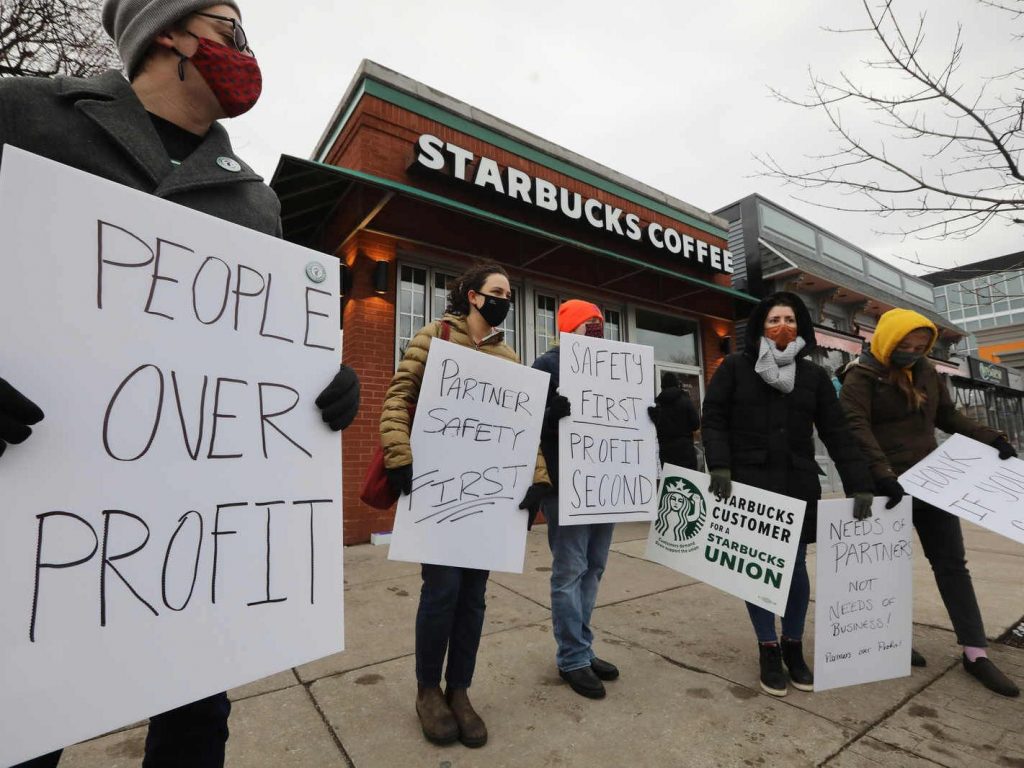 On Thursday, workers at a downtown Starbucks in Buffalo, New York went on strike after the company announced it was planning to withhold proposed wage increases and benefits from employees at newly unionized stores.

The one-day strike, which shut down the entire store, was a direct response to the announcement by CEO Howard Schultz that proposed raises and benefit increases at corporate-owned Starbucks cafes would not apply to locations that had already unionized or which are planning to unionize. Schultz, who founded the company and now has a net worth of almost $4 billion, claimed that his hands were tied and that Starbucks is legally unable to make changes to wages and benefits at stores that have organized or which are currently involved in collective bargaining. But this is a lie.

As Starbucks Workers United (SWU) representative Michelle Eisen explained in a viral video posted on TikTok: “This is an intentional misrepresentation of the law. Starbucks can absolutely give new benefits to unionized workers; they just have to ask first.”

While it is obvious that Starbucks could legally provide such benefits to all of its employees, intentionally withholding them from unionized workers is likely illegal, and SWU has already filed a claim of unfair labor practices with the National Labor Relations Board (NLRB).

Regardless of the legality, however, the announcement is obviously intended and timed to intimidate unionizing workers and undermine ongoing unionization efforts. So far, more than 50 Starbucks stores across the country have unionized, and hundreds more have submitted applications for union elections to the NLRB. At the current rate, it is possible that a majority of Starbucks stores could be unionized by the end of the year, a proposition that scares the hell out of billionaires like Schultz and the investors who rake in billions off the labor of the baristas that make Starbucks run.

In fact, the massive unionization movement has already palpably cut into the company’s profits. Starbucks’s stock price is down by at least 12 percent, bringing the company’s market capitalization to just under $88 billion. This latest cutthroat and illegal anti-union tactic is clearly a response by the capitalists to this profit loss. Investors are losing faith in the company because they know that an organized workforce won’t stand for the levels of exploitation that allow for the kinds of hyper profits they have come to expect.

Most importantly, this strike, which is at least the second such action taken by Starbucks workers since their massive unionization drive began late last year, shows an increasing willingness on the behalf of these workers and the SWU to nationalize their fight against the company’s union busting tactics. Building on such strikes and spreading them to stores nationwide will be an essential task of the union and Starbucks workers everywhere as they prepare to begin negotiating first contracts.