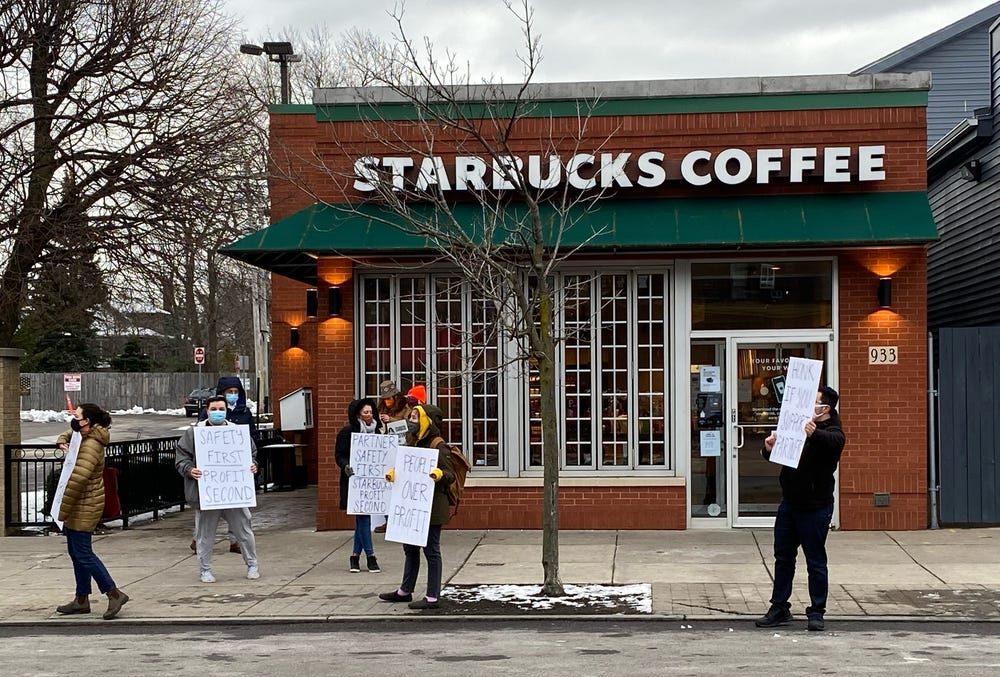 Walking picket lines for hours in the snow, workers at a Starbucks in Buffalo, New York walked out last week over safety and staffing concerns amid a Covid-19 surge in the area. The baristas voted in December to form the first ever union at one of the more than 8000 Starbucks stores in the United States.

The strike, which ended this morning, began on January 5 after workers learned that a fellow employee tested positive for coronavirus while on the job. But workers have been forced to work shifts with inadequate safety precautions for weeks as Omicron sends cases skyrocketing across the area. Flying in the face of new recommendations by public health experts, these service workers are not given N95 masks during their shifts, nor are they given access to testing. Workers at the Elmwood location in Buffalo reported that at least one third of their staff has routinely been out sick over the last several weeks. As Casey Moore, a barista at the Elmwood location told reporters, “The store is drastically understaffed, leaving the remaining partners exhausted and overworked.”

Baristas are being forced to do double the work to make up for staffing shortages, with no increase in pay. “There are typically eight to 10 [workers] in the morning and we have had around five lately on a regular basis,” one worker explained. “We have also been closing early with minimal staffing and staying late to ensure closing is done properly. Typically it takes 30-45 minutes to close…we have had to stay nearly two hours or more to close with limited staff.”

Starbucks’ response to the new outbreak has been haphazard and inconsistent across its thousands of stores. After some delay, management halted in-store dining at the Elmwood location, but then promptly reduced the period of paid time off in case of infection to five days to reflect the CDC’s new business-approved guidelines. Workers are saying the greatest risk they face is from working in close proximity to each other without adequate PPE.

In a letter to management announcing the strike, workers demanded that Starbucks pay workers to isolate at home until the outbreak is under control:

The walkout forced the store to shut down on Wednesday and workers did not return for the rest of the week to allow those exposed to or infected with Covid-19 to isolate away from other workers. The workers are further demanding that the company provide all employees with N95 masks, Covid testing kits, and hazard pay. They are also demanding that they be allowed to refuse service to customers who do not comply with statewide mask mandates.

Just one month after their historic vote to form a union, the Elmwood Starbucks workers are already flexing their muscles, showing the power they have when they are organized together to fight for their interests. After two years of being forced to put their health at risk serving overpriced drinks in the middle of a pandemic to make a living, they aren’t willing to compromise their safety, or the safety of their families and communities, to save a company that has continually prioritized profits over the lives of their employees. These workers know that any changes in their workplace will come from their own efforts. But truly winning their demands will require further strike actions that build off of the walkout they staged last week.

As two other Starbucks locations in Buffalo contest the results of their own unionization votes, the Elmwood workers’ strength and readiness to fight has inspired Starbucks workers across the country. Since Buffalo workers officially unionized in December, multiple new locations have gone public with their own union campaigns. Just this week, three more Starbucks stores announced union drives, and this morning, baristas in Cleveland, Ohio sent a letter to management declaring their intention to form a union.

Workers at a Starbucks in Mesa, Arizona also announced that they would similarly be voting to form a union this month. They join employees at stores in Boston, Chicago, Knoxville, Tennessee, and even Starbucks’ hometown of Seattle, who have all announced their intention to unionize with the SEIU affiliate Workers United. Despite its best efforts, one of the largest coffee chains in the world is facing a reckoning from its workers; and by all accounts the unionization wave is likely to spread.

The actions of the workers in Buffalo are an encouraging sign of what comes next for these future Starbucks unions across the country. Rather than waiting patiently to negotiate a new contract on the company’s terms, these workers are standing shoulder to shoulder on the picket line to fight for their interests right now. They know that their power lies in their ability to shut down their workplace, in the militant action of the rank and file. And that’s a lesson Starbucks workers across the country should take to heart as they organize their own union votes and fight against management’s lax safety procedures. The potential of these new unions is entirely in the hands of the workers; achieving the demands that spurred these union drives to begin with depends entirely on their willingness to confront the bosses, go against the pacifying maneuvers of union officials, and organize to fight.

But these Starbucks workers also serve as an example to the many more workers in the United States facing similar attacks on their working and living conditions, whether they are inadequate protections against the pandemic or years of cuts and abuses before that. Millions of workers across the country are fed up with bullshit jobs that don’t give them enough to survive; they’re fed up with the lack of paid time off, the lack of childcare, and the steady decline of working conditions that has become the norm for workers in the United States over the last several decades.

You might be interested in: Hundreds of Thousands of Workers Are Quitting Their Jobs. But a General Strike Is Something Much More Powerful

But while the bourgeois media is hailing the “Great Resignation” as a sign of workers’ strength, the real show of strength is in the collective actions of workers like the baristas in Buffalo, Chicago teachers, and the tens of thousands of workers who went on strike last October. Though the Starbucks workers returned to the store this morning, winning all their demands and guaranteeing a safe workplace will require additional strike actions like this one that are equipped to last until the workers get what they deserve. Harnessing their power to shut down operations and fight together in their workplaces to improve working conditions is the only way to come back to work on their own terms.