Bulgarian Nurses Are Fighting for Their Lives

Bulgarian nurses have been fighting neoliberal austerity measures in the face of increasingly terrible conditions for healthcare workers. 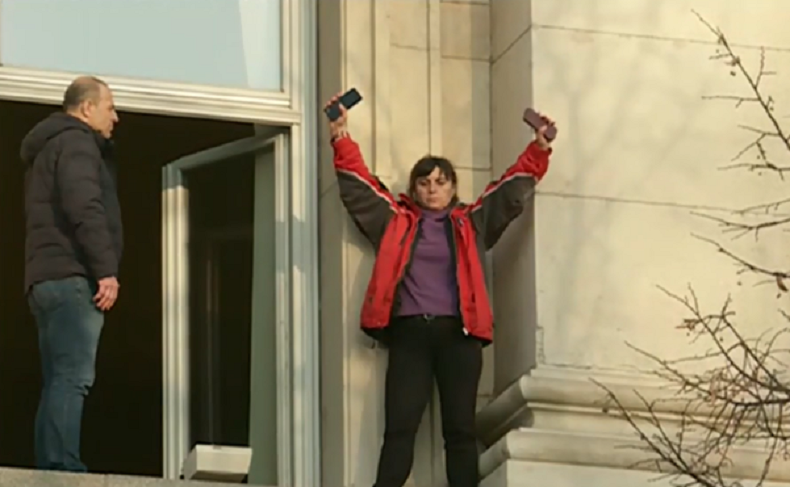 Three decades of austerity, healthcare cuts, and relentless attacks on working people caused Bulgaria to be gravely ill-prepared to deal with the COVID-19 pandemic. Since the beginning of the state of emergency on March 13, some, but not all, medical professionals have received a single set of protective equipment. Leaked photos show that facilities are being sanitised with rakia because of a lack of disinfectants. The government promised health care workers a bonus of €500, but no one has actually received it. This sorry state of affairs is the tip of the iceberg under neoliberal austerity. Nonetheless, in March 2020, Bulgarian nurses attempted a fightback. This article covers their last-ditch attempt to save the dignity of a profession most of whose members abandon it for better working conditions abroad.

Last December, UBMS (Union of the Bulgarian Medical Specialists, an autonomous and open organization for any specialist in the field except physicians) launched its fifth nationwide campaign. After a two-day tent camp in front of the Council of Ministers (the executive authority), UBMS delegates had a meeting with government members. On December 16, Prime Minister Boyko Borissov welcomed them with his usual ceremonial fervour, declaring he was “sorry to see them out in the cold”. After a two hour meeting, Borissov and the ministers of health and social policies made promises of salary increases. Because of the malformation of the so-called “clinical pathways” system, the additional budget of almost €500 million had no effect on the specialists. Such an unpropitious outcome necessitated another tent camp protest launched on March 1 and lasted until March 13. They demanded decent salaries, an end to the vastly divergent pay scales across private and public hospitals, and improvements in working conditions, which were the main focus of the media coverage. Still, there is one demand which has never been addressed and is crying for attention — namely, the appeal for radical reform in the country’s healthcare system.

After a few days of institutional indifference, protesters’ representatives were invited to join and contribute to the Health Commission meeting, which took place in the ex Party House on March 5. It ended more quickly than expected, without any grounding for their participation. Without raising the topics of concern to the nurses, they left them stranded and hastily ended the meeting. Nevertheless, their ad hoc solution was more than surprising — UBMS leader Maya Ilieva, Boyka Anastasova (a member of the union’s board), and three other nurses occupied the meeting room, refusing to leave. Law enforcement and media surrounded the building.

As a “strategic measure” on the part of the outside gendarmes, the building’s electricity was cut at 4:00 a.m. on March 6. The temperature inside fell drastically. According to testimonies of the protesters themselves, early in the morning, the security guards brought in stoves and invited protesters to stand near them. Within minutes, national security officials penetrated the room. Media wasn’t allowed in. Fortunately, the nurses’ phones still had battery life and the further escalation was broadcasted live on Facebook.

Boyka Anastasova went through the window on the railing outside, refusing to return until the media was allowed in the room. She later claimed that she was hit and pulled by the NSS (National Security Service), causing bruises on her body. She remained on the ledge for more than an hour while talking on the phone with a journalist live on national television. The director of NSS, general Krasimir Stanchev, personally raised his hand against the nurses (see video below). He later declared that there wasn’t any violence.

The nurses’ most far-reaching demand, however, goes to the core of the Bulgarian healthcare system. They want to overhaul the hospitals — public and private alike — with financing premised on “clinical pathways.” Their chief aim is to provide a standardized and “comprehensive” treatment plan based on patients’ predictable clinical course. It helps to estimate the expected costs correctly but also ties hospitals into a market-like race. The picture becomes even bleaker with the financing of private hospitals through the same scheme. Unlike public hospitals, private ones can afford expensive equipment which makes them more suitable for treating diseases that generate a larger share of the overall public funding. The management of clinical pathways determines the interests of the “company” and thus the salaries that medical professionals receive. The more patients “cross” the hospital’s highly paid “pathways,” the bigger its budget. But this management also opens up countless doors for scams through fake papers, diagnoses, surgeries and other manipulations. That money gets stuck at the top strata — in the pockets of directors, heads of departments and so on, without ever reaching the underprivileged and most exploited medical workers.

Clinical pathway system is responsible for the mass exodus of Bulgarian medical workers and the constant workforce shortages. According to an European Commission inquiry from 2017, over 90 percent of graduating physicians leave Bulgaria each year. Milka Vasileva from the Bulgarian Association of Health Care Specialists claims that in 2014, only twenty of the five hundred graduating nurses didn’t emigrate. This puts enormous pressure on the remaining specialists. Juggling two or even three jobs is not enough to alleviate the shortages. The system is also incapable of delivering a decent standard of living for its practitioners. Night shift work fetches a pitiful extra €0.12 per hour, while their net salary is between €300 and €400 — an insultingly low rate UBMS are seeking to raise.Consequently, until their first and radical demand on the protesters’ list has been addressed, their remaining requests are more or less unachievable. But even though UBMS’s quest for abolition of the commercial experiments in the sector is indisputably necessary, it’s also an overwhelming obstacle in their negotiations with the government. At this point, the cabinet’s representatives, the coalition (and even opposition) parties, and their ideologically like-minded supporters all refuse to inaugurate debate on that matter.

However, nurses’ cause didn’t receive widespread public support. Neither the labour organizations represented at the national level nor the general public felt compelled to physically support them. Podkrepa — one of the two major labour unions in the country — presented written declarations of support, though it didn’t oblige its members in any specific way. From the National Assembly’s tribune, the civil disobedience action of UBMS was severely condemned. The minister of social affairs, Denitsa Sacheva, declared that these were “politically motivated” acts, accusing the opposition and the republic’s president of responsibility for the intensification of the protests. Daniela Daritkova, chair of the Health Care Committee and the ruling party in Parliament, went even further. She stated that Anastasova and her peers are “mentally ill” women. Another of the ruling party deputies, Spas Garnevski, accused them of “terrorism.” The government’s response was predictable — a complete refusal to negotiate. The opposition party leader, Kornelia Ninova (from the so-called “socialists”), on the other hand, raised her voice in defence. Still, the oppositionists’ hypocritical behaviour was entirely in line with their one-year-long refusal–of deeds, if not of words–to comply with the protesters’ demands.

But this wasn’t the end of the dissent publicly articulated by those closer to the government’s wallet. The most prominent of the accusations came from the media outlet closest to the leading party, PIK. Their events report called it a “coup attempt” conducted by the frightful hand of president Radev. Furthermore, BAP (the Bulgarian Association of Physicians), scared of jeopardizing their interests, firmly distanced themselves. As a consequence of the UBMS unconventional move — i.e. the occupation — and their close connection with a local, autonomous, and radically left-wing workers union, CITUB (the Confederation of Independent Trade Unions of Bulgaria) also took an honorary distance. According to the official statement, they “cannot advocate for any anarcho-syndicalist activities.” This was a direct attack on both the protesters and the only lasting allies they had.

Nevertheless, Podkrepa managed to put forward a demand for night shift salaries up to €0.50 more per hour on a nationwide scale, affecting every industry. At this moment, while we await the peak of the COVID-19 pandemic, it is still unknown when the switch would take place — now or by the end of the year. Both nationally represented unions have also been able to negotiate higher salaries for medical professionals in schools and kindergartens. But this was a desperate step on the part of the government. It reveals a fear of confirming the success of UBMS actions and the fact that it is now compelled to fulfill one of their requests — albeit in a roundabout way — precisely because of those actions. Further encouragement is, for the government, unacceptable. It serves as inspiration for the hundreds of thousands of exploited workers in the country and the opportunity to raise their heads and defend their rights.

Now, awaiting the peak of the COVID-19 outbreak, it has finally dawned on some people that the nurses’ demands are not so outlandish. Our advocacy of their cause is more crucial than ever. If the conditions in the healthcare facilities were dreadful before the pandemic, today they are unspeakable. If the state of affairs for the exploited and the oppressed at those workplaces, and in general, was quite bad before, today they are horrifying. It is time to end market experiments — not just here in Bulgaria, and not just in the healthcare system — and start doing things differently.