Companies like Uber, Lyft, and Doordash claim their millions of workers are “independent contractors,” but that’s really just an excuse to pay them less. Now these workers have won an important victory: In California, they will now be considered employees. The bill was signed into law today. But this is only the beginning. 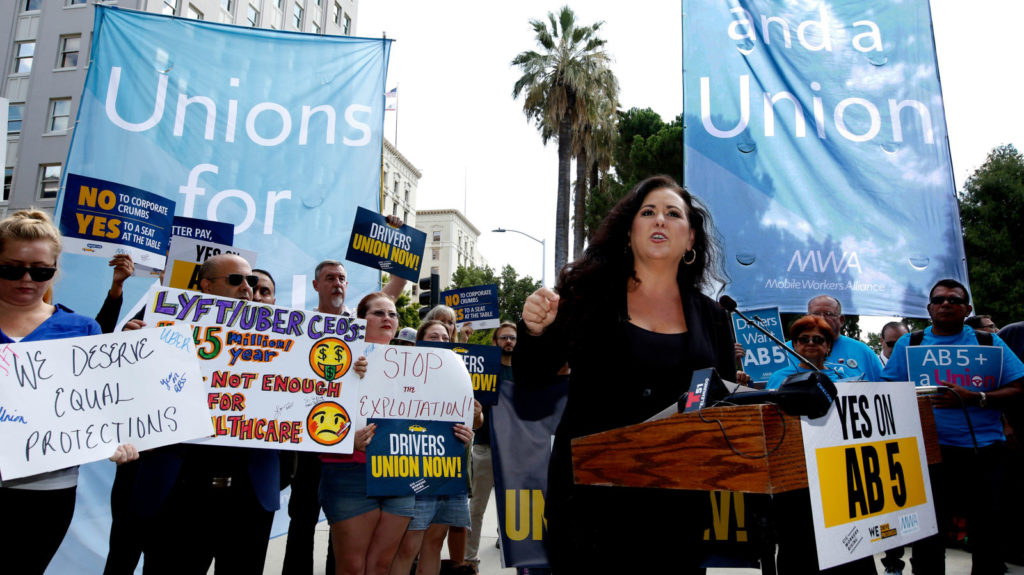 With the passage of Assembly Bill 5 (AB5), California’s long suffering “gig economy” workers will now be classified as “employees.” This legislation has the potential to improve the lives of millions of workers in the state, but the bosses and venture capitalists are not happy about the change. The self-proclaimed tech “innovators” are panicking because their business model, built on the hyper-exploitation of vulnerable populations of workers, is likely incapable of withstanding even the most rudimentary of labor protections: employee status.

AB5, which is supported by LA Drivers United, the Teamsters, the SEIU, and other unions, expands the functional definition of an “employee.” This will make it significantly more difficult for companies to misclassify workers as “independent contractors”—a category that places financial burdens on the individual while allowing the employer to pay almost nothing. The legislation could affect millions of Californians beyond ride-hail drivers, such as janitors, nail salon workers, adult entertainers, independent truckers, and others.

Uber and Lyft Fight Back

The California State Senate officially passed AB 5 on September 10. On Wednesday, the bill was signed into law by California governor Gavin Newsom. But Big Tech is not accepting the ruling without a fight. In the lead-up to the vote, Uber, Lyft, and Doordash established a united front to oppose the legislation, pooling 90 million dollars for a campaign to roll-back the new legislation before it goes into effect. This obstructionist campaign includes legal challenges, preparing a referendum to repeal the bill, and pushing the governor to include as many loopholes as possible before signing off. Additionally, Uber and Lyft proposed their own last-minute bill which would exempt them from the heaviest financial obligations by creating a new classification of workers: neither employees nor independent contractors, but “network drivers.” Uber dug in its heels further by releasing a press statement claiming that AB 5 does not apply to rideshare drivers, vowing in effect to ignore the new law.

The gig economy capitalists are claiming that any encroachment on their business model will adversely affect their workforces. Rideshare companies in New York City, for instance, are retaliating against drivers who succeeded in winning a minimum wage and a cap on the number of new licenses being issued. Claiming their hands are tied, Uber and Lyft in NYC have begun to limit the hours drivers can log into the system—effectively cutting drivers’ potential earnings. The app giants have also restructured surge pricing to their own benefit, and threaten to implement other detrimental changes.

So long as drivers remain mostly unorganized, the companies will continue to shape workflow and pay rates in their own interests, and the threat of de-facto layoffs is real. If gig workers want to defend the few rights we’ve won, and gain new ones, we must build national unions that are capable of bargaining for us. No amount of government legislation can substitute for the self-organization of this precariously employed sector of the working class.

The “Gig Economy” is a Sham

While the proponents of the gig economy make lofty claims about “being your own boss,” the reality is already well-documented: low wages, long hours, debt, stress, even suicide. According to research, Uber drivers often make below minimum wage. Indeed, the “gigification” of New York’s taxi system led to an epidemic of suicides. It was only after rideshare drivers and traditional cab drivers organized together to win labor protections that drivers have begun to earn anything even close to a living wage.

The gig economy must be understood as an offensive being waged by big capital around the globe against the working class. At bottom, gig work is an innovation for lowering the prevailing wage, side-stepping labor protections, and undermining unions. The “independent contractor” classification acts as a loophole for employers to retain a highly precarious workforce that lacks legal protections such as the right to form unions and bargain over wages.

The gig economy has an allure for corporate elites across the board: just think of the profits that could be made with app-based construction workers, nurses and delivery drivers replacing the “inflexible,” “costly” unionized sectors. Gig capitalism could be a union-busting profit bananza! The passage of AB 5 is an important bulwark against further unbridled “giganomics,” but it’s not enough. Yes, we should support the passage of similar legislation across the country, but if workers are to rebuild a powerful labor movement we are going to have to do more than ask the state to protect us.

The rapaciousness of Uber and Lyft is already known, as the two companies have bullied their way into one city—and one country—after another, year after year. In 2016, the two companies employed more lobbyists than all of Microsoft, Amazon and Walmart combined. The two behemoths have used every trick in the book to weasel their way into new markets in their attempt to break the back of traditional taxi sectors and form new monopolies in their pursuit of future profits.

As one researcher of the gig economy argued, Uber has made urban spaces worse places to live by increasing traffic, congestion, and accidents, reducing public transportation usage, and leaving a larger carbon footprint. Uber has even allied with the conservative Koch brothers associates in an “unholy alliance against public transit,” seeking to force the general population to use its services for lack of better alternatives (like efficient subways and busses).

The icing on the cake is that Uber almost completely avoids paying state and federal taxes. So the companies that are doing the most to skirt labor codes and undermine public transportation don’t even contribute monetarily to local, state or federal budgets. Certainly such companies meet the definition of social parasitism.

While workers are celebrating the important victory in California, there is also an air of uncertainty about the future. How will employee status affect the working conditions of drivers? Will there be set shifts, or can gig workers maintain flexible hours? What about layoffs?

It is estimated that employee status will raise costs for Uber and Lyft by 20-30%. As we argued previously, the highly speculative nature of Uber’s and Lyft’s business models leave much uncertain. Both companies continue to post large financial losses, and it is possible that reclassification of drivers as employees on a national scale would make rideshare companies hopelessly unprofitable.

The victory of AB 5 opens the door for drivers to assert their rights and bargain for better conditions. Already, new labor coalitions are forming in cities across the country to fight for similar legislation, and such initiatives should be supported. At the same time, so long as drivers are reliant on parasitic corporations that could declare bankruptcy any day, our futures remain precarious.

Resolving the dilemmas of the rideshare industry requires solutions that go beyond basic government regulation. If Uber, Lyft, and co. are parasitic companies that harm society, why not take them under public ownership? Rideshares could be run by national councils of workers and riders, collaborating with public transportation agencies to ensure an efficient and environmentally friendly transit system.

There are already calls today to nationalize the energy sector as part of a platform to combat climate change. Why not transportation as well? Big companies like Uber, Lyft, Amazon and others are impoverishing the working masses while contributing nothing to society. It’s time we say “enough is enough” and expropriate the companies that are expropriating us. We should call the shots ourselves—as the working class, the people who keep society running.