Yesterday, in a major blow to gig workers, California passed Prop 22. The measure allows companies like Lyft and Uber to continue classifying their employees as contractors, denying millions of gig workers rights to health insurance and a livable wage. We must demand full employment rights to all workers, and resist the “Uberization” of the economy. 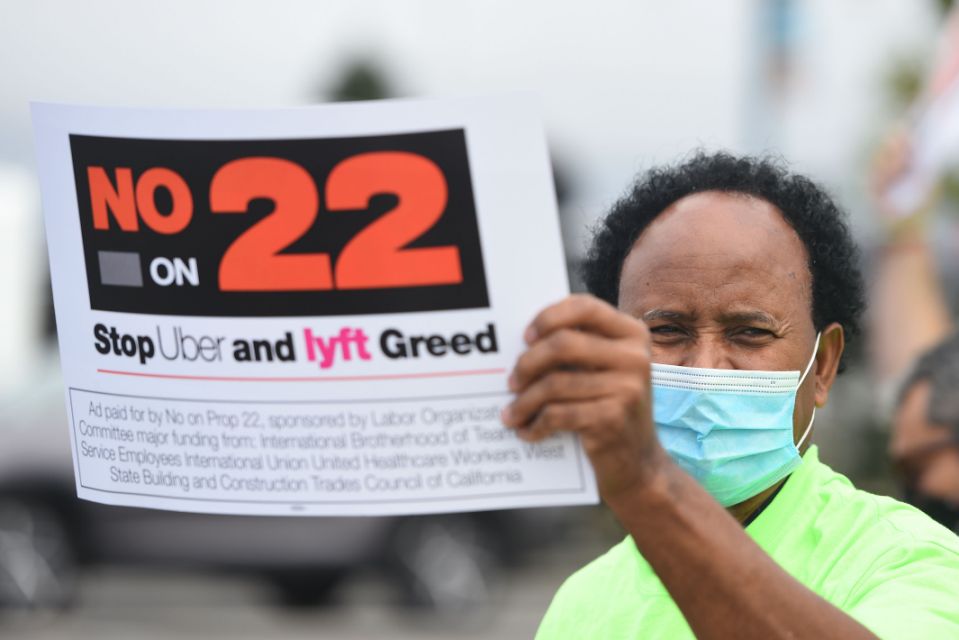 Yesterday, Californians voted to pass Prop 22, allowing gig economy companies like Lyft and Uber to continue classifying their employees as contractors. It was the most expensive ballot measure campaign in the state’s history, costing over $225 million. Lyft, Uber, DoorDash, and other gig economy behemoths contributed 90 percent of this exorbitant sum — $205 million — to pass the measure, vastly outspending their opponents. The passage of Prop 22 is not only a major blow to gig workers who have long fought to gain rights such as health insurance and a minimum wage, but it also risks setting a precedent for the working class in other industries.

Gig economy employee classification has long been a hotly contested battleground, and the ride-sharing apps are no strangers to controversy. Since its inception, Uber in particular has flouted local laws, operating without permission and even building technology to thwart authorities’ attempts at regulation. In 2018, the California Supreme Court ruled in favor of stringent requirements for classifying a worker as a contractor, rather than as an employee. According to the ruling, Uber and Lyft would no longer have grounds to claim that their workers were merely contractors.

The Supreme Court ruling inspired AB5, a bill passed in the California Assembly in September 2019 which requires gig economy companies to designate their workers as employees, making them eligible for employment benefits. The new law took effect on January 1 of this year, but gig companies once again flouted the law and did not reclassify their employees. Instead, they threatened to pull out of California, and began funneling millions of dollars into Prop 22.

In the end, despite heavy opposition in cities like San Francisco where Uber is headquartered, around 58 percent of Californians voted in favor of Prop 22. The gig companies have made a few meager concessions like implementing more safety measures and contributing vouchers for health insurance. But by and large, gig workers will remain precarious: they will not receive unemployment benefits, health insurance, or a minimum wage. Uber drivers earn an average of less than $11 per hour, and stories abound of workers sleeping in parking lots, waking up before dawn to catch riders, taking on massive debt, and working multiple jobs just to make ends meet. These working conditions have only worsened during the Coronavirus pandemic.

In stark contrast to their workers, these companies are worth billions of dollars — Uber and Lyft stocks shot up following news of the passage of Prop 22 — and their CEOs make millions annually. This enabled them to effectively buy the Prop 22 vote, undemocratically wielding their immense wealth in order to get through the best outcome for their bottom line, no matter how detrimental it will be to their workers and the working class.

While the ballot measure only protects gig companies from employment laws in California, the results of the Prop 22 battle are likely to reverberate across the country. Uber and Lyft are expected to pursue similar legislation in other states, cementing their pernicious business model around the country and ensuring that gig workers will be kept in precarious working conditions. Prop 22’s passage may also portend the introduction of similar business models to other industries.

We must fight to prevent this “Uberization” of the economy. The gig economy — often euphemistically called the “sharing economy” — is a sham. For all the gig companies’ talk of flexibility and lofty claims about “being your own boss,” their goal is to sidestep employment protections and exploit employees, squeezing every possible cent of profit from them. We must also fight to get money out of politics, and prevent these rapacious companies from buying legal advantages. The working class must unite to win labor rights for all, to stop precarious employment, and to prevent these dirty labor tactics from seeping into other industries.