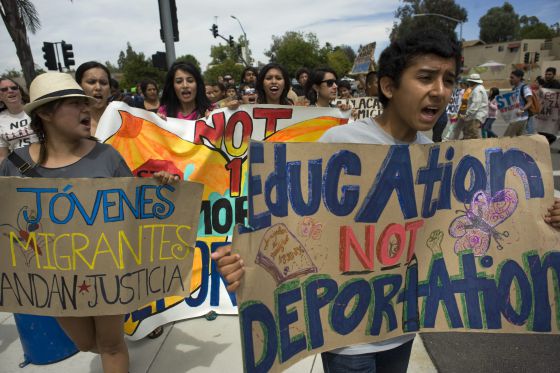 During his two terms, Barack Obama deported 2.9 million people and promoted a veritable industry run on the criminalization of immigrants: security companies, private prisons, prison services, and the utilization of what amounts to slave labor by people locked up in detention centers. Women and children are subjected to arbitrary detainment for merely requesting asylum.

Obama has fostered the criminalization, persecution and discrimination of immigrants, while promising an immigration reform that never materialized. The most “radical” changes, which end up dividing immigrants, were the executive actions to postpone deportations and grant work permits to DREAM-ers and their parents–who make up less than half of undocumented immigrants.

This has led to precarious conditions for immigrant workers, who produce 11 percent of the United States GDP and earn the lowest wages. As a sector of the US working class, they play an essential role in agricultural production, construction and services such as gardening, hotel and food.

This systematic attack against immigrants is used by big capital to increase worker exploitation. Harsher working conditions are imposed on a particular sector and the rest of the workers are threatened with unemployment if they refuse to accept lower wages, rotating shifts, longer workdays and reduced or no benefits. If black and white workers reject these conditions, they are blackmailed with the possibility of immigrants accepting them–divide and rule, the perverse policy of multinational corporations.

The implementation of NAFTA and the removal of tariffs on numerous products–in addition to the fact that industries in Mexico pay the lowest wages in the Organization for Economic Co-operation and Development (OECD)–has made Mexico especially attractive to multinational corporations. Countless industrial parks have been set up throughout the country, employing a significant part of the Mexican working class today. Meanwhile, factories have closed down down along the US Rust Belt.

In a context of global economic slowdown and drop in international trade, Donald Trump has appointed a racist, misogynistic, homophobic anti-semite as chief strategist and a racist who promoted the border fencing strategy in the US Senate as Attorney General. Trump intends to intensify Obama’s policies by carrying out massive deportations in a shorter period.

He also insists on the construction of the border wall (started in 1994 under Clinton), which he intends to fund by remittances from immigrant workers used to sustain millions of families in the poorest regions in the interior of Mexico.
Businesses south of the border have announced that the maquiladoras are ready to receive workers, newly deported from the US. Of course, with low wages and precarious work conditions at their disposal, the bosses never lose, and they are already making plans to benefit from the crisis. The multinational executives’ thirst for profit is more evident than ever.

We must organize resistance against deportations and precarious work

From 2015 to 2016, a wave of struggles for wage increases, the right to free unionization and against sexual abuse shook the maquiladora industry of Ciudad Juárez at Eaton, Foxconn and other factories. Struggles were also organized by the the super-exploited laborers of Driscoll and other agribusinesses.

The most exploited sectors of the working class rose up against precarious work conditions like low wages, exhausting workdays and the prohibition of freely choosing your union or even having one.

Meanwhile, in the US, fast food and retail workers launched the Fight for 15 campaign to increase the minimum wage to 15 dollars an hour. In solidarity with the mass movement in Mexico, the youth and workers of the multi-ethnic US working class took up the rallying cry, “They took them alive! We want them back alive!” for the return of the 43 disappeared students of Ayotzinapa. And during the tremendous struggle against Peña Nieto’s education reform, voices were raised throughout the US in support of the teachers and students.

Today, a significant part of the US population is against the deportations and the wall, especially in border states like California, Arizona, New Mexico and Texas. Since Trump’s election on November 8, anti-Trump protests have been organized in colleges and all major cities including Chicago, New York, Oakland, D.C., and Los Angeles. Teachers and students have taken part in these protests. Sanctuary states like New York, Chicago, Washington, Baltimore, Los Angeles and Seattle, which provide protection to immigrants, have also indicated that they will not carry out deportations.

The resistance is beginning to take shape. But it must grow under the banner of the unity of workers, women and youth on both sides of the Río Bravo.

For this reason, the Movimiento de Trabajadores Socialistas in Mexico is calling all human rights and immigrants’ rights organizations, cultural, social and political associations, left and women’s rights organizations, as well as collectives, unions, public figures, artists and intellectuals to come together to promote a large bi-national campaign in Mexico and the United States against deportations and precarious work conditions.

We also denounce the subordination of the Mexican government, which has responded with subservient announcements that it will facilitate the return of our countrymen and women who are deported from the US.
It is our relatives, friends, brothers and sisters who are at risk of being deported.

It is the entire working class–both in the United States and Mexico–whose working and living conditions are jeopardized by the US government’s anti-immigrant policies and impending economic isolationism, while multinationals prepare to reap even greater benefits from their exploitation.

In Mexico in particular, we are calling unions that consider themselves part of the opposition to be at the forefront of this campaign, like the Coordinadora Nacional de Trabajadores de la Educación (National Teachers’ Federation [CNTE]), the Zapatista Army of National Liberation and the Congreso Nacional Indígena (National Indigenous Congress), which comprises a significant part of the indigenous communities struggling against their dispossession.