“Calling Us Heroes While Trying to Eliminate Our Hazard Pay.” An Interview with a Grocery Worker

In our ongoing series of Workers’ Testimonials in the pandemic, Left Voice hears from Hank Kennedy, a young worker at a Detroit grocery store fighting for stronger safety measures and better pay on an essential job. 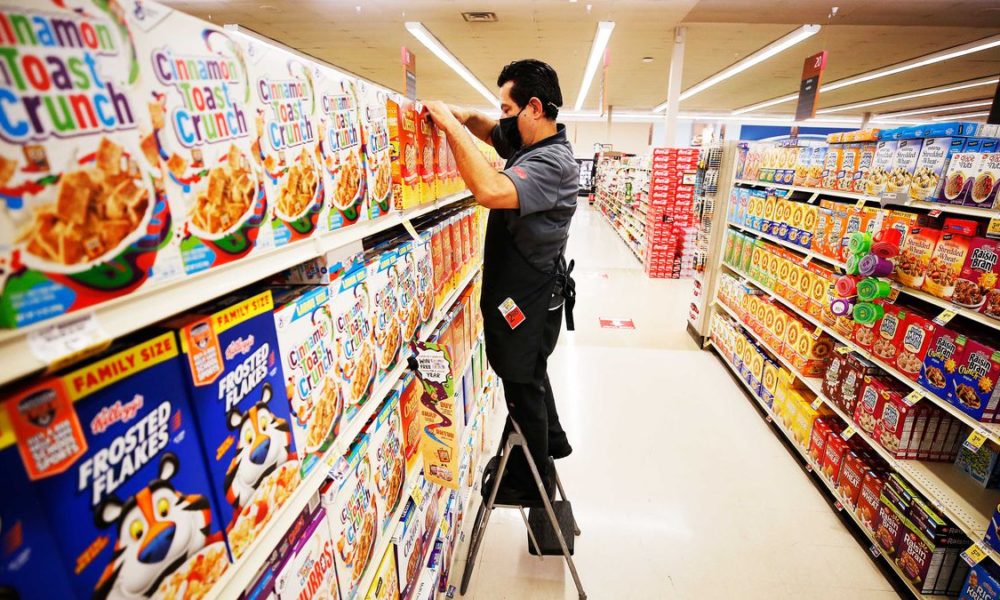 Who are you and what do you do?

My name is Hank Kennedy, I’m 23 years old, and I work as a seafood clerk in a Metro Detroit Kroger grocery store.

I would say so, given that everyone needs to eat and it’s my job to keep shelves stocked, wrap products, and serve customers.

In the health care sector, and elsewhere, workers are called “essential” and “heroes” when they are in fact treated as if they are disposable. Would you say the same thing is happening in grocery stores?

Absolutely. Kroger spent thousands and thousands of dollars on advertisements calling us “heroes” while at the same time trying to eliminate our hazard pay, which expires on the 17th.

No I do not. Management has been lax in enforcing common sense safety measures like requiring customers to wear face masks or limiting capacity in the store. Additionally, the one way aisles that are supposed to promote social distancing are not enforced and are a complete joke.

Many do not, especially after someone in our e-commerce department tested positive for the coronavirus. We also heard that four Metro-Detroit Kroger employees had died from the virus which just increased our collective fears. There was one guy who worked the front end who’s a total Trump supporter and thought the whole thing was a hoax but even he’s wearing a mask now.

What kind of health and safety precautions, if at all, is your store following to keep workers safe?

The store is taking the temperatures of everyone after they clock in and sending home those with high temperatures. We’re being provided with face masks and are mandated to wear them. The hours of the store have been reduced so that there is more time for cleaning after we close.

What has your union, the UFCW, done to improve conditions?

The union successfully negotiated for hazard pay (excruciatingly termed “hero pay”) of $2 an hour, $3 an hour overtime. We also received a lump sum bonus of $150 for part timers and $350 for full timers. They won the requirement of the company to provide us with masks as well.

In your piece in the Detroit Socialist, you have a particularly poignant quote: “Negotiations over safety and wages feel like palace intrigues, in which the lords and ladies of the union and management work out details, while the lowly peasants of the rank and file are locked out.” Left Voice is no stranger to the intrigues of union bureaucrats, having accompanied nurses in NYSNA fighting for safe staffing and academic workers struggling for an adequate raise against their union leadership, but what do you think accounts for this disconnect between the union leadership and the rank and file? And what should be done about it?

Fundamentally the union has made no asks of the membership in order to win our demands. Rather than encouraging something as minor as a sticker up, in which the workers would all wear stickers saying something like “Hazard Pay Now,” the union has basically told us to let them handle it. It’s a profoundly demoralizing experience, especially when I’ve seen the successful local example of walkouts by autoworkers over safety issues at their shops. I think it’s going to require a major consciousness change among the rank and file to make them aware that the leadership isn’t fighting hard enough for our interests and that they could do so much better.

In Italy, workers went on a general strike, in France, aeronautics workers protested, in the US, there have been walkouts and strikes in meatpacking, Amazon, General Electric, and at the Big Three auto makers, among dozens of other workplaces, for health and safety demands as well as for closing non-essential production with pay. What do you think it will take to win proper health and safety? And what are your thoughts on stopping non-essential production?

It’ll take a lot more than posting on social media despite what our union leadership seems to think. I believe we in my local should start an escalating campaign, leading to something like a sickout or walkout if necessary. Our lives are more valuable than the company’s profits and that goes for all workers everywhere.

Healthcare workers in NYC have started to organize together in cross union, cross disciplinary coordinating groups. And in Connecticut, rank and filers of various unions have come together and formed the Connecticut Workers Crisis Response group. Do you think something similar is possible in Detroit?

I do and I hope something like that materializes.

Left Voice has recently interviewed another Detroit activist about the fight against evictions. What are your thoughts on the relationship between organizing on the shop floor, and other workers’ struggles such as in housing, or against police brutality, or otherwise in all the other attacks on working people?

Workers and our organizations need to be aware that the oppression of capitalism does not end when we exit our workplaces. The stockholders in our companies often also have holdings in luxury housing developments and private prison complexes. We need to fight the boss wherever he is.

What do you think organized left groups, like the Democratic Socialists of America, should be doing to support the struggle of “essential workers?”

Organized left groups should facilitate the creation of rank and file groups within unions wherever possible. Our chapter is trying to do that with our members who are also in the UFCW.

Overall, what do you think needs to be done to combat the coronavirus crisis? How can the labor movement respond to the crisis?

We need a universal basic income so that people are not forced into risking their lives so that they can pay their bills. Labor should be prepared to take strike action to win demands in safety and compensation, rather than just relying on the goodwill of management or politicians.

Federally the response has been laughable. The federal government has shelled out billions for big business while only giving the average person $1,200 in relief. At the state level, my state has been a little better. Michigan is one of the hardest hit states and our stay-at-home order will last until the end of May. That said, Governor Whitmer should extend the state order barring evictions to provide relief to renters, as has been demanded by Detroit Eviction Defense.

A few weeks ago, the government ‘stimulated’ the economy to the tune of two trillion dollars with most of it bailing out corporations. Do you think the money could have been better spent?

It’s a sick joke that the federal government can seemingly always find the money for wars of aggression and bailouts of big business but never for social welfare. With the amount of money that’s been liquidated to help the DOW we could have a real single payer healthcare system, something needed now more than ever.

What’s next for you and your coworkers?

I think it will depend on whether the company extends our hero pay past the 17th. If they do, it’ll probably dampen people’s enthusiasm for workplace action. If not, things could get very interesting. As for myself, I’m not going to stop speaking out about these issues that’s for certain.