Canada Is Trying to Send Indigenous Water Protectors to Prison

As heat waves kill people across the Global North, Canada’s government is escalating its attacks on Wet’suwet’en water protectors as part of its efforts to suppress Indigenous rights and the climate movement. 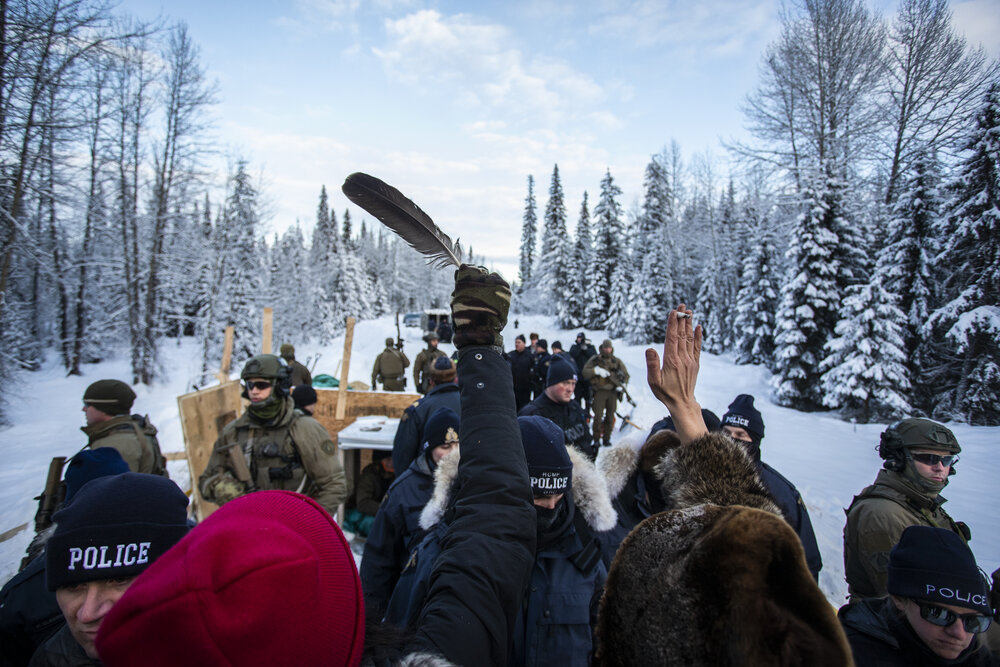 On Jan 7, 2019, Indigenous land defenders and protesters squared off with heavily armed RCMP at a checkpoing in Northern B.C. The ensuing conflict sparked rallies and outrage across the country, and draw into question Prime Minister Justin Trudeau's committment to reconciliation.

Prime Minister Justin Trudeau presents his government as taking Indigenous rights and environmentalism seriously, but these charges against Sleydo and other water protectors show the Canadian state’s true colors. Along with attacking the Wet’suwet’en struggle through the courts, the government uses militarized police to suppress leaders of the community and destroy their property.

Sleydo and other movement leaders have differentiated themselves from First Nation misleaders who approved construction of TC Energy’s Coastal GasLink pipeline against the wishes of the Wet’suwet’en community. For years, the Wet’suwet’en struggle has engaged in direct action, blocking the company’s access to unceded Wet’suwet’en territory. The community’s rejection of that misleadership, its refusal to cede its territory, and the militant tactics employed to defend it have won mass support from the Canadian working class and climate movement. It is no wonder the state is trying to imprison these leaders.

As Sleydo told Left Voice in an interview last December, “We’re connected to all these other movements and other Indigenous groups around the world. This is a consequence of globalization and capitalism and colonization all around the world. And the stories are very similar. So if we allow these things to happen here, then they’re going to continue to happen all over the world.”

Similarities to the Wet’suwet’en struggle can be found in the United States. President Joe Biden, like Trudeau, postures as if liberation for Indigenous people and a meaningful response to the climate crisis can come from the capitalist state, even as that very state attacks water protectors and Native communities. In May, the U.S. Supreme Court issued a ruling that greatly expands states’ ability to ignore tribal sovereignty. Meanwhile, water protectors who tried to stop the construction of the Line 3 pipeline in Minnesota face felony charges. Jessica Reznicek, a water protector from the movement against the Dakota Access Pipeline, is already in prison for “domestic terrorism” because she sabotaged construction equipment — a sentence that sets a dangerous legal precedent.

As the climate crisis intensifies, capitalist governments are escalating their repression of communities on the frontlines defending the planet. Though historically oppressed Indigenous communities face particularly harsh violence, legal attacks on allies of these communities such as Reznicek and environmental lawyer Steven Donziger show that the rulers will not tolerate anyone who fights to defend Earth against the capitalist system that is destroying it.

We demand freedom for Wet’suwet’en leaders and all water protectors. It’s a demand the climate movement should fight in the streets, and that all of us should take to our workplaces.