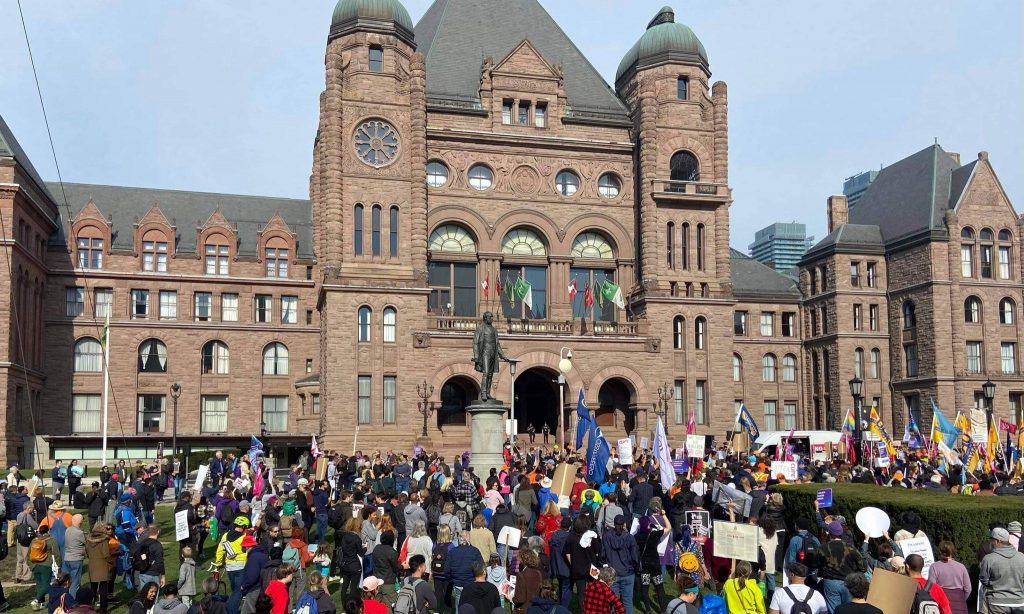 The Canadian province of Ontario is in the midst of a fierce labor struggle, the likes of which hasn’t been seen in decades. On Thursday, November 3, Ontario Premier Doug Ford signed Bill 28 (the “Keeping Students in Class Act”), which made it illegal for education workers represented by the Canadian Union of Public Employees (CUPE) and Ontario School Board Council of Unions (OSBCU) to go on strike.

The next day, 55,000 education workers walked off the job in defiance of the bill, risking a C$4,000 fine. These workers, mainly janitors, early childhood educators, librarians, and other support staff, are demanding a C$3.25 pay raise, overtime pay, an expansion of benefits, and 30 minutes of daily prep time.

The mood at the Friday demonstration was combative. It’s clear that after a decade of near-stagnant wages and skyrocketing inflation, education workers are ready to fight for their livelihoods. The average education worker in Ontario only makes C$39,000 per year. 51 percent work a second job and 27 percent have had to cut back on food. One teaching assistant told Left Voice that she and her husband can’t pay their mortgage. At a time when the province is running a surplus, there’s no reason why they can’t raise wages to match inflation.

The political nature of the strike made it particularly urgent, as implementing Bill 28 would set a precedent for preemptively crushing strikes with the stroke of a pen. Canadian governments, including the federal government of Justin Trudeau, are happy to use back-to-work legislation to end strikes, but Bill 28 went a step further in that it tried to stop the strike before it even started. It’s such an overreach that Ford had to invoke the “notwithstanding clause,” a rarely used legal tool that allows governments to bypass the Canadian Charter of Rights and Freedoms.

The education workers’ struggle garnered solidarity from across the province, with countless unions — public and private sector — joining CUPE-OSBCU on the picket lines. When polled, 62 percent of Ontarians say the Ford government is to blame for the impasse. There have been growing calls for a general strike, including from within the union leadership.

Just the talk of a general strike led Doug Ford to back down on Bill 28, offering to rescind the bill if CUPE-OSBCU calls off the strike. On Monday, November 7, at a press conference where many expected Ontario labor leaders to call a general strike, they accepted Ford’s offer, announcing that picket lines will be taken down and classes will resume on Tuesday.

Defeating Bill 28 was a win for the working class, and a demonstration of how even the whiff of a general strike can scare the ruling class into retreat. However, Bill 28 was essentially defeated through a labor truce: “I won’t use my weapon if you won’t use yours.” Instead of relying on the working class’s power in the streets, the union leadership asked their members to go back to work without a contract and trust them in the negotiating room.

The time to strike is when the iron’s hot, and Monday’s press conference would’ve been the perfect time to escalate the strike into a generation-defining general strike. All workers are feeling the crunch from inflation, and broadening the strike to include demands such as banning the use of back-to-work legislation, repealing wage-restricting bills like Bill 124, and raising the minimum wage could’ve united workers from across the province. There’s still the option to strike later, but there’s no guarantee that the momentum will sustain itself after weeks or months of bargaining.

The labor leaders celebrated, but Ford celebrated too. He avoided the worst case scenario without making any concessions on wages or benefits. He realized Bill 28 was a strategic error, in that it forced CUPE-OSBCU into a position where they had to massively escalate or back down in humiliation. Neither side wanted a general strike, so Ford’s offer to rescind Bill 28 allowed the labor leadership to pull the plug on the strike while saving face.

Workers deserve representatives who can see through these cool-down tactics, and aren’t afraid to take the gloves off when necessary. Without such a leadership, workers can only expect our standards of living to decline while Ford and his friends get even richer.