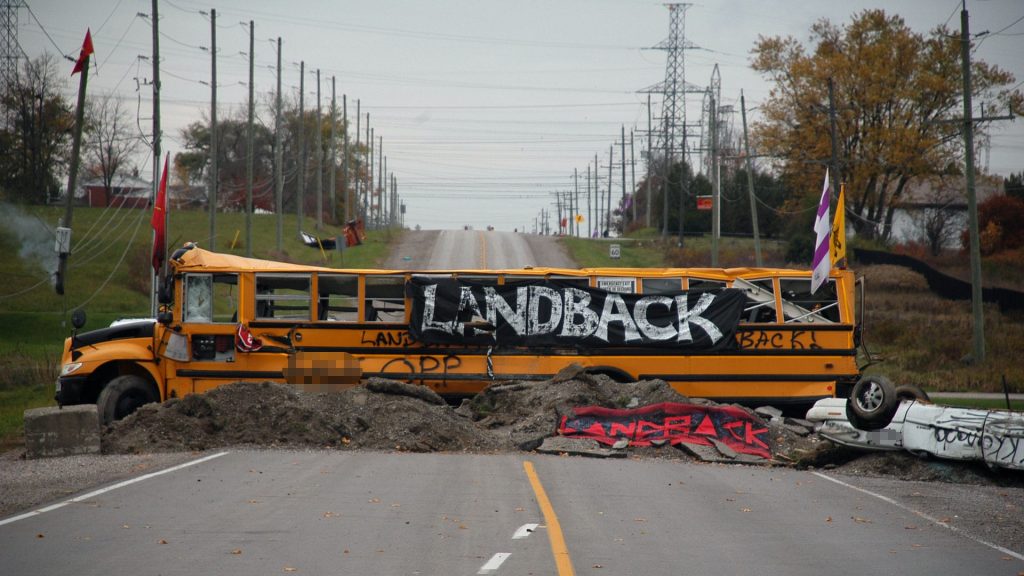 On September 12-13, Indigenous land defenders were once again in courts after over 20 months of fighting land grabbing in Ontario, Canada. The case is between Foxgate, a real estate development company in Ontario, and 1492 Land Back Lane, a land reclamation started by land defenders from Six Nations established on the land Foxgate seeks to develop on. Foxgate points to the agreements between themselves and the “official” government of Six Nations, the Six Nations Elected Council (SNEC), obtained after acquiring rights to the land from Haldimand County, as proof that they obtained “free, prior and informed consent” for the rights to the land. Whatever technical and legal trickery Foxgate may use to defend their development, the clear and easily provable facts are that this land is and remains unceded, and the Haudenosaunee have not been meaningfully consulted.

In 1784, in exchange for their service to the British in the American Revolutionary War and to compensate for land that was lost, the Haldimand Proclamation granted the Mohawks, the easternmost Haudenosaunee group of Six Nations, 550,000 acres of land for them to use however they wished. It did not take long for the terms of this proclamation to be disputed, violated, and entirely broken, by force, deceit, or otherwise. Since 1791, the land has been occupied by squatters and settlers, stolen to be either sold back to the crown or turned into farms, and forcefully absorbed for the establishment and expansion of nearby cities and municipalities. Six Nations even has proof that the land of the development site was not fairly sold back to the Crown, but stolen and sold by a squatting settler in 1841.

The group of corrupt misleaders that signed the agreement constitute the “official” and federally recognized government of Six Nations. These official governments, known as “bands,” were created by and got their power from the “Indian Act” of 1876, which legally paved the way for the complete subjugation and oppression of the 613 indigenous nations within the State of Canada, including the suppression of traditional forms of governance and their replacement by this new system, fully subjugating Indigenous governments to the governance and laws of the colonial state. The Haudenosaunee Confederacy Chiefs Council (HCCC), which is the traditional government of the Haudenosaunee, has the support and recognition of the majority of the community (as evidenced by the Band elections having a turnout of only 5 percent), but was not consulted by developers. This exact process could be seen during the struggle of the Wet’suwet’en people against the Coastal GasLink pipeline in 2020. The benefit of this is clear: the Canadian state and capitalists can divide and conquer the Indigenous community with the governments they created and imposed upon them.

Faced with a treacherous “official” leadership, Haudenosaunee land defenders, with the support of the traditional government, were forced to take action into their own hands, shutting down construction of the proposed 200+ unit subdivision in July of 2020. After successfully shutting down  the construction site, the land defenders reclaimed the area and established 1492 Land Back Lane. The Land Defenders and the HCCC called for a complete moratorium on all the land encompassed by the Haldimand Proclamation.

This call was met with rubber bullets, tasers, arrest warrants, and permanent injunctions for the State to squash out indigenous resistance by force. The Ontario Provincial Police (OPP) spent over 16 million CAD (11.8 million USD) policing 1492 Land Back Lane, with several violent raids leading to over 50 arrests on the camp in a year. The Land Defenders were never given a fair chance to defend themselves from the allegations of the developers, police, and justices of the court. Their elected spokesperson, Skyler Williams, wasn’t even allowed to attend the hearings, and yet injunctions and arrest warrants were still granted and enforced. The injunctions and arrest warrants were eventually dropped as the Court of Appeal concluded that the land defenders were not given a chance to defend themselves.

Despite the brutality of the police and the bureaucratic nightmare of the Band government and colonial courts, 1492 Land Back Lane and the HCCC won their demand for a moratorium on the land of the Haldimand Proclamation, which was announced by Cayuga Snipe clan chief Deyohowe:to (Roger Silversmith) representing the HCCC in April of 2021. While a moratorium was declared and most legal charges dropped against the land defenders, Foxgate still holds the right to the land, and is continuing its assault on 1492 Land Back Lane by seeking another permanent injunction, which would ban not just the reclamation site, but any demonstrations or acts of solidarity near the location.

While land defenders must once more wait an indefinite period of time to be given the verdict about what will be done with their own land, Skyler Williams stated on social media after the hearings that “our wins don’t come in courts of law or legislation. Our wins come on the land and in the bush. Those wins come from doing whatever it takes to live free on our lands.” The final outcome will not ultimately be decided in these courtrooms. The victories will be hard fought for and earned in the struggles “on the land and in the bush.”

From Wet’suwet’en to Standing Rock to 1492 Land Back Lane, Indigenous land defenders have been at the vanguard of the social movements across the continent. For the formation of a successful labor movement, one which can truly fight in the interests of the working class and oppressed by uniting their various struggles against their common enemy in the capitalist system, supporting the Indigenous struggle is crucial. The Ontario Federation of Labour (OFL) Canadian Union of Public Employees (CUPE) set a great example by releasing solidarity statements, educating their members on the history of the conflict, organizing demonstrations, and sending money, resources, and activists to help maintain 1492 Land Back Lane last year. These acts of solidarity must be deepened and replicated until Foxgate is defeated and the land is given back to the Haudenosaunee.