Hundreds of thousands of Puerto Ricans took to the streets and forced the governor to resign. But this isn’t about one politician. This is a product of the colonial debt regime imposed on the island. 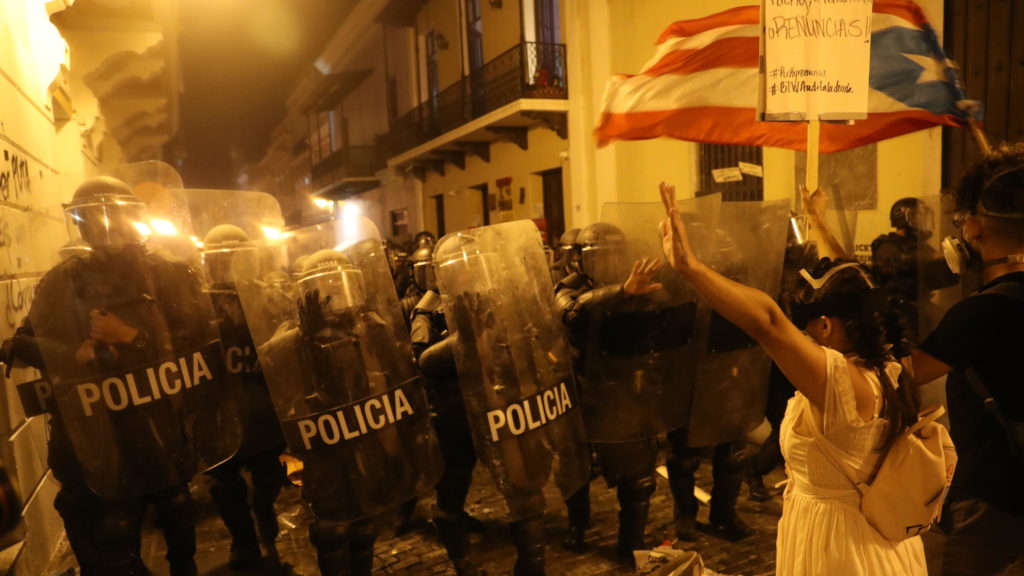 The massive protests in Puerto Rico, which have taken place for 11 days so far, were set off by a series of despicable intra-governmental messages. But they culminated a much longer process of predatory behavior on the part of international banks and the U.S. government, which is demanding that loans be paid on the backs of working people.

“Puerto Rico se levanta! Puerto Rico rises up!” is a chant that has gone from hopeful to combative. Immediately after Hurricane Maria, it was used to describe hope in the rebuilding process, as if to say, “Puerto Rico is getting back on its feet!” Now, however, the phrase has taken on a new meaning. Its use in the chants of last week’s massive protests is one of outrage.

Some of this outrage is certainly directed at the series of horrifyingly offensive and callous Telegram app messages in which Governor Ricardo Rosselló and other members of the government joked about the bodies of those killed in Hurricane Maria, made homophobic and misogynist comments and fantasized about acts of violence against their political rivals. The messages came on the heels of a huge embezzlement scandal in which Puerto Rican government officials defrauded the island’s budget to the tune of $15.5 million.

But the anger of the people of Puerto Rico has been simmering for years, increasing at a serious clip since the devastation wrought by the hurricane. Even before then, infrastructure was crumbling—including even the power grid.

The economic desperation of the Puerto Rican population—with 44% living below the poverty line—is part of what former Governor Alejandro García Padilla aptly referred to as a “death spiral”—but he might as well have called it a debt spiral. The U.S. Congress simultaneously taxes Puerto Rican people at high rates and disproportionately starves the island of funding; this is compounded by predatory banks that have gutted the Puerto Rican economy for profit, as was only recently revealed.

The banks’ involvement is a story that has repeated itself on the international stage in various countries, such as Ireland. To stimulate an economy, a country provides massive tax breaks to businesses—usually manufacturing and pharmaceuticals—encouraging them to invest there. Once the economy is deemed strong enough, the tax breaks end, and the corporations simply pack up, shutting down their facilities and putting massive numbers of people out of work, so that they can move on to the next place they can exploit. The corporations, having gotten what they could with minimal expense, take care of themselves while the economy of the nation nearly collapses, leading to austerity measures that harm the same workers whom the companies already exploited for years.

In Puerto Rico’s case, however, it wasn’t even the Puerto Rican government that had the authority to make this deal, but the U.S. federal government—in which, incidentally, Puerto Rico has no representation.

After the damage done to the economy in 2006, which completed U.S. Congress’ phaseout of the tax breaks that had been discontinued by President Clinton, the economy was in serious trouble. According to USA Today: “While the mainland U.S. added millions of jobs following the Great Recession, Puerto Rico never got back on its feet. The island has lost more than 20% of its jobs since 2007.” The Puerto Rican government was desperate to borrow money.

So the international banking community began to facilitate massive loans to Puerto Rico, packaging the bonds into funds and enticing buyers with promises of stable interest. The investors—many of which were retirement and pension funds—were given very little information about what the bonds were actually for, since banks’ activities in Puerto Rico isn’t subject to even the meager amount of federal oversight they face on the U.S. mainland.

To rake in fees, banks traded more and more of these funds, in many cases targeting Puerto Rican people and their pension plans. And when it became clear that Puerto Rico couldn’t possibly repay the debt and that the economy was about to enter a recession, the banks ramped up their lending in order to quickly cover the losses they were about to face when other investments they had made on the island inevitably went bad. The U.S. federal governments fined some of the banks, but the fines were so low in comparison to what they were making that the practice actually sped up. For example, UBS was fined $34 million for its predatory practices, but afterward, UBS and other giant banks made another combined $900 million.

Now these bonds are nearly worthless, meaning pensions and retirement plans will be out millions of dollars. At this point, the Puerto Rican government itself owes $74 billion in debts and more than $53 billion in unfunded pensions. There is a movement to cancel the debt in order to allow the living conditions in Puerto Rico to become less abysmal, and this could help the people of the island get back on their feet.

Canceling the debt will mitigate the crisis, and it must be fought for. Still, some of the damage is done—those pension plans that invested in bonds will have lost out on the entire investment. So yet again, the banks made off with billions of dollars while the retirement funds of working people are in jeopardy.

Having failed to hold the banks and hedge funds accountable for what they’ve done to Puerto Rico, the U.S federal government now has total control over Puerto Rico’s economy, and it is just as predatory—taxing workers at levels comparable to those on the mainland but starving them of food, medical care and other resources.

For example, Puerto Rico gets proportionately less food assistance than the mainland. A third of Puerto Ricans need food assistance, and over half of that number consists of children. Yet the funding level is capped at the same amount each year. So in times of greater need, when the U.S. government’s meager funding leaves people in hunger, Puerto Rico must plead with Congress for even the smallest of increases—a process that generally takes months, during which children go hungry.

U.S. News and World Report has detailed other disproportionate figures: Puerto Rico gets less Medicaid per capita than the states, and reimbursement rates are lower. Islanders must pay the same FICA taxes as other U.S. workers, but they cannot collect Supplemental Security Income, which is elsewhere offered to aged, blind or disabled people with very low incomes. Puerto Ricans face a lower threshold for the requirement to pay income taxes, and the island’s government charges higher income taxes to try to make up for the shortfall elsewhere, so although they don’t pay federal income tax, they are squeezed to the same degree as those stateside.

Even as the government earned interest from the repayment of Puerto Rican bonds that were “triple tax-exempt” for investors, it has no intention of offering relief from the strain of taxes on the working people of the island. Yet Trump has been fighting to prevent additional aid to Puerto Rico since 2017 in the immediate aftermath of the hurricane, calling any increase in funding for Puerto Rico “excessive and unnecessary.”

While the discussion about the possibilities for Puerto Rican statehood or independence continues amid multiple referenda and a process tied up in a Congress that denies the island governmental representation, one thing is entirely clear: The disproportionate funding levels and the colonial and parasitical relationship of the United States to Puerto Rico means the debt must be refused.

The current anger of the people of Puerto Rico has been caused by U.S. Congress and the banks protected by international capitalism. Workers internationally must support them with our solidarity—their fight is ours.