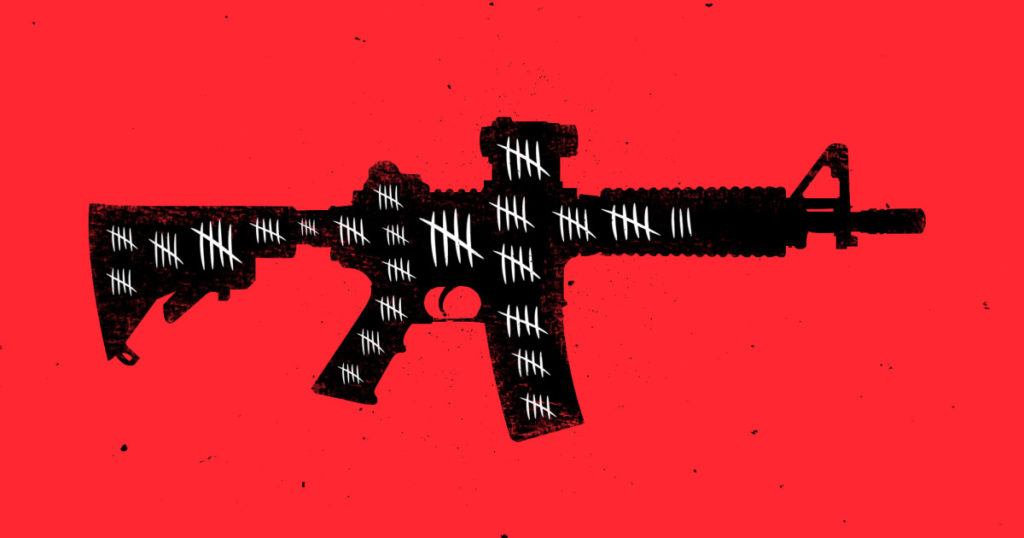 As this article was being written, the mass shooting in El Paso, Texas took place. As it was being edited, another mass shooting happened in Ohio. Another angry white man with right-wing politics murdered dozens of innocent people. Neither liberals nor conservatives, Democrats nor Republicans, have or can offer any solutions because this problem is systemic. It is ingrained in a history and reality of violent imperialism and patriarchy.  It is ingrained in the alienation of modern capitalism and the isolation and lack of social services—programs that both Democrats and Republicans have cut. And it is part and parcel of Trump’s mysoginst and xenophobic rhetoric.

Republicans: If the Killer Is White, He Is Labeled “Crazy”

The recent mass shootings by white supremacists are the direct responsibility of the rhetoric and policies coming out of Donald Trump’s white house. They are a direct response to the claims that immigration constitutes a national emergency. But, it’s easy for the Trump administration to blame individual mental illness to shift the blame away from himself.

Whenever these shootings occur, Trump and his ilk condemn the tragedy, but although there have already been 251 mass shootings in 2019, they refuse to do anything that will alienate the NRA. Republicans will not talk about their cuts to mental health funding or their attacks on education and social services. Instead, they blame the individual, claiming that mental illness is the sole cause of these mass shootings. This is a dangerous way of thinking. Already Trump is calling for “involuntary confinement” of mentally-ill people, and New York Governor Cuomo has proposed a database of mentally-ill people. Yet, experts say that those with a diagnosed mental illness are not the ones committing mass shootings; in fact mentally-ill people are all too often the victims of shootings—often at the hands of the police. Meanwhile, these proposals are never accompanied by any more funding to improve mental health care services.

And of course the mental illness trope is exclusively used to describe white mass shooters, while Black and brown people are presented as criminals,malcontents or terrorists.

In contrast, most liberals, including many in the Democratic Party, have responded to these shootings by focusing almost exclusively on gun control, with little to no understanding of the long-term impact such laws would have on marginalized communities—specifically communities of color and the mentally ill. Indeed, some of the very first gun control measures in the U.S. were passed as an attempt to disarm and criminalize the Black Panthers, who had armed themselves against precisely the kind of White-Supremacist terror we are witnessing now on an almost weekly basis. Furthermore, regardless of whether gun control laws intentionally target minorities and people of color, they are nonetheless disproportionately harmed by increasing police surveillance and mandatory minimum laws that make it impossible for judges to consider the circumstances of a given case when deciding on a sentence. And unfortunately, the recent popularity for “Red Flag” laws, designed to prohibit gun ownership by those deemed to be mentall-ill, will do little to actually stop violent gun use (those diagnosed with mental illness commit only about 3% of crimes in the U.S.) but would bring mentally-ill people into contact with police more frequently, which too often leads to death, arrest, or injury.

Like conservatives, liberals also defend the right of the police—armed to the teeth—to carry weapons and to murder unarmed people of color and people with disabilities. According to a report by the Ruderman Foundation, between 27% and 81% of people killed by police had a disability.  Liberals call for “gun control” applicable to everyone except the police and the military—the largest mass shooters of the world and in the US.

Marx argued that capitalism separates working-class people from the objects they create and forces them to form relationships based on money, a phenomenon he termed “alienation.” Capitalist society’s emphasis on “productivity” means your value as a person is based on how much profit you can generate for a capitalist. In this way, capitalism creates divisiveness and isolation. Racism, sexism, heterosexism, and ableism further increase this sense of estrangement. As the Trump administration has emboldened a wide range of bigoted views, it is clear that such alienation is increasing,especially among the youth.

This trend is not surprising; after all, in today’s society, what are the options for young people? Republican and Democratic politicians support privatizing education, making it more difficult to get an education. Although AOC proposed a “Green New Deal,”  there is no real challenge to the corporations who ravage the world and disproportionately pollute low-income, working-class, and POC neighborhoods. As climate projections offer more and more bad news, a feeling that the end of the world is near has taken hold of many—further increasing alienation.

Who Are the Victims of Capitalism?

If capitalist alienation is the root cause of much of this violence, why then do we not see, for example, Black trans women—who are being murdered at an alarming rate—committing acts of violence like this. Quite simply, this is because the isolation that right-wing mass shooters suffer is too often combined with a sense of entitlement and sometimes outright bigotry. Many of these killers have been taught that they should be revered and prioritized because of their skin color, their gender, or their class.

In U.S. society, there are increasing numbers of people of color, trans voices and social movements challenging the “great white man view” of history. Rather than building solidarity with these groups to improve their own lives and reduce alienation, however, the Trump administration and the right-wing media have encouraged disaffected white people to project their frustrations and to place the cause of their ills on immigrant communities, people of color and women.

In the U.S., the majority of gun owners are right-wing white men. Liberals who claim to represent oppressed people discourage gun ownership and self-defense.  No one questions that fascists should be disarmed—but we cannot rely on the parties of U.S. imperialism, the main source of violence in the world, to stop gun violence in the U.S. Furthermore, police departments and military units are filled with white supremacists; while the right wing has been arming itself, Black communities are being paid to turn in their guns.

The US government, built on the toil and suffering of Black people, has no plans to protect Black people. When Black people were armed in organizations such as the Black Panther Party for Self Defense the FBI and CIA worked tirelessly to destroy those groups. There has been no such attack on white supremacist groups because the police, FBI, CIA and US military are filled with active members and sympathizers of these groups.

A common thread of the mass shooters is also misogyny. All three of the mass shooters in Gilroy, California, El Paso, Texas and Dayton Ohio has previously expressed misogynist views. The mass shooter in Daytona had a “rape list” of female classmates he wanted to sexually abuse. And according to a gun safety website, the majority of mass shootings from 2009-2017 were related to domestic violence.

In certain cases of mass shooters women were targeted specifically. Opposing sexism and misogyny is a political fight. Sexism and violence against women are acts against the working class and oppressed people.

In addition to the increase in mass shootings by self-proclaimed Trump supporters there has also been an increase in opioid use, overdose and death. At the same time that mass shootings have grown in frequency, executed almost exclusively by right-wingers and Trump supporters, areas that voted for Trump in 2016 are being plagued by an opioid crisis. Opioid overdoses are six times more frequent than they were in 1999. The victims are disproportionately more white and more affluent than the rest of the country, which may be a reason why there is a more clinical and compassionate response to the situation than there was during the crack epidemic, which affected more Black people. Like the epidemic of alienation and mass shootings, the opioid crisis is also a product of capitalism. It is the response to the increased poverty of middle-class and working-class people, enhanced by the pharmaceutical companies’ massive push of opioids onto millions of people.

Whether it is mass shootings or overdoses and suicide: there are no answers to mass death under capitalism.

Capitalism cannot solve the problems of alienation, exploitation, misery, and impoverishment. What can? Solidarity and the fight for a more communal society—In a word: socialism. Socialism brings people together to reject the lies of capitalism, misogyny, and white supremacy. A socialist society, created through revolutionary struggle where the international working class and oppressed people must be born in a democratic and united fight.  It would foster unity rather than contempt for women, trans people, Black people, and immigrants because they would be leaders, creators of that revolution—this is how to fight alienation. We need a world where the health of the planet and all the people on it are a real priority, something even the most left of “social democrats” do not support.

As long as a minority controls the wealth and social resources, there will be misery for the majority of the world. As long as there is profit to be made, people will continue dying of overdose. As long as society is based on the subjugation and ownership of women and superiority of whiteness, there will be more femicides and mass shootings. There is no hope for ending mass shootings under capitalism. The hope for humanity is the hope of a socialist revolution.