Capitalism Is Fanning the Wildfire Flames

Capitalism-driven climate change has led to record-breaking wildfires on the West Coast. 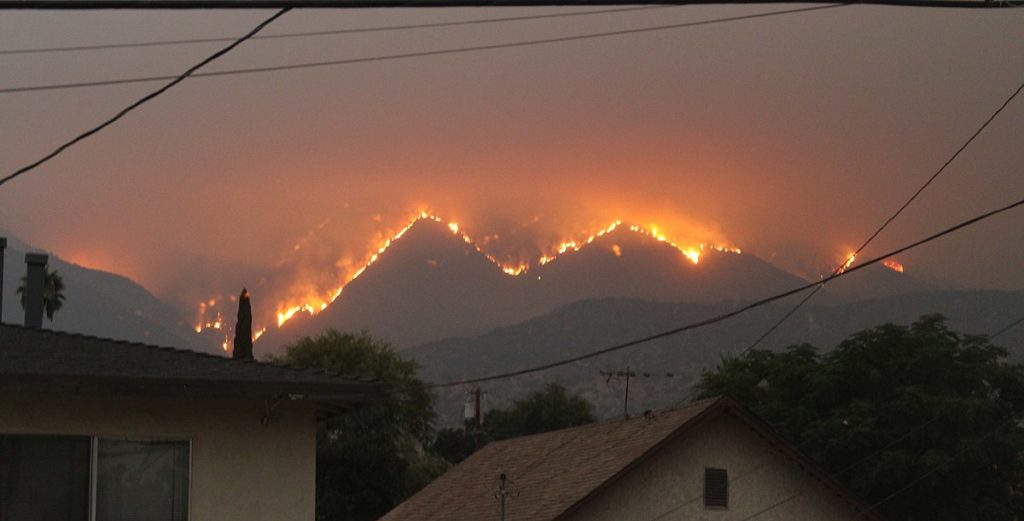 Tens of thousands of buildings have been destroyed and dozens of people have been killed by one of the worst wildfire outbreaks in California and Oregon history. Dozens more are still missing. Smoke from the fires covers cities from Los Angeles to Vancouver. People are wearing N95 masks not only against the coronavirus, but also against the thick smoke. The air quality has gotten so bad that it’s off the EPA’s air quality scale. An estimated 500,000 people in Oregon are on evacuation notice. Over 900,000 acres of Oregon and 3.1 million acres of California have burned.

Berry Creek, a town in Northern California, was completely destroyed by the fires. “The school is gone, the fire department’s gone, the bar’s gone, the laundromat’s gone, the general store’s gone,” says one local resident. In the state of Washington, over 930 square miles have been burned. Areas of the state not on fire are still choking on smoke that’s blowing in from Oregon and California. At least one person has died from the fires in Washington.

Climate change is affecting the earth more in 2020 than ever before. The increased number of tropical cyclones (four in the Atlantic at the time of publication), the coronavirus pandemic, and the extreme dry conditions and heat waves amplifying the California fire season are all effects of global warming. L.A. County blew past its temperature record, hitting 121 degrees Farenheit in one town in early September. Temperatures in the three digits have been frequent in the region lately. There may be the temptation to view the extreme devastation of 2020 as an outlier, but science indicates that these disasters will get worse. The evidence points to one particular culprit: greenhouse gas emissions.

Some people blame individual choices for climate change  — if only individuals would decide to fly less or eat less meat! While we all must do what we can to reduce our impact on the environment, the average human has nowhere near enough power to stop climate change, nor change how the economic system works. After all, global shutdowns of economic activity due to the coronavirus have likely only reduced carbon emissions by a mere five percent in 2020, showing the limits of individual actions in combating climate change. Capitalist governments subsidize the fossil fuel and big agricultural industries, making a greasy burger cheaper and more available than locally-sourced fresh fruits, vegetables, and healthy proteins. The small number of people who do have that power are driven by a relentless obsession with ever more profit.

The U.S. in particular lags even other capitalist nations in public transit and public health development, while the U.S. military is one of the world’s greatest contributors to climate change. The ruling class pushes ever-bigger houses that consume more energy to heat and cool indoor volume that is uninhabited most of the time. People are encouraged to buy multiple gas-guzzling SUVs and other excesses that are profitable to capitalists, but which no one really needs to live a healthy and fulfilling life.

The effects of capitalism on the climate continue with the corruption of the political system, where corporate interests block democratic initiatives like banning methane fracking or disposable plastic bags. Even our would-be savior from the Trump regime — the Democratic Party — has no interest in ending U.S. imperialism, meaningfully addressing the housing crisis, nor taking serious action on the climate emergency.

We already have the means to feed everyone, but much of it goes to waste. Instead of investing in sustainable mass transit, capitalism presents a steady supply of new “green” cars that keep pushing highly individualized consumption and will just shift the problem from fossil fuels to lithium and rare earth metals. Capitalism is fuelling climate change — it is incapable of providing a solution.

The solution to climate change isn’t yet another new product to be sold for profit, nor is it another neoliberal attempt at “market-based” regulation that will be too little, too late. Only by restructuring the economy to meet human need — not corporate greed — while respecting the sacred land and environment that keeps us all alive can truly stop this climate nightmare. In other words, we need to fight for socialism, and for a system which is compatible with the survival of humanity and the environment, with sustainability at its core. Together, we can rebuild our global economy to put science and humanity first, and we can have both better lives and a healthier planet.

The image used in this article is licensed by its creator under a CC BY-SA 4.0 International License. No changes have been made to the image.