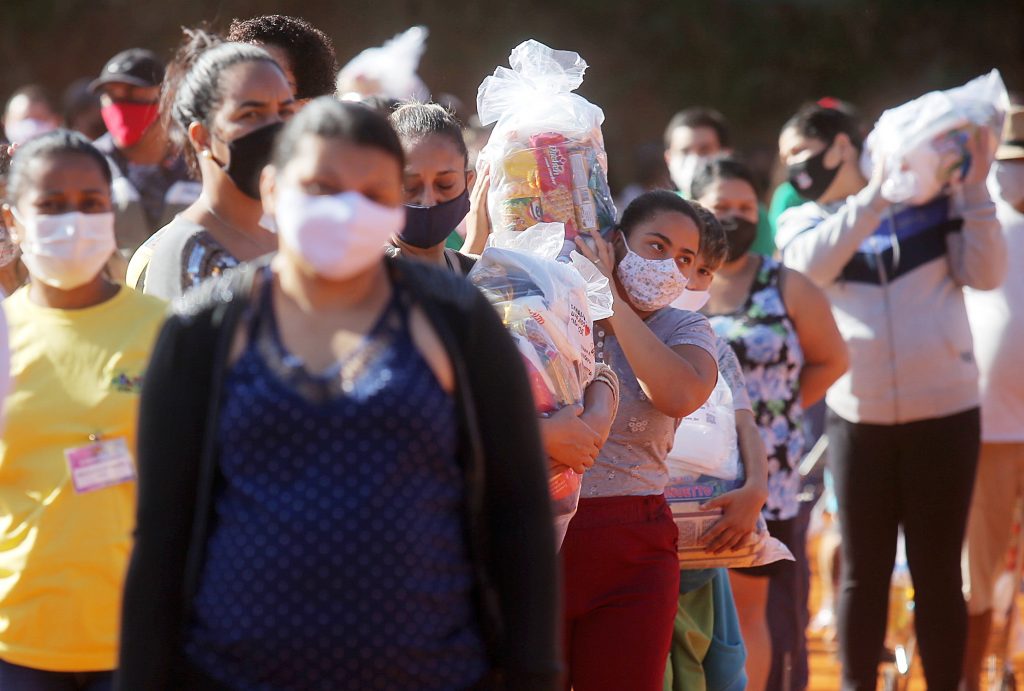 The front page of a Rio de Janeiro newspaper has a striking image: three men scrambling for bones that have just been thrown out from a supermarket. “Before, people passing by here would ask for pieces of bone with meat to feed their dogs, “says one of the managers.” Now they come to get them to eat themselves.”

María stands in line with her daughter at a health clinic in Chiquimula, Guatemala. She tells the assistant that she has nothing but tortillas to feed her child. In that country, nearly half of all children suffer from chronic malnutrition.

Unemployed piqueteras march to the offices of the Mondelez multinational corporation in the Buenos Aires metropolitan area. They hold a giant sign that reads “Balen los precios” (balance the prices). A spokeswoman says that the soup kitchens are not enough, that children are going hungry, and that the prices of some products have already risen five times this year.

These are just three stories behind the shocking data international organizations report from time to time. The latest came out this week. According to the Food and Agricultural Organization (FAO) of the United Nations, the number of people going hungry in Latin America is at its highest in 20 years. The number totals 60 million, which is an increase of 14 million in a single year.

But those numbers do not even account for how bad things really are. Nearly 270 million are “moderately or severely food insecure.” How do we put that? A “little hungry”? Did they “trick” their stomachs? Did they eat a few tortillas and stripped bones, but were still “hungry”?

The increase “could be explained in part by the effects of the Covid-19 pandemic,” says the FAO. Obviously, millions of people who had been getting by with informal work were left without any income. Governments increased social assistance to lessen the blow, but the data confirm that this aid was so miserable that it failed to guarantee even the most basic food for the arms and muscles of the working class that moves the world. Nor did it protect future generations, who suffer the most from the effects of hunger in their formative years.

UNICEF recognizes that the pandemic has only worsened an already existing “humanitarian” crisis. And the organization makes clear that it is not just the lack of food, but also obesity and other problems that stem from poor nutrition. “For children to grow up healthy, we need to ensure all families have access to affordable, nutritious food,” says the organization’s regional director for Latin America and the Caribbean.

According to studies, Latin America is the continent where “food insecurity” has grown the most. It’s something the mainstream media never talks about.

Just a few blocks away from the “bone rescuers” and women protesting the prices in the food stores, there are private neighborhoods and luxurious country clubs. Beyond the cities lie fields as far as the eye can see. On the coast, we find private ports from which ships leave loaded with food that will “come back” loaded with dollars.

This irrational contrast is called capitalism. And about capitalism, there are new data that are brutal. For instance, the number of multimillionaires in the region rose from 76 to 107 during the pandemic. The fortunes of the 100 richest people rose from US$284 billion to US$480 billion. How much is that? It’s greater than the “wealth” produced in Argentina (and many other countries) over the course of an entire year.

That prestigious list includes Argentine businessmen such as Marcos Galperin (of Mercado Libre), who got rich these past months as e-commerce boomed. It includes the energy executive Alejandro Bulgheroni, and food magnate Gregorio Pérez Companc. Then there’s pharmaceutical businessman Alberto Roemmers — no surprise his fortune would grow during a pandemic — along with Eduardo Eurnekian.

In the meantime, poverty reached 40 percent of the population, millions are hungry, and the government has cut social spending. The agreement with the IMF will no doubt make things worse.

Every time these data come out, a lot of media outlets treat it as if it’s  news. They show pictures of hungry children. Commentators write that the world should be a little more humane, that not so many should die of hunger. “Fewer?”  It’s pure hypocrisy.

We have to put an end to a system in which some must scramble for bones while others pile up dollars. We need a world where capitalism is no more.

First published in Spanish on December 1 in La Izquierda Diario.