A new mass movement for Catalan self determination has emerged. 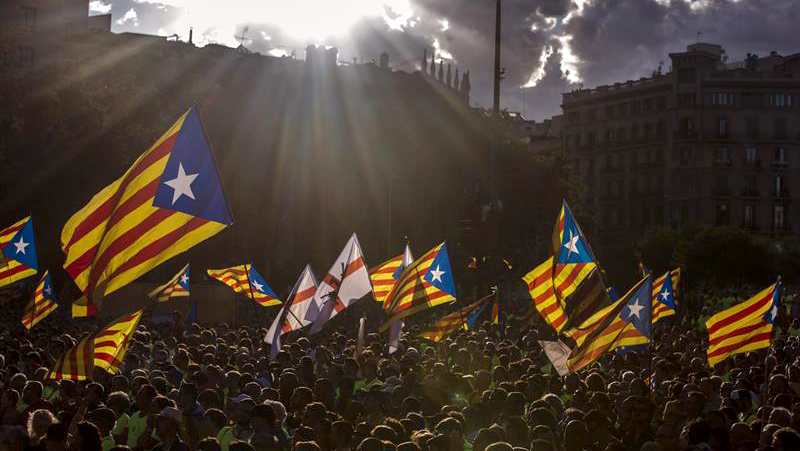 The escalating tensions over the past few weeks in Spain over the question of Catalonia’s right to self-determination has brought about a major political polarization of those in favor of the right to self-determination and those supporting Prime Minister Mariano Rajoy’s (Partido Popular) government. This increasing tension resulted in a General Strike on Tuesday, October 3 in response to violent acts committed by police during the October 1 referendum.

The violent repression of referendum voters at the hands of the state resulted in close to 800 injuries. It also awakened a profound democratic sentiment throughout the entire Spanish state, even among those who do not consider themselves pro-independence.

The Spanish state has played an oppressive role in most of the nations over which it has historically ruled — the Catalans, the Basques, the Andalusians, and the Galicians. The defense of the Catalan people’s right to self-determination is set within this historical context. Under Franco’s dictatorship (1939-1975), languages were forbidden, flags were outlawed, and oppressed nationalities were violently suppressed.

Following his death, King Juan Carlos I rose as the leader of the Bonapartist restoration, summoning all bourgeois political forces to smoothly administer the transition to constitutional democracy and prevent the possibility of a rupture . This resulted in the Constitution of 1978, a foundation that perpetuated the monarchy’s dominance over public affairs and the subordination of communities in Spanish territory while also guaranteeing an incomplete democracy and continued dominance over Catalonia and other peoples in the State such as the Basques and Galicians.

The Spanish State’s reluctance to alter its constitution to allow for a provision ensuring the right to self-determination is not surprising given that Barcelona, capital of Catalonia and Spain’s second-largest city, accounts for close to 19 percent of Spain’s total GDP. Catalonia has a total GDP per capita greater than that of South Korea or Italy, and it is one of Spain’s most important industrial regions, making up a quarter of Spanish exports and 23 percent of all industry in the entire Spanish State.

While just a few years ago, pro-independence sentiment was not supported by the majority in Catalonia, the millions of people who have taken to the streets in the past few days to oppose the police repression and support the right to vote reveal a shift in public opinion. The change is also a result of the social discontent that has been growing since the capitalist crisis and the Regime of ’78.

Who Supports the Referendum?

While only around 40% of the Catalan electorate voted, this was in large part because the vote was severely compromised by the theft of thousands of ballot boxes and extreme police violence to prevent voting. 90% of those who voted were in favor of independence.

Any political force that claims to be democratic and progressive should side with the self-determination of the Catalan people, but secession itself is not always a progressive demand. Although the question of Catalan independence has now sparked massive popular support, the “right to decide” was initially promoted by the Catalan bourgeoisie which has been discredited over the years by corruption scandals. Opening the national question is an attempt to divert attention away from social discontent felt by the Catalan proletariat as a result of recent austerity.

The Catalan bourgeoisie and petit-bourgeoisie wants to promote an independent capitalist republic or even a renegotiation of the terms of their autonomy vis-à-vis the Spanish state, (which were set during the transition from a centralized Francoist state). However, there are still illusions that the European Union could come around to support Catalan independence — the same same EU that didn’t hesitate in quashing a Greek mass movement when their government tried to negotiate the repayment of the debt. The creation of a bourgeois Catalan republic would require its exit from the EU followed by a reapplication for membership which would also mean the abandonment of the use of the euro as official currency.

In the past few days, with uncertainty over the outcome of the referendum for Catalonia’s independence, stock markets have been falling and Catalan firms have been relocating, or considering relocating, to other regions of Spain. On Thursday, Banco de Sabadell, the second-largest bank in Catalonia, decided to move its headquarters from the region and was followed by CaixaBank, the largest bank in the region and the third largest in the Spanish state. The moves suggest a fear about remaining within the EU since Sabadell is regulated by the European Central Bank and the Bank of Spain.. On Wednesday, Spanish stocks saw their biggest drop since the Brexit referendum in the U.K. last year, which caused shockwives across the continent.

What is certain is that even though the bourgeoisie tries to control the direction of the mobilizations, they have created openings for an independent mass movement. The Catalan working class cannot forget that Junts Pel Sí (United for Independence) is the party responsible for the cutbacks and the repression of working people and that the Mossos, the regional Catalan police who have been held up as heroes in news the past week for refusing to obey orders by Rajoy’s government to repress the vote, is its repressive arm.

The politics of Podemos and of the Izquierda Unida, who proclaim their defense of the “right to decide,” also fail to represent the interests of the Catalan people and the working class in their call for an impossible “referéndum pactado” or an “agreed referendum” authorized by the Spanish State. Podemos leader Pablo Iglesias has asserted on numerous occasions that the referendum must be conducted only through legal avenues. This would inevitably mean an amendment to the Spanish Constitution, which currently does not contain any provision for the question of the right to decide. Such “legal” means would require a three-quarters vote in Congress — that is to say, there would be an easy way to squash any possibility for the vote. Following the vote for independence, Iglesias has urged Rajoy for “mediation” with Carles Puigdemont, president of the Generalitat of Catalonia.

Though Catalonia’s regional parliament had planned to meet on October 9 to discuss the referendum and plan an official statement, a Spanish constitutional court has dissolved the session in an effort to block moves towards independence. Undoubtedly, the Catalan bourgeois will bolster this to strengthen their plan for a capitalist and independent Catalan republic.

But the fight against capitalist oppression can only be won by the whole of the Spanish working class united together — not only Catalans, but immigrants, Basques, Galicians, and the working class in the rest of the State. Revolutionary socialists reject the reformist approaches of Podemos and the Izquierda Unida, combat any proposed alliance of students and the working class with the bourgeois, and take up the nationalist question from the position of class independence.

The Necessity of Class Struggle

In this political scenario, the masses of workers and students fighting against the oppression of the Spanish State are being radicalized. The left wing of this movement is advancing radical democratic demands as a way to expose the complicity of the Catalan bourgeoisie and build a bridge towards socialist politics. The CRT (Workers’ Revolutionary Current) is calling for free and sovereign constituent assemblies throughout the entire state in which self-determination of all peoples can be decided upon, including putting an end to the monarchy and the pact with the Catholic Church. The aim of these measures would be a workers’ state with nationalization of public services and the bank under workers’ control. The fight for these constituent assemblies would plant the seeds for a struggle against the Regime of ‘78 and its parties and institutions.

The fight for the independence of Catalonia is, today, a popular struggle for self-determination and against the oppression of the Spanish state. The working class has entered the scene and is legitimately fighting for its democratic rights. It is a promising development that could spark a countrywide movement for the independence of oppressed nations within the territory of the Spanish State. The only path towards the victory of such a movement is the unity of the workers of the whole of Spain against the Crown and the Regime of ’78. This unified force will fight for the self-determination of all peoples and for total independence from capitalists of any nationality.