Catalunya: A Letter to the Young People in Prison

As millions of people in Catalunya have taken to the streets to fight for the right to self-determination, many have been thrown in prison by the regime. The anticapitalist youth organization Contracorrent (Against the Current) sent this letter to the young political prisoners. “The best solidarity we can send is to continue the struggle to break the chains of this system.” 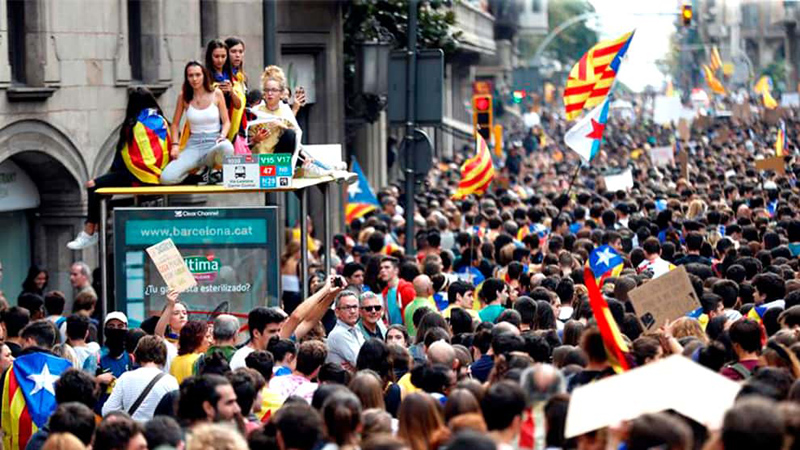 We are young people, just like you. We have certainly marched together in the same demonstrations, the ones that start at the gates of the universities and the streets of our barrios.  Perhaps we saw each other on Monday, walking and singing on the way to the airport. Or maybe we crowded into the subways together, shouting: “Freedom for all political prisoners!”

Some of us demonstrating today are so young that this is our first time in the streets. We have not forgotten how the police ransacked our schools to keep us from voting in the independence referendum on October 1, 2017 (1-0). Today we are mobilizing against a draconian legal judgement meant as a  collective punishment for the Catalan nation.

Perhaps we saw each other as the police used tear gas and beat us with batons, and maybe we helped each other when we fell down and had to resist or flee. Or maybe we recall helping to flush tear gas out of the eyes of people hiding from the police in some alleyway. Most certainly we felt the same sense of outrage when we read about such humiliating episodes in the news, or when we saw images of people being mutilated while the streets ran red with their blood. Or when we witnessed the arbitrary firing of rubber bullets and tear gas, which wounded hundreds of people.

Today, there are 31 new political prisoners, in addition to the 9 just sentenced by the courts, and in addition to the 7 detainees of the Committees in Defense of the Referendum (CDR) in custody since September 23. Most certainly we felt the same sense of indignation when we saw them wheeled away in blue police vans, and we thought to ourselves: That could have been any one of us.

To Xavier, Edu, Ferran, Germinal, Jordi, Alvao, David, Robert, Oahu, Marti, Paula, Laura, Joan, and many more, we want to tell you that we are together in the struggle, side by side. We will never stop working for your freedom because we understand the sacrifice you have made for us all.

In different cities around the country, such as Madrid, Zaragoza, Bilbao, Donosti, or Granada, young people are demonstrating their solidarity with the struggle of the Catalan people and for your freedom.

We are also following the recent upheavals elsewhere, in Chile and Ecuador, where people are mobilizing against neoliberal regimes. They’re also facing massive repression. In the case of Chile, a state of emergency has been declared and the military is in the streets. In Latin America and Europe, our generation is at the same time exhausted and enraged, because our future thus far has been in the hands of repressive capitalist regimes which never stop unleashing their brutality upon us.

This letter was written by a youth group, Contracorrent (Against the Current) .  Even though they tell us we are the future, in reality we have to struggle to make the future our own. We must break the chains of oppression and exploitation. We did not vote for the politicians of this regime and its king. They are the ones who have exploited our families and evicted them from their homes They are the ones who expelled us from the universities with higher and higher fees.

Again, we send you our solidarity, our strength, and our encouragement, to all of you who have been unjustly imprisoned, your families, and friends. We are with you in the streets. You are not alone. We will continue to struggle for all of you until your day of freedom! May our rage be transformed into struggle and organization!

First published in Spanish on October 23 on IzquierdaDiario.es.